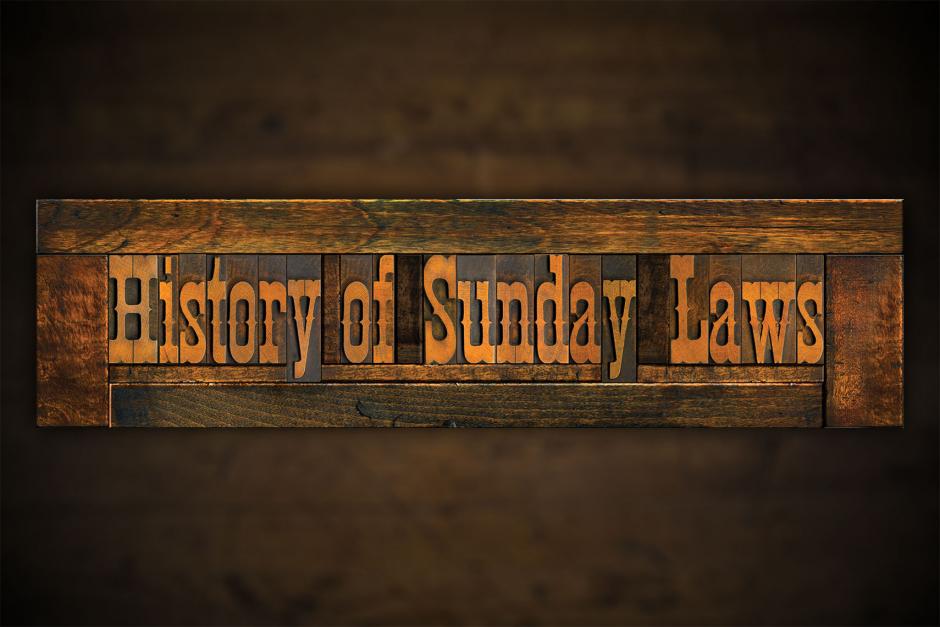 The history of Sunday legislation in the United States shows a mass of contrary, inconsistent, and illogical cases and distinctions. The following instances help to prove this:

"No trial can be had on Sunday. The only trials which a lawyer can then lawfully be subjected to are those which he undergoes in listening to the clergy who make him a frequent object of reproach. The only permissible court on that day is such as lovers, according to immemorial custom, pay to the object of their adoration."

In Massachusetts in 1816 it cost Officer John Atwood just $500 for upholding the Sunday law that made illegal either riding or traveling done on the Lord's day.

One Jonathan Dwight was shocked to see George Pearce riding on Sunday "against the peace and the dignity of the Commonwealth of Massachusetts." He rushed to the nearest magistrate, and a warrant was issued on his complaint. The warrant was given to Officer Atwood to serve on Pearce, and the officer, seeing his duty, took the lawbreaking criminal into custody that same Sunday. In fact, he locked him in the local jail from Sunday noon until Monday morning.

But Monday morning Pearce became plaintiff, not defendant, and sued the officer for false arrest. First, he explained to the court that the local magistrate had jurisdiction to order the arrest of only those of his own county who rode on Sunday. He was from another county.

Next he showed the court another statute that prevented any work or business on Sunday except "works of charity or necessity." Since the arrest was certainly not a work of charity, and since Pearce was well known and would have been available for arrest the following day, his incarceration was not a work of necessity.

The Methodist Episcopal Church of Sweetster Station, Indiana, had favored Sunday legislation until the Supreme Court of Indiana in 1878 was called upon to interpret a Sunday law, with that church as plaintiff.

Defendant Catlett, after listening to a soul-stirring sermon by the church pastor, had emerged into the sunlight of a new day. There was the love of fellow man in his heart, and he determined to show his appreciation in a material way. He subscribed then and there to the church building fund.

But when the effect of the sermon had worn off, Catlett resumed the errors of his ways and refused to pay his subscription. When sued by the church for breach of contract, he called attention of the court to the Sunday law, so heartily subscribed to by the preacher, that upon the Sabbath one shall not work or conduct business of the any sort.

In effect the Supreme Court of Indiana said the contract was illegal because it was made on Sunday; therefore, the church could not collect.

George Washington, in his diary under date of November 8, 1789, refers to a journey through Connecticut, and tells of the effect of the state Sunday law upon him: "It being contrary to the law and disagreeable to the people of this state to travel on the Sabbath day, and my horses, after passing through such intolerable road, wanting rest, I stayed at Perkin's Tavern (which, by the way, is not a very good one) all day; and a meetinghouse being within a few rods of the door, I attended the morning and evening services and heard a very lame discourse from a Mr. Bond."

Some modern advocates of enforced Sunday rest claim that if places of worldly amusement are closed on Sunday, men will attend church services and thus be benefited. Washington's comment concerning the type of sermon he heard leaves the conclusion inevitable that forcing men to attend church cannot force them to be interested in what the preacher has to say. It is well known that most of the world's greatest preachers have not only not had the support of the civil authorities, but many of them have also had the active opposition of the civil powers.

In an early Florida case (10 Fla. 558), authority is cited for the proposition that Sunday extends but from dawn on Sunday to sunset the same day; therefore, jury deliberation held between midnight Saturday and sunrise Sunday is not illegal on Sunday, since it is still Saturday!

What Is a Sunday Law?

In California in 1858 a Sunday law was construed as an intent to enforce as a religious institution the observance of a day called sacred by the followers of one faith, and was therefore declared unconstitutional because it was a discrimination in favor of one religious profession. (Ex parte Newman, 9 Cal. 502.)

In a lengthy 1882 decision the Supreme Court of California held the Sunday-closing law constitutional, saying, "By virtue of her sovereignty, the State has guaranteed freedom of religious opinion and worship to all religious bodies and people within her boundaries. But in granting those guaranties, she did not relinquish to religious bodies, nor divest herself of the power to establish a day of rest as a municipal institution for the people of the state. That power was reserved to be exercised over all the members of the body politic, without reference to whether they are Christians or Hebrews, followers of Confucius, of Gautama Buddha, of Muhammad, or of Joe Smith; or those who say in their hearts, "There is no God." Subject to that reservation, every citizen of the state is left free to his intellectual convictions and emotional fervors upon subjects of the unknown and unknowable. All are equal in the laws, in positions under the law, and in the administration of the government. No legal distinction or discrimination can be made between them. But, thus protected, all are subject to the municipal institutions established by the State. And in establishing a day of rest as one of those institutions, the State has the right to determine what day ought to be observed by the people.The duty of observing the day is imposed on the people of the state as members of the body politic, without reference to the religious faith and worship of any." (Ex parte Koser 60 Cal. 177.)

In Ex parte Jentsch, California held a Sunday-closing law, exclusive to barbers, unconstitutional. The supreme court there substituted its judgment as to the real purpose of the law for that of the legislative, saying (page 474), "How comes it that the legislative eye was so keen to discern the need of the oppressed barber, and yet was blind to his toiling brethren in other vocations" Steam-car and streetcar operatives labor through long and weary Sunday hours; so do mill and factory hands. There is no Sunday period of rest and no protection for the overworked employees of our daily papers. Do these not need rest and protection? The very suggestion of these considerations shows the injustice and inequality of this law."

In the case of Justensen's Food Stores, Inc., v. City of Tulare et al., the Supreme Court of California in its ruling said:

"We do not perceive by what process of reasoning the conclusion is reached that restaurants, confectioneries, dispenser of beverages, and other excepted businesses dealing in food for human consumption, should be free from inspection on nights, Sundays, and holidays, while grocery stores, in the interest of health, require such inspection. Can it be said that food products are more dangerous to health when sold in a grocery than when sold, for example, in a restaurant or confectionery store? From the standpoint of health, what distinction is there between selling food to customers on the premises and selling it to customers to be taken to their homes? Or why should a bottle of milk left on a doorstep by a dairy delivery company be deemed more sanitary or less subject to contaminating influences than a similar bottle sold over the counter of a grocery store?"

The court did not pass upon the question of Sunday sacredness. The attempt to close the stores was made upon the basis of "the public health, convenience, and general welfare of the people of the city of Tulare." The provisions of the act were declared to be "based upon an arbitrary classification and constitute an unwarranted and unreasonable interference with the carrying on of a lawful business, and are therefore violative of the Federal and State constitutions."

While in Colonial days, and in some of the cases tried in the early history of the nation, the question of religion did enter into the decisions by the courts, the tendency today seems to be strongly away from such a course. The advocates of Sunday laws now generally resort to a claim for their necessity from a health standpoint, and in recent times, Sunday laws have seldom, if ever, been upheld from a religious standpoint.

This article appeared in Liberty during the fourth quarter of 1939, a time of economic malaise and international conflict.