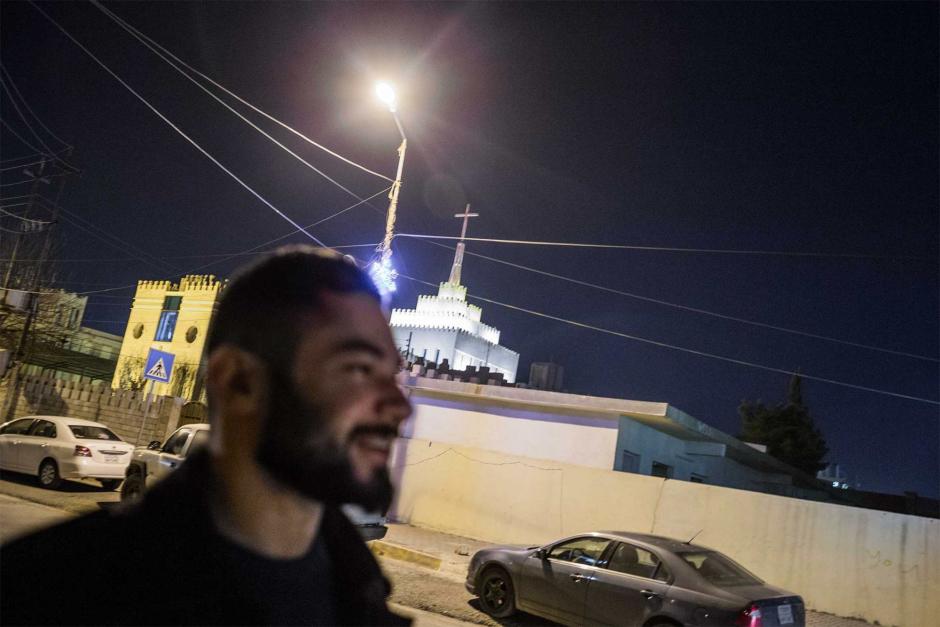 In Ainkawa, the Christian neighborhood of Erbil, Iraq, churches are protected by metal bars and armed soldiers. Speaking Arabic and Aramaic, the soldiers are dressed in the uniforms of the Peshmerga, the armed forces of the Kurdistan autonomous region of Iraq. The suburb of Ainkawa, located on the western limits of Erbil, seems vibrant and alive, with much social activity, clubs and even live belly dance shows. But it is only 50 miles away from Mosul, where the short-lived reign of ISIS destroyed churches and crumbled entire neighborhoods. ISIS took the lives of many and displaced the horrified survivors.

The Aziz family, regular attendants of the Mar Elia church of Ainkawa, vividly remember their untimely and unforeseen journey.

“On the evening of June 4, 2014, my company’s janitor informed me that a relative of his had joined ISIS and that we should leave, because that meant they had already spotted my house and my company,” remembers Nashwan Aziz, father of three. “We just packed a few suitcases and jumped in the car,” says Nashwan, covering the trauma of that moment with simplicity.

The Aziz family are among the remaining 300,000 Christians in Iraq.They, along with 500,000 other refugees, abandoned their houses to take shelter in the safer cities of the Kurdistan Autonomous Region when the ISIS advance reached Ninawa province.

With the schools, hostels, and all the other public buildings cramped with refugees, Aziz’s family had to spend about two weeks in the courtyard of Mar Elia church; many others could not find accommodations more convenient than tents in the park.

“We did not leave our home until we were sure there was no other way,” says Nashwan. “We weren’t afraid of death; we left to save our faith.” The Aziz family carries painful memories of the choice that ISIS put in front of Christians: “Convert and cooperate or stay and pay jizya [the tax levied on non-Muslim subjects, permanently residing in Muslim lands].” Sometimes the choice was even more stark: “Convert or die.” Nashwan and his family knew for sure that neither option would guarantee their lives: “Those ISIS bandits were just after people’s money and valuables. Christian or Muslim, converted or not, they always had a reason to kill,” says Antesar, Nashwan’s wife. Her voice breaks as she recounts the tragic fate of her brother-in-law. “Trying to escape, he came across one of the ISIS checkpoints and found himself surrounded,” To his horrified relatives, Antesar’s brother-in-law texted that he would verbally convert to Islam so that they would spare his life. “It was the only way he could reunite with his family again. But he had all his savings and valuables with him in the car, which was more interesting to the jihadists than the life of a terrified convert,” chokes Antesar. They never heard from him anymore.

At the age of 44, Nashwan remembers the time before “contagious chaos messed up the entire country.” When Iraq was safe and the lavish Christmas celebrations in Baghdad and Mosul were national highlights. “It was only in the aftermath of the U.S. invasion that the radical Islamists set out to spread hateful messages.” Nashwan adds that initially those messages seemed far too irregular and insignificant to be taken seriously. The appearance of ISISin 2014, with modern artillery and armored Humvees, came as an incomprehensible surprise to Nashwan and everyone around him.

An expert in heavy vehicle maintenance, Nashwan owned a truck repair and equipment company, while Antesar worked as a schoolteacher. Before ISIS swarmed Mosul, the hardworking couple had managed to provide a prosperous life for their children. Six months after the liberation of the city, Nashwan and Antesar went back to see what remained of their old house. “Everything was gone: in the ruins which we once called home, not even a single fork was left,” Antesar says. “We sold those ruins; Mosul, for us, is not a place to live anymore.”

At the moment they own a house in a newly constructed residential complex for Christians, which is protected by Peshmarga forces. “This house is much smaller than our past place, but it is still a home,” says Antesar while making fragrant cardamom coffee in their new kitchen. Nashwan has opened a small grocery shop in Ainkawa. The family has no plans to leave Iraq.

The girls are doing well at school, and their son helps them in the shop after finishing his homework. Antesar is planning to grow violet flowers in their smallish garden, and in every visit to Mar Elia, the family buys new religious figurines from the church’s shop to decorate their new home.

The fact that Christians have always lived safely in Ainkawa motivates the Aziz family to plan their future there. Some other attenders of Mar Elia church understand the ISIS horror only through media reports. Layth, born and raised in Ainkawa, is one of them. He believes that the Christian community’s well-being is of high importance for the Kurdistan regional government. “First of all, the state regards Christians as often more reliable allies than Arabs, and second, including Christians portrays a democratic and tolerant image of them.”

Layth’s sentiments are in accordance with an extensive set of policies that incentivizes and facilitates Christians’ stay in the Kurdistan Region. For example, according to the Directorate of Residency of Kurdistan, holders of Christian ID cards can freely traverse and reside in Kurdistan, while Muslim Arabs need to apply for permission.

“It is a win-win game,” asserts Layth. In spite of vast unemployment, corruption, and financial challenges that have frequently evoked public dissent, the majority of Iraqi Kurdistan Christians, in Layth’s opinion, are relatively well off. “Educated Christians are preferable job applicants, both for international companies and for state organizations. For most Kurdish university graduates, finding such jobs is an inaccessible dream,” he says.

At the age of 23, Layth works for a company that provides monitoring and surveillance services on mobile communications for the regional government. Pointing out the critical security challenges of Iraqi Kurdistan, Layth describes his job “a vital necessity.” He is never short of anecdotes and interesting information about the new tracking methods and smart observation technologies. Layth often shares good times with his friends after work at the Babylon Christian Community (BCC), a Christian-exclusive club. Visitors have to show their ID card at the entrance and have their handbags checked. The club’s immense exterior is a resemblance of Babylon’s Ishtar Gate, the ancient Mesopotamian architecture masterpiece that is now being held in Berlin’s Pergamon Museum. Endless references to Assyrian civilization can be spotted not only at the Babylon club, but on the shop windows, murals, and names of places all over Ainkawa neighborhood.Layth’s conversations with his fellows are in Arabic. Despite growing up in Kurdistan, he does not speak Kurdish very well; but he has “enthusiastically learned Aramaic, Assyrian’s mother tongue, in school.”

Puffing on his mint-flavored shisha (water pipe), Layth explains that “Christian Assyrians are actually the indigenous people of Iraq. They have lived in Mesopotamia ‘for thousands of years.’ ” In spite of the horrors of war and massacre that haunt them, the increasing number of new houses and small businesses that such Christian refugees as the Aziz family are creating shows that they share the same idea with Layth when he says, “Here is my home. I never felt otherwise.”

Giacomo Sini is a photojournalist from Livorno, Italy.He has visited 50 countries, photographing the social and political realities. Passionate about the Middle East and Central Asia, he has photographed many times the realities of conflict in Syria, Lebanon, and Kurdistan. He is interested mostly in refugees’ stories from conflict and post-conflict areas. He has been published inEl Pais, Neon Stern Magazine, L’Express, Humanité Dimanche, Il Manifesto, Corriere del Ticino, NZZ, Die Zeit, Taz, National Geographic, Il Venerdì di Repubblica, D Repubblica, The Week, and Kansan Uutiset.

=Giacomo Sini is a photojournalist from Livorno, Italy. He has visited 50 countries, photographing the social and political realities. Passionate about the Middle East and Central Asia, he has photographed many times the realities of conflict in Syria, Lebanon, and Kurdistan. He is interested mostly in refugees’ stories from conflict and post-conflict areas. He has been published inEl Pais, Neon Stern Magazine, L’Express, Humanité Dimanche, Il Manifesto, Corriere del Ticino, NZZ, Die Zeit, Taz, National Geographic, Il Venerdì di Repubblica, D Repubblica, The Week, and Kansan Uutiset.