In 1994 the village of Barrow, Alaska, made a desperate decision. It seems that the harshest polar region in the state, 340 miles north of the Arctic Circle, had a citizenry that was especially prone to binge drinking. Results of this "inebriated disorder" appeared like clockwork on a biweekly basis. The relatively peaceful town would erupt with crimes such as "rapes, assaults, weapon-related felonies, domestic violence, and public intoxication."1 Clinics, hospitals, police stations, and jails filled to overflowing with the victims and the perpetrators. The reason for the strange timing of the binges was that paychecks were distributed biweekly. As soon as the people of Barrow had money, they spent it on booze.

Over time, lost work productivity brought the bane of poverty. Alcohol abuse was costing consumers $350,000 every month. The borough spent nearly $7 million to remedy the situation, but an analysis of the social programs revealed that "treatment had not worked. Education had not worked. Nor had social or economic sanctions. Nothing had worked, and the community's culture and quality of life continued to deteriorate."2 In desperation the public safety director and the mayor initiated a campaign. They would work together to bring a total ban of alcohol. Barrow, they hoped, would go "dry."

A coalition of public service providers was formed. First, a campaign was put into motion in order to gain public support for the ban. A logo featuring a face with a tear under one eye and the slogan "STOP THE ALCOHOL, STOP THE PAIN" was adopted. Handbills and bulk mailers filled with hard-hitting statistics littered the town. Media and educational events, town meetings and radio talk shows were organized. Even the community's youth were involved with the effort. The ban won by a narrow margin, and the new laws took effect on November 1, 1994. Because of its insularity and remoteness (Barrow is not connected to a road system), such a ban was easy to enforce.

A Native American health-care worker from the local Inupiat tribe called the ban "the beginning of the salvation of our people." Crime dropped 70 percent. Alcohol-related emergency room visits dropped from 118 per month to 23 per month in the first 30 days of prohibition.3 Requests for police services dropped almost 80 percent.4

School attendance increased and regulated. Children enthused over better home lives, for parents who once neglected them for the bottle now invested in providing and in family togetherness. Doctors and nurses began to treat real illnesses and not merely alcohol-related conditions. Public arenas, once cluttered with inebriates, regained their tranquillity. Traditional values and cultural activism resurged. The collective IQ and self-respect of the town was reestablished. We might say that Barrow got its groove back.


A Sobering Question and
a Little History
This story poses a sobering question: Why was prohibition, which is generally understood to have failed in the U.S., a success in this community of 4,500 people? In attempting to flesh out an answer, let's consider a little history.

Prohibition was considered a failure because illegal alcohol and related crimes flourished during its 13 years. Speakeasies—private saloons—proliferated, and bootleg booze abounded, leading Will Rogers to comment, "Prohibition is better than no liquor at all."5 (Ironically, Will Rogers died in a plane crash in Barrow, Alaska!) Backwoods stills cranked out moonshine, and little old ladies brewed homemade hooch. The mixed drink is thought to have originated during the Prohibition era, when the foul taste of homemade liquor was only tolerable when masked over with fruit juices. One corrosive concoction mixed raw alcohol, glycerin, and oil of juniper together in the bathtub. This was served with large quantities of ginger ale to hide the flavor. But nothing could be done to hide the brew's damaging effect on the stomach lining.

Efforts to sidestep the law were flagrantly hilarious. The Volstead Act—which was passed by Congress to enforce the Eighteenth Amendment and so begin Prohibition—did not actually condemn the consumption of alcohol, but its sale. It also didn't prohibit the selling of products that would eventually ferment into alcohol. And so the wine brick made its debut. Roughly the size of a pound of butter, these bricks were grapes in solid form. Dissolved in a gallon of water and mingled with sugar, they would eventually become homemade wine. Since putting the directions on the package was illegal, the manufacturers of the wine brick printed: "DO NOT dissolve this brick in a gallon of water, add sugar and shake daily for three weeks. To do this would give you wine with 15 percent alcohol content."6 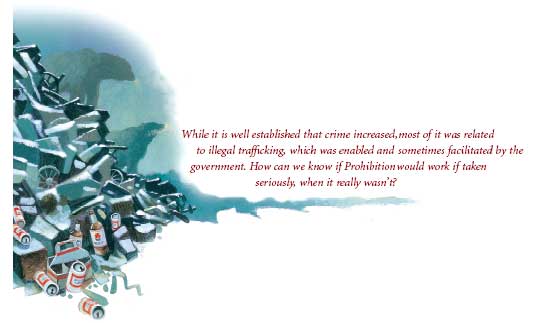 Apparently the law looked the other way for major infractions as well. During the era, a very profitable relationship developed between Berry Brothers & Rudd, a Scottish whiskey company, and the mobster Al Capone. Anxious to capture the growing market for their product, but circumvented by Prohibition, the Brothers would legally ship their Cutty Sark into the British colonial government's warehouses in the Bahamas. Once there, it would be sold to American gangsters who used high-speed motorboats to smuggle it onto the mainland, where Al and other gangsters would receive and distribute it. Exports of whiskey from Scotland rose from 944 gallons in 1918 to 386,000 gallons in 1922—two years after Prohibition began. George Rosie, author of Curious Scotland: Tales From a Hidden History, said that the co-conspirators "regarded Prohibition as an inconvenient legality."7

A smug noncompliance with Prohibition law seemed to permeate the halls of governance. Warren Harding, the first president during the Prohibition years, had liquor and vintage wines brought to the White House by customs officials who wanted to ingratiate themselves to him. Perhaps he served some of these gifts in his little house on K Street, where he threw private drinking parties. The Senate Library was known to be the most exclusive speakeasy bar in Washington. In the words of British journalist Edward Behr, "Everybody broke the law."8 Even Franklin Delano Roosevelt enjoyed his martinis during Prohibition. It was under his watch that the Eighteenth Amendment finally became the only amendment ever repealed. And so in 1933, 13 years after it began, Prohibition ended.

To Tame the Beast
Or did it? America's love/hate relationship with the criminalization of alcohol still wallows in the muddle of inconsistencies that are liquor laws. For instance, while all 50 states now have at least one commercial winery, 24 states forbid direct shipping of wine to consumers' homes. Twenty-three states don't allow the sales of spirits on Sunday; 27 do. In Oklahoma, beer is sold in gas stations, but neither gas stations nor grocery stores may sell wine. Wine lovers are happier in Vermont, where they may buy 3.2 percent beer and wine—which is sometimes more than 14 percent alcohol—in gas stations, but 3.3 percent beer is available only in state-run liquor stores. These hairsplitting attempts to tame the beast alcohol should tell us that we recognize its ferocious nature.

Alcohol is well established as the culprit in half of all homicides, rapes, and auto accident-related deaths. It also garners the prestige of being associated with 62 percent of assaults and 30 percent of suicides.9 In addition, medical research uncovers links between even moderate alcohol consumption and a myriad of health problems, including fetal alcohol syndrome, cerebral atrophy, chronic fatigue, gout, gastritis, hypertension, hypertriglyceridemia, cancers, osteoporosis, and obesity.10 The World Health Organization's advice on alcohol rings in stark contrast to the current hum of acceptance. Their catchphrase is, "the less you drink, the better."11 And that includes red wine, which is currently being touted as a wonderful health benefit, when in reality red grape juice does as much to prevent heart disease with none of the risk.


Self-Harm a Personal Moral Right?
But for most of us, desire determines belief. And this desire to have alcohol at our fingertips may determine the belief that Prohibition was a complete failure. While it is well established that crime increased, most of it was related to illegal trafficking, which was enabled and sometimes facilitated by the government. How can we know if Prohibition would work if taken seriously, when it really wasn't?

We can't realistically expect a repeal of the repeal. The Prohibition party has been reduced from a thriving influence on public policy to a meager group whose candidate appears on the ballot solely in Colorado, which allows any political party to nominate a presidential candidate. But looming on the horizon is yet another prohibition issue—that of drug legalization—which has significant support.

The proponents reason correctly that criminalizing drugs while legalizing alcohol is inconsistent. One such proponent points out that alcohol abuse results in the deaths of more than 100,000 Americans each year, while illegal drug use causes only about 3,500.12 This is a fact worth pondering, but the drug decriminalizers go on to imply that drugs would do less harm if they were legal and therefore controlled by the government. Don't such drug-legalization proponents consider the fact that the greater damage resulting from alcohol is simply because it is legal and therefore more rampant?

The same sources point out that drugs were considered a minor medical problem prior to criminalization in 1914. Now, under drug laws, the problem has burgeoned. What are these well-meaning souls implying? That the drug problem would have gone away? Just like the alcohol problem has gone away? The "forbidden fruit" factor is often urged as the driving force behind the black market. While a certain adolescent fascination with the taboo may initially fuel some illegal experiments, the allure of alcohol and drugs goes far beyond mere psychological intrigue. They are powerfully addictive substances that surge with pleasure all their own.

Social historian Tim Kelly says, "Prohibition by constitutional amendment was one of those rare attempts to control personal moral rights and it didn't work."13 Many would agree with him that drinking alcohol is a "personal moral right." But in the granting of liberties, the long-term, widespread effect of a practice must be the ultimate determinant. It is in keeping with the principles of religious liberty to criminalize harmful substances, if those harmful substances would wreak havoc on a society. To entertain the notion that self-harm should be granted as a right of conscience is to deny a basic law of human psychology stated succinctly in the song lyric "no man is an island." Our actions do not only affect us; they affect those who imitate and are influenced by us. Because of this interconnectedness, self-harm is never only that, and so self-harm should be legally prohibited. The result of granting individuals the "right" to buy, sell, and imbibe alcohol has brought incalculable damage to our world. All those who lament the damages sustained under Prohibition need to answer one simple question: Are things better now?


Back to Barrow
During the campaign to make Barrow dry, naysayers prophesied that the ban would lead to the deaths of alcoholics who would drink bootlegged poison. They swore that illegal drug use would escalate, that bootleggers would get rich and hospitals be overcrowded. "Prohibition has not worked before," they said, "and it will not work now!"

Another noble experiment would fail, they thought. But they didn't account for the possibility that the first wasn't conducted properly.