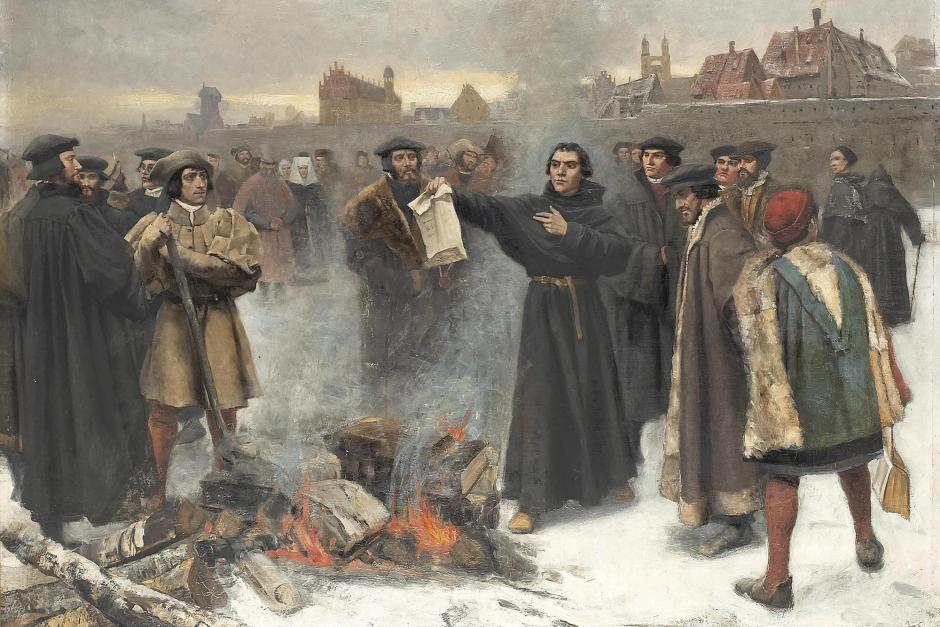 When Martin Luther King, Jr., marched on Selma, wrote a defense of civil disobedience from a jail in Birmingham, and proclaimed his dream of racial equality on the steps of the Lincoln Memorial, was he acting in any meaningful way in the tradition of his namesake, the sixteenth-century Protestant Reformer Martin Luther? Or were the connections to the unfolding stream of Protestant history merely historical accident or coincidence? Were their protests connected to each other by more than simply the universal human resolve to stand for conviction and truth?

To ask the question more broadly, did the Protestant Reformation play any positive role in the development of human rights in the West? Or did systems of human rights develop apart from, and perhaps even, as some would argue, in opposition to, the influences of Protestantism? The 500th anniversary of the publication of Martin Luther’s 95 theses in 1517 is an opportune time to reflect on these questions.

Perhaps the clearest modern point to start at to make the comparison between the two men is not the events at Selma, Birmingham, or the Washington Mall, as important as these events were. Rather, the principled connection between the two men may be best seen in a speech given by King, Jr., at Riverside Church in New York City on April 4, 1967. Fittingly, that was the year of the 450th anniversary of Martin Luther’s 95 theses, and it was then that MLK gave his controversial speech against the war in Vietnam. The speech was a turning point in MLK’s progression as an activist, as it signaled a shift to applying principles of justice, equality, and brotherhood beyond the Black community to problems faced by other people groups. In the following year, the last one before he was killed, MLK moved into working for economic justice, speaking on behalf of multiracial coalitions of the poor and disenfranchised.

The Riverside Church speech, with his foray into commentary on international politics and his criticism of the Johnson administration, caused him to lose some support in the White community, the media, and the press. But it revealed that the principles he espoused truly were universal principles, not just tools and justifications for the advancement of his own cause and people. The speech is notable for its reliance on arguments about the universal brotherhood of humanity. As he said in its opening paragraphs, the road that led from Montgomery to this speech could be explained simply that “I must be true to my conviction that I share with all men the calling to be a son of the living God. Beyond the calling of race or nation or creed is this vocation of sonship and brotherhood, and because I believe that the Father is deeply concerned especially for His suffering and helpless and outcast children, I come tonight to speak for them.”1

This appeal to the universal brotherhood of humanity was a theme that he returned to throughout the speech, and again with special force at the end. He mixed this theme with a more negative critique of Western capitalism that, unrestrained, caused those in the West to value money and things more highly than people. He noted that the wars in Southeast Asia originated from the economic goals of colonialism, and that America was stepping into the shoes of the French, who had been the original exploiters of Vietnam.

America, he argued, was also stepping into the colonizers’ role of using force to protect overseas investments. He called for a “radical revolution of values,” where we “must rapidly begin the shift from a ‘thing-oriented’ society to a ‘person-oriented’ society. When machines and computers, profit motives and property rights, are considered more important than people, the giant triplets of racism, materialism, and militarism are incapable of being conquered.”2

He then brought the speech to a climax by calling again for the recognition of the universal brotherhood of humanity, based on the principle—not sentiment—of love. “This call for a worldwide fellowship that lifts neighborly concern beyond one’s tribe, race, class and nation is in reality a call for an all-embracing and unconditional love for all men. . . . This is the calling of the sons of God, and our brothers wait eagerly for our response.”3

This dual concern of MLK, the brotherhood of humanity, and the corrosive effects of materialism on that brotherhood, provides an interesting parallel with Luther’s efforts in 1517 and the following years. We most often think about Martin Luther in connection with justification by faith, the authority of Scripture, and the centrality of grace. But we probably would not have heard of these concepts in connection with him if he had not wrapped them up in an attack on what he viewed as the corrosive effects of materialism on the spirituality of his age. Historians agree that Luther’s insights into these theological matters were not original with him, but had been seen and written about by other religious thinkers. But it was Luther’s attack on a corrupt system of finance, power, and spirituality that brought these other issues front and center.

The 95 theses themselves do not say much about justification, faith, or Scripture. But they do talk a great deal about the corrupting effect of the sale of indulgences on a true understanding of repentance and salvation. “They preach only human doctrines,” he writes in thesis 27, “who say that as soon as the money clinks into the money chest, the soul flies out of purgatory.” Also: “It is certain that when money clinks in the money chest, greed and avarice can be increased” (thesis 28). Says thesis 36: “Any truly repentant Christian has a right to full remission of penalty and guilt, even without indulgence letters.” As far as those who sell the indulgences, and confuse the faithful about the path of salvation, thesis 72 urged: “But let him who guards against the lust and license of the indulgence preachers be blessed.”4

MLK accused the American government of allowing materialism and avarice to interfere with and “poison” the American soul in its relation to universal love for humanity; so Luther criticizes the power structure of his day for allowing the materialism of the system of indulgences to blind church members to the true pathway to God of repentance and grace.

But MLK’s call to universal brotherhood is perhaps where the greatest parallel between the two men lies. Though only implied in the 95 theses, Martin Luther was developing a powerful idea about the equality of persons before God that is termed the priesthood of all believers. Every person, Luther believed, had the right and duty to approach God directly for repentance, justification, and salvation. As these truths were revealed in the Word of God, everybody had the equal right and duty to study that Word for themselves. As both praying and studying became personal duties, there was no need for the mediating role that the priests and the church hierarchy would play between the believers and God. The notion of an elite “spiritual” class and authority was set aside for a view of fundamental spiritual equality of all believers, and eventually all humanity.5

MLK’s views extended the boundaries from all “believers” to all “humans,” but it was based on the same fundamental notion that as all are the children of God, then all are responsible to Him, and have a dignity that should be respected by all. The foundations of MLK’s thought regarding human dignity lie in the universal truth of the image of God in humanity.

As one MLK scholar summarized it, King built this idea of human dignity on four related points: 1. All persons are children of God and have equal value and dignity. 2. This equal worth becomes the basis of “just and fair treatment.” 3. This dignity, brings with it a moral capacity that gives people the ability to make socially good choices. 4. This shared image of God provides the “existential common ground” for genuine community building across races, cultures, and ethnicities, making the “beloved community . . . a distinct historical possibility.”6

MLK used this shared dignity as the children of God as a platform to argue not just for the rights of Black people, but all people around the world. He challenged social institutions and norms, especially collections of financial interests and power, to treat people with the dignity they deserved. In doing so, he echoed the concerns of Martin Luther’s 95 theses, the development of the priesthood of believers teaching, and his protest at the Diet of Worms a few years later.

But it is one thing to show historical parallels; it is another entirely to show actual historical, genetic, connections. Can one trace the development of Martin Luther’s ideas in the West in a way that ultimately connects them with MLK and the larger movement for international human rights in the twentieth century? Such a project in fullness would be too ambitious for a mere article or two. But the broad outlines of such a story can indeed be traced, I believe, in a manner that would be helpful to our contemporary understandings of the idea and ideal of human dignity, and its connection with human rights. Such a historic overview gives context to the present struggle for international religious freedom and human rights.