I Walk the Line

William Wilberforce's legacy was possible for two reasons. First, he was a committed Christian. Second, he was also a member of the British Parliament. Because of the first, he had a burning passion against the institution of slavery. Because of the second, he was perfectly placed to do something about it. For seventeen straight years he introduced a measure to abolish slavery and failed every time. On his eighteenth attempt, the measure passed. Wilberforce lived to see the slave trade abolished in the entire British Empire a month before his death.

But was Wilberforce right to do what he did? Every biography points to his conversion to Evangelical Christianity as the turning point in his public priorities. His dogged determination to legislate the abolition of slavery was undeniably motivated by a morality anchored in his faith. By legislating his personal morality based explicitly on his religious values, did Wilberforce cross a line from secular advocacy to the legal enforcement of religion? 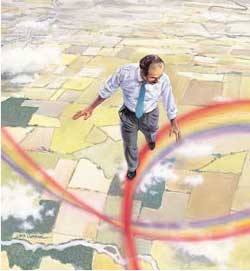 The question can be posed in other similar contexts. Was the Reverend Dr. Martin Luther King wrong to base his legislative efforts on his religious convictions? Were Gandhi, Washington, and Lincoln wrong to let their religious beliefs influence their public actions? Did Susan B. Anthony cross the line when her understanding of equality instilled during her Quaker upbringing persuaded her to fight for women's rights?
The answer to all these questions must be a resounding "No." Requiring public statesmen and women to abandon the underpinning of their morality when they operate in the public sphere would strip their public actions of the most important moderator. Further, to do so would deprive nations of the vital moral compass necessary to ensure the ship of state does not become the enforcer of such utilitarian nightmares as we witnessed in such aberrations as Communism and Fascism. Finally, such a separation of personal values from public actions is possible only in a world of fictitious actors. Whether enunciated or not, people are motivated by their most deeply held beliefs, and for virtually all humanity, our most deeply held beliefs are pervasively molded by religious values.

In fairness, what is generally meant by those who oppose legislating morality is that you should not legislate sexual morality. But what are laws pertaining to public nudity, marriage, divorce, rape, incest, prostitution and polygamy, if they are not laws legislating on matters of sexual morality? The state can, does, should and must legislate on matters of morality.

A second option is that legislators should avoid matters pertaining to the most intimate of human activities. In other words, that there is a private zone over which the government should not legislate.

There are two primary problems with drawing the line on the basis of privacy in this context. The first is that many intolerable acts based on religious morality were perpetrated not because of the victim's private acts, but rather because of his or her public acts. Thus, the privacy rationale is under-inclusive, at the same time it proves to be equally over-inclusive. Private actions, even the most intimate of actions, often have the most significant of public impacts. As one commentator put it, society may not have an interest if one person drinks to excess, but it certainly has an interest if 25% of the workforce does. Similarly, society may not have an interest if one couple divorces, but when half of marriages end in divorce with the resulting social dislocation of a large mass of children, society has an interest, often a most pressing interest, in the most private of actions when viewed in the cumulative.

This does not, of course, mean that government should regulate any given private action, but rather that as a general principle, drawing a line of demarcation around private action simply is unworkable.

Avoid Legislating on Matters Relating to God and Man

The final alternative to the quandary of where legislation informed by religious morality must end, is simpler, better and more organically sound. Simply put, it is that public officials should never attempt to legislate over matters of man's relationship to God. There are three primary reasons why this should be a firm line that should not be crossed.

First and foremost from a Christian perspective, is that Christ never used the arm of the state to force man into a compliant relationship with God. Force is antithetical to a religion based on faith elicited through love. Indeed, Christ Himself was murdered by the state for violating a blasphemy law. It is ironic indeed that in Christian history some claiming to be His followers perpetrated similar atrocities.

Secondly, a level of humility is necessary when dealing with the mind of God. God is in a unique position to regulate matters pertaining to His relationship to man. No individual or government is privy to a full understanding of His will, and for us to presume to punish crimes against Him is an act of hubris.

Finally, the overwhelming bulk of atrocities that have been committed in the name of religious morality involve governments punishing individuals for offenses against God. Drowning "witches," burning "heretics," stoning "blasphemers," prosecuting "Sabbath violators," destroying " idols," are all governmental acts aimed at punishing those who have committed crimes against God, not crimes against their fellow citizens. The tragedy of history requires us to recognize the folly of such religiously motivated laws and avoid them at all costs.

In conclusion, it is perfectly legitimate, indeed it is inevitable, that religious morality informs the public actions of national leaders. Indeed not only is it legitimate and inevitable, it is desirable. Religion provides the most conceptually sound basis of morality. Further, the true believer 's actions will be tempered even in private knowing that an all seeing God will judge in public the acts committed in private. There is a limit, however, to legislation informed by religion. This limit may well come in the realm of man's relationship to God.

On all other matters, there will be disagreement with morality based in religion typically informing both sides. That is why we have a democracy in which divergent views of morality compete to inform the way in which we choose to manage our society. Further, this is why we have carved out a limited set of fundamental human rights from the democratic process to ensure no matter what the balance of morality of any given generation, these fundamental rights cannot (at least in theory) be infringed by the legislators of the day.