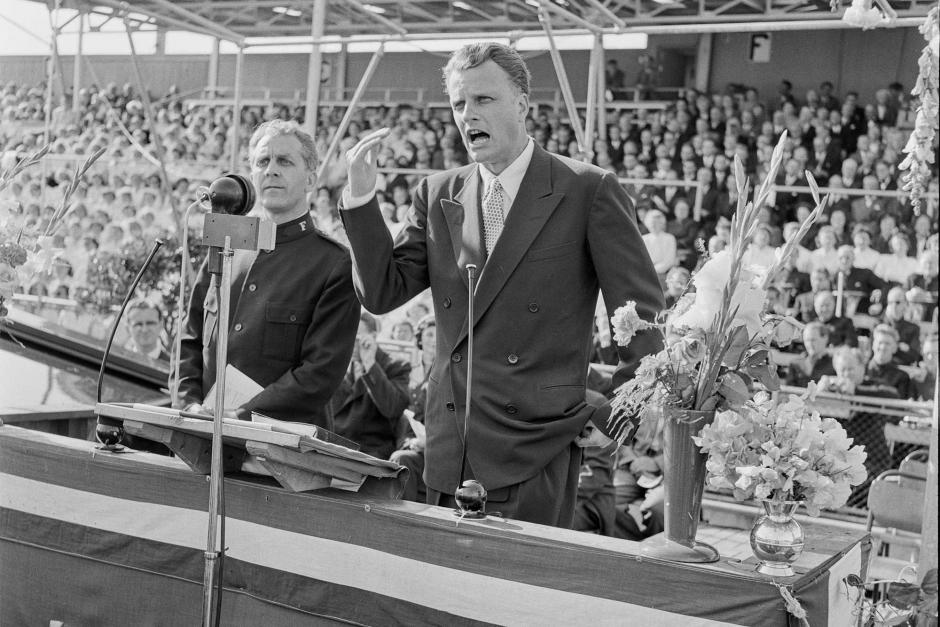 In the King’s Service

When Whittaker Chambers, the chief witness against Soviet spy Alger Hiss, reduced the cold war down to faith in God versus faith in man, anti-Communist secularists pounced. Leading the charge was the atheistic anti-Communist professor Sidney Hook, who asserted that the backbone of the resistance to Communism was made up of secularists like him.

But whatever the criticisms of these intellectuals, Chambers’ reductionism struck a chord among the populace and political figures. His Manichaeism ushered in the 1950s, where both Catholics and Protestants asserted that only a Christian America could defeat the “religion” that was Communism.

Because of this, the 1950s are probably the closest church merged with state, and vice versa in twentieth-century America. The 1920s did have a fundamentalist component, but there was no overarching foreign threat demanding that citizens—and presidents—march in lockstep with religious figures.

In Eisenhower’s America, however, there was not only a “cold war consensus” between Democrats and Republicans who, although differing on domestic policies, nevertheless closed ranks around a hawkish policy toward the Soviet Union; but a religious “consensus” among Catholics and Protestants as well who united in influencing those who crafted policy.

But no one had the ear of or influence on presidents more than Billy Graham. Graham, who died earlier this year, left his imprint on policy, and like a cold war zelig popped up at crucial moments during that era behind Truman, Eisenhower, JFK, LBJ, and Richard Nixon.

Graham’s influence was apparent in early cold war policy. According to Graham, he convinced then-president Harry Truman to send American troops to fight the Communist invasion by North Korea into the South in 1950.

Whatever the validity of this claim (Truman never forgave him for this), Graham’s religious influence was most evident during the Eisenhower administration. It was he who convinced Eisenhower to run for president, helped him write his inaugural prayer, convinced him to institute the National Prayer Breakfast, as well as putting “under God” into the Pledge of Allegiance.

Eisenhower in turn echoed Graham’s uncompromising belief that a Christian America was a “strong” America when the president asserted that it was the “patriotic duty” of Americans to attend church.

The best symbolism of this overlap between church and state occurred when Eisenhower convinced Graham to hold a religious service on the Capitol steps—the first preacher to do so. Graham’s influence with Eisenhower was so great that the latter asked for the preacher on his deathbed.

But Graham’s willingness to ally with other denominations had its limits. Regarding the candidacy of JFK, Graham organized religious opposition to the Catholic Democrat and rallied Protestants around Graham’s friend Richard Nixon out of fears that as president, JFK would be “controlled” by the pope.

Graham found commonality with those who shared his farm boy upbringing rather than patricians like Kennedy. With the plebian Lyndon Johnson, who was so close to Graham he wanted to make him a member of his cabinet (Graham once said that Johnson never “wanted me to leave the White House”), spiritual advisement merged with a hawkish support of the Vietnam War, as when he gave the president religious justification for continuing to fight against the Viet Cong.

To Nixon, Graham was equally invaluable: so much so that he offered Graham the position of ambassador to Israel. The friendship was strained, however, over Watergate, with Graham repelled by Nixon’s shenanigans and the president’s profanity recorded on the Watergate tapes.

Although Graham remained sturdily anti-Communist, something changed for Graham after Nixon. The cold war hawk now endorsed nuclear disarmament, and while in Russia laid a wreath on the graves of the Soviets who were murdered by the Nazis. He even found kind words for North Korean dictator Kim II Sung, regarding him as a “different kind of Communist,” and a fighter “for freedom in his country against Imperial Japan in World War II.”

But his fundamentalist opposition to atheistic Communism never wavered, and even when urging America and Russia to avoid a “nuclear holocaust,” he asserted that peace could only be achieved by “faith in Jesus Christ.” When the Soviet Empire collapsed in the 1989-1991 period, Graham felt vindicated in his particular brand of religious anti- Communism.

Graham had one last gesture of foreign policy support in 1991, when he endorsed then-president George W. Bush’s war in Iraq; the minister even endorsed Bush’s goal of a Pax Americana.

Graham never stopped endorsing presidential candidates; his last was toward the Republican—and Mormon—Mitt Romney. But he became more of a true spiritual adviser in time of crisis for presidents. He gave spiritual counsel to then-president Bill Clinton during the Monica Lewinsky affair.

But on domestic matters the fundamentalist remained. The figure who supported racial integration in the 1960s, making it a point to publicly ally with Martin Luther King, and stated that even those not of Christian faith could be “saved” by Jesus, was a fierce opponent of feminism. He regarded the “women’s movement” of the 1970s as a symptom of “the overall philosophy of permissiveness” in the era. The true role of women, he asserted was that of a “wife, mother, and homemaker,” as “laid out” in the Bible (he told his wife she could not be a fellow evangelist because she would be thwarting “God’s obvious will”).

He was also sturdily against gay marriage and urged states to ban it. He saw homosexuals as sinners, and the only way back to Christ was to convert to heterosexuality.

As much as possible given his fundamentalism, Graham was capable of some sort of political growth. Toward the end of his life he said that neither Republicans nor Democrats were religiously superior, stating that “Christ has no political party.” As such, this figure who exemplified the Christian anti-Communism of the 1950s was by the 1980s steering clear of the social conservatives of Jerry Falwell’s Moral Majority. Falwell’s deification of Republicans over Democrats repelled Graham, who once said:

“I’m for morality, but morality goes beyond sex to human freedom and social justice. We as clergy know so very little to speak with authority on the Panama Canal or the superiority of armaments. Evangelists cannot be closely identified with any particular party or person. We have to stand in the middle in order to preach to all people, right and left. I haven’t been faithful to my own advice in the past. I will be in the future.”

And these stances showed that Graham had, by the end of his life, shed some of the overlap between Christianity and the state he so fervently supported in the 1950s.