Is France Hostile to Religion?

Joseph K. Grieboski May/June 2004
After a rather short debate in the lower chamber of the French Parliament, the law banning symbols of religious affiliation in the public schools was adopted on February 10, 2004, with a majority of 494 votes to 36. Actually, the problem has a long history in France, reflecting certain characteristics of the political culture and national mentality that are worth contemplating because of the virtual impact on other aspects of the national life in a major Western democracy.
Through the Concordat of 1801 the Catholic Church lost some of its power in France; First Consul Napoleon Bonaparte imposed draconian controls on the activity of its clergy. Successive political regimes throughout the nineteenth century were constantly at odds with religiously minded people. The continuing spirit of the French Revolution was hostile to any remnant of religious thinking in affairs of state, and eventually pushed religion out of the public place. As the great French scholar Ernest Renan concluded: "Religion has become irrevocably a matter of personal taste."

The culmination of this process was the 1905 law on secularism, which to date is considered the fundamental text of separation of church and state in France.

As always, there was a political process in France that led to this radical legislation. The ideas of the French Revolution evolved into a doctrine of national ideology. The very word "ideology" came out of French thinking in the book Elements of Ideology by Destutt de Tracy, with an aim at creating a corpus of ideas replacing religion as a foundation for political beliefs. Later on, the French republic tacitly embraced the nationalism of the revolution as its social cement, uniting its citizenry under a homogenous culture, with the government as the "organizing principle of the social life." A contemporary French scholar, Pierre Rosanvallon, calls it the permanent Jacobinism of the French society, referring to the radical wing of the revolution that instituted the Reign of Terror as a means to deal with the enemies of the state. In the milder form subsistent today Professor Rosanvallon distinguishes three of its features: a tendency to see the country as homogenous and indivisible by ignoring the diversity of the civil society; the belief that society is able to express itself as a bloc by neglecting individual interests; and the inclination to trust the law to regulate society by absorbing all individual cases. To summarize such beliefs, we will see a perfectly coherent and totalitarian society, which would be an exaggeration as a model for contemporary France. Nevertheless, the danger is always present, and we need to be aware of it. 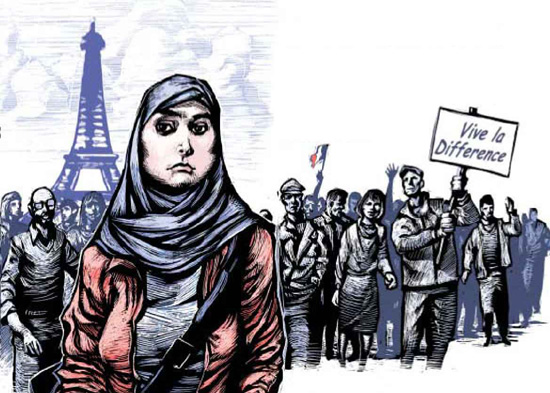 The fiery debate that preceded the February vote in the National Assembly animated the entire French society. The political parties, the entire press, the leading intellectuals, all wanted to add their voices in support of the ban on wearing religious symbols in public schools. Very few were the dissident voices calling for moderation. Any sign of strong adherence to a display of religious beliefs is perceived as a danger to the very foundation of the republic. It seemed rather strange to see all the luminaries of France—the intellectuals that enjoy so much authority in the society—calling for the intervention of the government in order to promote their cause, and for the use of the repressive power of the state. They all responded, in fact, to the instructions of the president of the republic on December 17, 2003, asking the government to introduce a law in the Parliament. As we have seen for almost two centuries now in France, the liberals are those who reinforce the powers of the government, creating the monopoly of state authority, and alienating the attributes of civil society groups by denying to multiculturalism a right to life in the republic.

Less obvious was the shifting of the accent from the anticlericalism and neutrality of the state contained in the 1905 law to a blatant antireligiosity in the life of the individual in the 2004 law. The ban on wearing obvious religious symbols does not promote impartiality of the government in dealing with its citizens; it only alienates their fundamental right of "observance," clearly stated in Article 18 of the Universal Declaration of Human Rights.

Whereas for certain individuals it is not mandatory to display any religious symbols, for others the absence of a turban or veil would mean a separation from their respective allegiance. In such cases the homogenization totally ignores the basic rights of the individual to assert his or her identity.
The trend that led to this controversial law has been obvious since the mid-1980s and the very visible input of a hard-core radical group of antireligious bureaucrats led by the infamous Alain Vivien, who issued a first report on sects in 1995.

In 1996 an investigative commission of the National Assembly created a list of religious groups perceived as dangerous for the French republic, and later on led to the adoption of the About-Picard law in June 2001. The law was designed to prevent and regress sectarian movements that attempted to undermine the human rights and fundamental liberties of individuals; however, the tendency was to hinder the activity of minority religious groups and new religions and to offer a legal basis for the constraints implied in the workings of the commission of 1996 and its list.

The major flaw of the law was that it didn't offer a legal definition of what a dangerous sect really is, and didn't qualify the infraction. A supervisory body, MILS (Mission minist