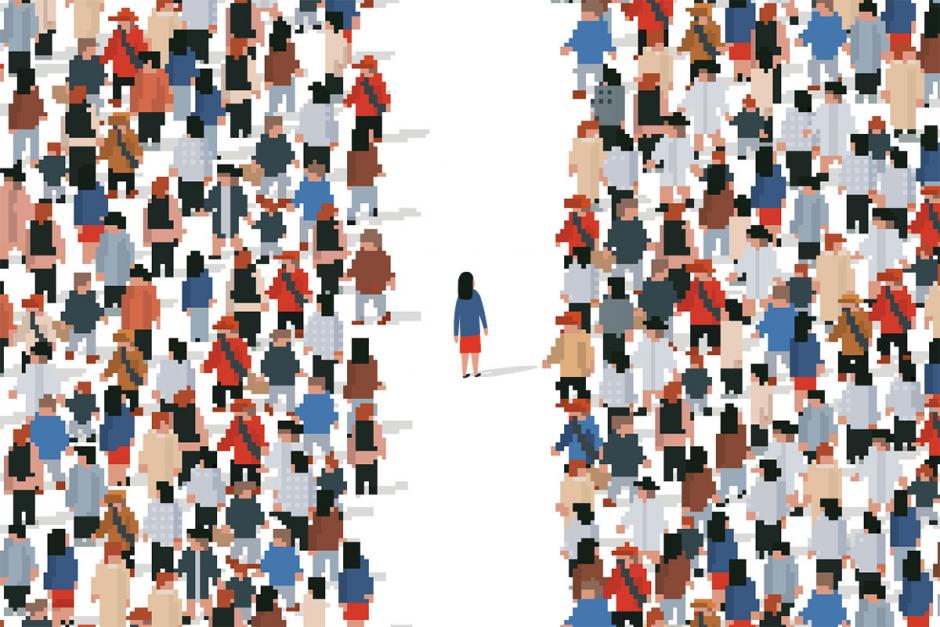 Clowns to the left of me, jokers to the right; here I am, stuck in the middle with you,” sang Scottish folk-rock band Stealers Wheel. It’s a song that has been used by everyone from Quentin Tarantino to Sacha Baron Cohen to put a bit of punch into their movies. It also pops up with curious regularity on television shows, and, maybe most surprisingly, IBM used it in a 2020 advertising campaign. Lately, however, I’ve been thinking about employing those lyrics in quite a different context: American politics. And it’s not just me.

It’s not that Independents are wishy-washy on the complex issues facing America. It’s just that they find neither party lines up with where they stand. Linda Killian, the author of The Swing Vote: The Untapped Power of Independents and former senior scholar at the Woodrow Wilson International Center for Scholars, groups Independents into four categories.

NPR Republicans, who are socially moderate and fiscally conservative.

The Facebook generation of voters younger than 35 who lean libertarian on social and economic issues.

Starbucks Moms and Dads, suburban voters who make up a huge chunk of the electorate and are reliably unpredictable.2

I’m not sure where I fit within those categories, as I’m pro-immigrant and pro-life, I’m pro-environment and pro-fiscal responsibility, pro-gun control and pro-racial justice, pro-public safety and pro-increasing the minimum wage, pro-religious freedom and pro-a humble foreign policy that prioritizes human rights and peace. These positions don’t fit into party doctrine, but they do fit neatly within a stream of Christian social teachings and are particularly close to my own denomination’s traditional views.

Parties, in contrast, don’t build their platforms around coherent ideologies; they pick them to form winning coalitions. That’s why they are adding and subtracting positions all the time. The Republican Party that was passionately pro-free trade morphed into the party of tariffs, while the Democratic Party of tariffs morphed into cheerleading the Trans-Pacific Partnership—the world’s largest free trade zone—before flipping back around and opposing it, to now more or less supporting it all over again. The party of individual freedoms wants to ban abortion, while the party of economic justice wants to reinstate a tax break to allow millionaires to deduct the property taxes on their luxurious estates in blue states like New York and New Jersey. They are all for it—before they were against it. Or against it—before they were for it. In the merry-go-round of party policy, sometimes it’s hard to remember which it is. If we rent out our intellects to political parties, we’ll get intellectual whiplash as we flip back and forth with the winds of party doctrine.

There’s another phenomenon that’s driving Americans out of political parties: as the parties become more doctrinaire, pragmatists are turned off. While Republicans are often seen as becoming ideologue extremists, respected liberal blogger Kevin Drum, relying on data from Pew Research, has pointed out that the Democrats have moved further to the left than the Republicans have to the right in the past two decades.4 The Republicans have remained fairly stable in their views but have moved on their methods. Each party has strong voices that are apologists for violence by groups that align with their perspectives. Moves to the extremes in one party cause a move to the extreme in the other. Like Europe in the 1930s, the extremes of the parties are mutually reinforcing each other.

Whether it’s because the major party platforms don’t line up with our values, or we view the parties negatively, or it’s the growing extremism in the parties, Americans are disengaging from our two largest political parties. Which is a problem.

The more pragmatic centrists who leave party politics, the more doctrinally rigid the parties become. There once was a healthy cadre of pro-life Democrats, for example, but they have largely been driven out of the party. Similarly, anyone with an ounce of moderation in the Republican Party is frequently labeled a RINO—Republican in Name Only. As the parties become more doctrinally rigid, the more Americans are left out. As the parties shed moderates, fewer and more extreme people steer them.

Which wouldn’t be a problem if a third, fourth, fifth and sixth alternative existed. They don’t. Americans only have two viable choices for president every four years, and the same goes for many other elected positions on the state, federal, and local levels. Most states—34 in the 2020 presidential elections—don’t have open primaries. In these states only registered Republicans can vote in Republican primaries, and only Democrats can vote in Democratic presidential primaries. As Americans leave the major parties, fewer and fewer Americans are selecting who will be our binary choice for president. No wonder many Independents scratch their head every four years, wondering how on earth, in a nation of 331 million people, the choice is again between two candidates they cannot stand.

Of course, independents don’t get the candidates they want; they have almost no influence in choosing them.

So how can Independents help moderate the increasingly extreme political climate?

The first approach is to sit back and enjoy deciding elections for candidates they despise. Yes, Independents don’t get to decide the candidates, but they are the Americans who choose every president. They are, quite literally, the swing vote. The problem with this approach is that nearly every election presents a binary choice. So yes, Independents choose the president, but that’s not much comfort if you’re forced to pick between what you view as two unpalatable candidates.

The second approach is to vote for a third party. The problem? Duverger’s law. Duverger’s law, developed by a French political scientist of the same name, states: “The simple majority, single-ballot system favors the two‐party system.”5 When we think it through, that makes sense. If there are three parties, voting for the least likely to win is a wasted vote. Even worse, having two parties on the left, for example, just divides the left-of-center vote, making it more likely the right wins. And vice versa. Other political systems operate in very different ways. But that’s them. This is America. We will have a two-party system for the foreseeable future.

Shy of an oxymoronic “moderates’ revolution,” that leaves just one more practicable alternative: the 44 percent of Americans who are too pure for the Democrats or the Republicans can become a little less untainted. Put another way, they can join the party that they’re marginally closer to and be part of the process of picking candidates that best reflect their positions. As they say: “You got to be in it to win it.” Of all unattractive options, this is the most likely to achieve the goal of moderating political discourse and nudging the parties back to the center.

In January of this year, 64 percent of Americans—almost two-thirds—expressed the view that American democracy is in crisis and in danger of failing.6 If that were not worrying enough, only 7 percent of 18- to 29-year-olds believe the U.S. has a healthy democracy.7 The civilization that defeated monarchism, fascism, and communism—and today is standing up to authoritarianism. The system that created arguably the most just, economically successful, and most stable large nation in history.8 The nation that remains the first choice of people all over the world “yearning to be free.”9 The nation that remains, as Abraham Lincoln put it, “the last best hope of earth.”10 This nation is in trouble. Our politics are failing. That’s one thing the jokers, the clowns, and the people stuck in the middle can all agree on.

The answer can’t be party disengagement; 44 percent of us have tried that, and look where it’s gotten us. Maybe it’s time for the purists to get a little dirty in the party trenches, working toward more perfect parties and, in the process, a more perfect union.

2 Linda Killian, “Five Myths About Independents,” Washington Post, May 17, 2012. I would argue, though, that calling NPR “socially moderate” is a misclassification, as NPR is consistently socially liberal.

8 Yes, the U.S. has a multitude of injustices and inequalities. But virtually every other diverse nation has more. Don’t believe it? Travel to Latin America and view the racial inequalities, or Nigeria or Myanmar and witness religious and ethnic violence, or India and explore the caste system’s legacy, or Western Europe and its struggle to integrate ethnic and religious minorities. Compared to the ideal, the U.S. is far from the mark. Compared to other options, it remains a shining city on a hill. That is why many people from all over the world still give up everything to get here.

9 Charlotte Edmond, “Which Countries Do Migrants Want to Move to?” weforum.org, November 22, 2017.