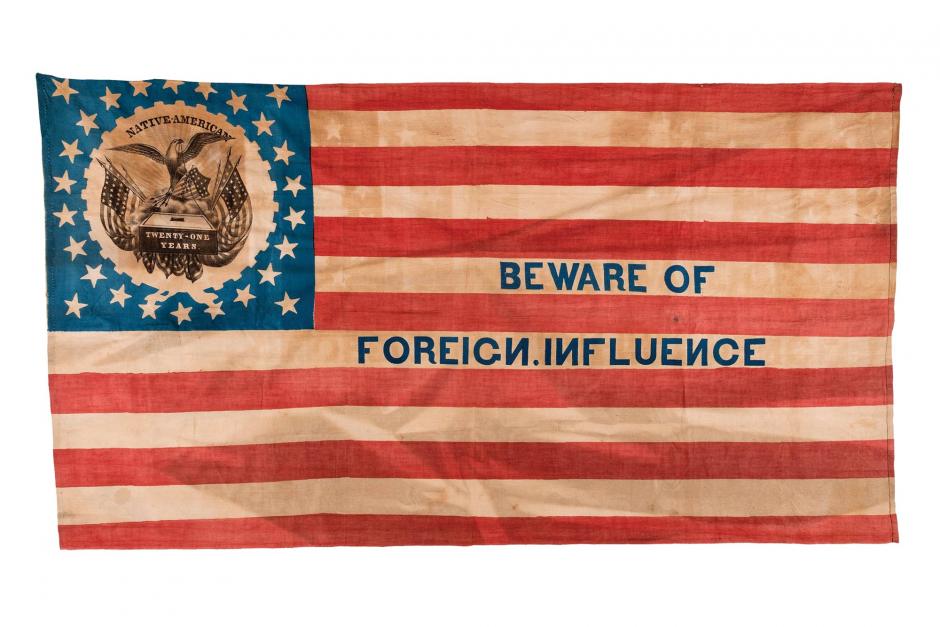 There was a nineteenthth-century American political party known to history as the Know Nothings. Do today’s right-wing movements, some of whom stormed the U.S. Capitol on January 6, 2021, warrant a comparison with that nineteenth-century political party?

To do so, we must examine just what the Know Nothing, or American Nativist, Party, whose greatest influence was in the 1840s and early 1850s, actually proclaimed.

The party was formed in reaction to the influx of Irish immigrants coming into the industrial Northeast; they feared this influx not merely because of the competition these workers posed for the native-born workers, but because of the belief that Irish immigrants were bringing un-American Catholicism in with them. In their worldview this was part of a “papal conspiracy” to take over Protestant America and destroy religious liberty.

Of this influx, historian James McPherson has written: “Immigration during the first five years of the 1850s reached a level five times greater than a decade earlier. Most of the new arrivals were poor Catholic peasants or laborers from Ireland and Germany who crowded into the tenements of large cities. Crime and welfare costs soared. Cincinnati’s crime rate, for example, tripled between 1846 and 1853, and its murder rate increased sevenfold. Boston’s expenditures for poor relief rose threefold during the same period.”

Out of a belief that the Democratic Party was honeycombed and controlled by these Catholic immigrants, nativist members defected, forming the American Republican Party in New York, Philadelphia, and Massachusetts in 1843. Membership was limited to the American-born. Violence against Irish immigrants followed. A year later in Philadelphia, Irish immigrants were beaten up by angry mobs, and two Catholic churches and a Catholic school were torched.

Merging with the Order of the Star Spangled Banner in 1849, nativists swore a secret oath, and used their influence to support candidates who shared their anti-Catholic views.

By 1854 this secret society had grown into the equally secret American Nativist Party. Their candidates did well locally, particularly in the Northern industrial area believed to be threatened by Irish immigrants. Newspaper editor Robert T. Conrad running as a Whig candidate for the mayorship of Philadelphia won on a platform of proposing a government populated only by the American-born. Other candidates won in San Francisco, Washington, D.C., and California. Because of these victories, membership in the Know Nothing Party went from 50,000 to 1 million members in 1854.

According to historian Tyler Abinder, the Know Nothings owed their success to the “collapse of the second party system” over the issue of slavery:

“The key to Know Nothing success in 1854 was the collapse of the second party system, brought about primarily by the demise of the Whig Party. Growing anti-party sentiment, fueled by anti-slavery sentiment as well as temperance and nativism, also contributed to the disintegration of the party system. The collapsing second party system gave the Know Nothings a much larger pool of potential converts than was available to previous nativist organizations, allowing the Order to succeed where older nativist groups had failed.”

But despite being anti-slavery, Whigs and Free Soilers organized against the Know Nothings by forming the “Anti-Know-Nothing Party.” Abraham Lincoln himself privately recoiled from the xenophobia of the Know Nothings. In an 1855 letter to Joshua Speed, he wrote: “I am not a Know-Nothing. That is certain. How could I be? How can anyone who abhors the oppression of negroes be in favor of degrading classes of white people?”

If the Know Nothings gained power, Lincoln believed that “foreigners” and “Catholics” would be excluded from the “all men are created equal” provision of the Declaration of Independence. Lincoln said he preferred living in Russia than an America controlled by the Know Nothings: “When it comes to this I should prefer emigrating to some country where they make no pretense of loving liberty—to Russia, for instance, where despotism can be taken pure, and without the base alloy of hypocrisy.”

However, the Know Nothings supported issues unrelated to xenophobia and quite progressive for their time. They championed equality for women and social programs for the working class.

But violence was often practiced by local Know Nothing members, who believed that Catholics were bringing in noncitizens to defeat “American” candidates. A street battle between Know Nothings and Catholics in Kentucky left 22 dead.

After a disastrous attempt to elect Millard Fillmore to the presidency, who refused to campaign on anti-Catholicism, the Know Nothings quickly declined in numbers and influence.

Much of this had to do with their focus on nativism and anti-Catholicism rather than the issue of slavery in the 1850s. Know Nothings who sought to gain influence in the South presented themselves as the middle ground between the pro-slavery sentiments of the Democrats and the emergence of the anti-slavery Republican Party. In short, on the eve of the Civil War, Americans were more focused on slavery, not anti-Catholicism.

It would be the issue of slavery that led to the Know Nothing Party’s collapse. Anti-slavery members had defected to the Republican Party by 1858, and by 1860 Know Nothings were no longer a political force on the national level.

How does this nineteenth-century movement compare to today’s right-wing movements? We can understand this better by examining two of the far right groups: the Proud Boys and QAnon members.

The Proud Boys was formed during the 2016 presidential election by Vice Media (a far-right website) cofounder Gavin McInnes. Along with Chairman Enrique Torro, a Cuban-African American, McInnes believes a “white genocide is being planned by the left.” McInnes openly advocates for violence and even finds Trump supporters wanting in this area: “Violence is a really effective way to solve problems. I want violence. I want punching in the face. I’m disappointed by Trump supporters not punching people in the face.”

McInnes sees violent street battles engaged in by the Proud Boys as ennobling: “The bonding and camaraderie this violence produces is inspiring.”

The group is males only, and they regard feminism as a “cancer.” According to McInnes: “There is a real war on masculinity in this country that starts in kindergarten and goes all the way to adulthood. And it’s not natural. I just think it’s taken so much away from the traditional family that it’s contributed to the degradation of the American family.

McInnes says that the group is composed of what he calls “proud Western chauvinists” who “refuse to apologize for creating the modern world.”

For McInnes, America should be Whites-only and not contain any “Zionists” or “multiculturalists”: “[We are for] the right of White men and women to have their own countries where White interests are written into law and part of the body politic.”

The most explicit religious tendency of the Proud Boys and other far right groups is found within their conspiracy mindset, coalescing around the QAnon conspiracy theory. QAnon, which, like the Proud Boys, emerged during the presidency of Donald Trump, is apocalyptic-minded. It holds that there is a “cabal” of “Satan-worshipping cannibalistic pedophiles that are running a global child-sex trafficking ring.” Their “messiah” has been Donald Trump, who is expected to engage in a final battle with the cabal, labeled a “Storm,” or “The Great Awakening.” The defeated cabal will be tried by a military tribunal and imprisoned. The military will “brutally take over the country,” which will result in the restoration of “White America’’ and a “utopia.” The impetus for their participation in the storming of the United States Capitol on January 6 was that Biden’s “false” victory was orchestrated by the “cabal” to maintain power.

The most apparent links between the Proud Boys and the Know Nothings is their conspiracy mindset, revolving around the perils immigration poses to American culture and a predilection for street violence. The Know Nothings believed that the large influx of Irish immigrants was part of a plot by the Papacy to destroy Protestant America and religious liberty. The conspiracy mindset of the Proud Boys and QAnon enthusiasts is more broadly political and cultural. For this group the left (composed of “Communists” and Antifa and the cabal that controls the government) is mounting a “white genocide” and with it the destruction of Western civilization. Like the Know Nothings, the Proud Boys see their religious foe as international in scope; composed of Muslims and Zionists.

However, the Proud Boys are more apocalyptic-minded than the Know Nothings. Their enemy is a cabal composed of Satan worshippers, and as such, requires a “messiah” in the form of Trump, who will wage a final battle with this cabal.

The Know Nothings had no such messiah, nor the support of a president. They had only a presidential candidate, Millard Fillmore, who, despite their backing, refused to campaign on an anti-Catholic theme. Trump, who once told the Proud Boys “to stand back and stand by,” consistently refused to condemn them directly.

Both groups engaged in street violence. Riots broke out in the 1840s in major industrial cities; the Know Nothings were behind the murders of 22 people and the burning of a Catholic Church and two Catholic schools. The Know Nothings sought to violently suppress any voting by Irish immigrants. The Proud Boys love violence and have shown up at events where their “enemies gather.”

Despite its attacks on the American left, the group has an internationalist bent. It frequently reenacts the 1960 murder of Inejro Asanuma, the leader of the Japanese Socialist Party, and praises such dictators as Augusto Pinochet. Some of its members have appeared with shirts supporting the Holocaust: “Six Million Wasn’t Enough.”

The most immediate link between the Know Nothings and today’s far right lies in their view of the perils of immigration. Know Nothings saw Irish immigrants representing a religious threat to Protestant America. The Proud Boys and QAnon believe that the immigrating foe is Muslims and the threat they pose to Western culture. McInnes has stated that “we need to close the borders now and let everyone assimilate to a Western, white English-speaking way of life.” The Know Nothings had a timetable for when immigrants could assimilate: a 25-year residency in America.

The most immediate conspiracy between the Know Nothings and today’s alt-right is their predilection for street violence. The Know Nothings used violence to keep Irish immigrants from voting such as an incident in 1844 by Know Nothings leader Bill Poole. The Proud Boys routinely show up at events to beat up Antifa and “leftists.” The most apparent difference however is the access to power.

Know Nothings were a local force, achieving their highest success at the gubernatorial level. Proud Boys were praised by President Trump, and several QAnon members appeared at White House-based “social media summits.” The presidential candidate supported by the Know Nothings, Millard Fillmore, refused to have an anti-Catholic plank.

Despite their dislike of immigrants, the Know Nothings were not pro-slavery or explicitly racist. The Proud Boys lumps Muslims and Blacks in with the threat posed to them by the “left.” Along with QAnon they have expressed anti-Semitism.

The Know Nothings membership came from the Northeast. The Proud Boys members are predominantly from the southern United States.

The most obvious difference was the scope of both groups’ violent protests. Know Nothings violence never reached the national level, as it did with the Proud Boys, who helped storm the U.S. Capitol on January 6.

For all their nativism and street violence and their belief that American culture is threatened by immigration, the Know Nothings were anti-slavery and pro-feminist. The alt-right, as personified by the Proud Boys and QAnon enthusiasts, have a far more apocalyptic view.