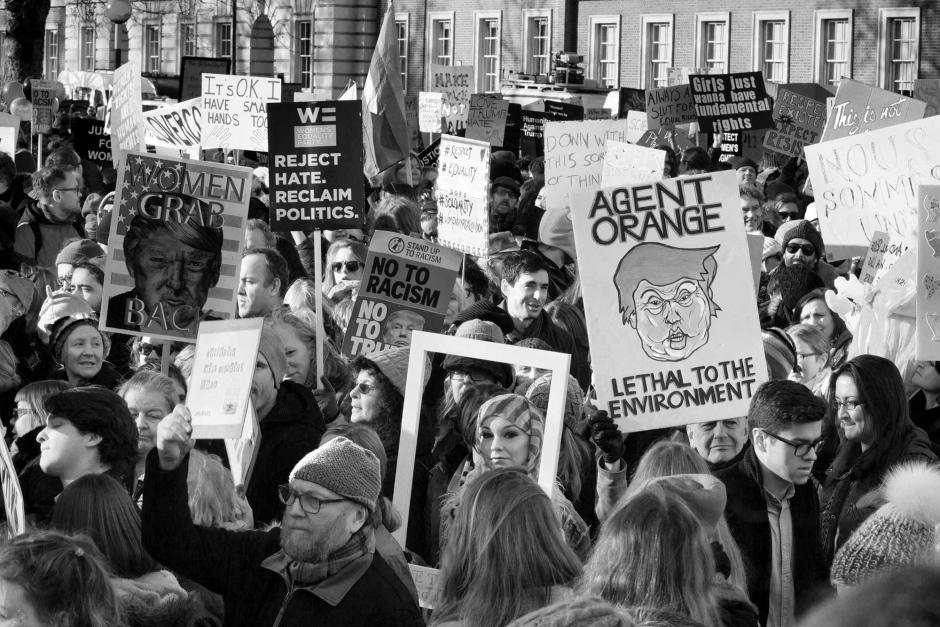 On March 21, 2019, President Donald Trump signed an executive order that protects freedom of speech on college campuses. Perhaps no one understands the need for this executive order better than Matthew Vitale. A student at the University of California at Riverside, he was verbally and physically accosted by another student who was offended by the red MAGA hat that Vitale was wearing. In a videotaped recording of the incident, that other student, Edith Macias, forcibly grabs the hat from Vitale’s head, and when he pleads for her to give it back to him, she embarks on a profanity-laced verbal tirade. She repeatedly points to the MAGA hat and says that it “represents genocide.” Vitale informs Macias that freedom of speech gives him the right to wear the hat, and she responds by saying that “your freedom of speech is literally killing people.”

Therein lies an issue that has been simmering on college campuses ever since Donald Trump was elected president in 2016. The issue is that there are some people, like Edith Macias, who are convinced that Trump’s supporters are promulgating White supremacism. These people believe they have a moral duty to censor the seemingly hateful messages being articulated by Trump’s supporters; and the one place where such attempts at censorship have been most prevalent is on America’s college campuses. There is an active effort on the part of some groups and individuals today to use threats and intimidation, both verbal and physical, to discourage Trump’s supporters from voicing their opinions on college campuses. That is the reason it seemed necessary for President Trump to sign the executive order to protect free speech at colleges and universities throughout the United States of America.

The official name of Trump’s executive order is: “The Executive Order on Improving Free Inquiry, Transparency, and Accountability at Colleges and Universities.” Section 1 of the order declares that its purpose is to “promote free and open debate on college and university campuses.”It then notes that free inquiry is an “essential feature of our Nation’s democracy, and it promotes learning, scientific discovery, and economic prosperity.” The order then says, “We must encourage institutions to appropriately account for this bedrock principle in their administration of student life and to avoid creating environments that stifle competing perspectives, thereby potentially impeding beneficial research and undermining learning.”

In Section 3 the order stipulates what measures shall be taken to ensure the protection of free speech on college campuses. The new order will require institutions of higher learning to certify that they are in compliance with the First Amendment in order to receive grants from 12 federal agencies, including the Departments of Education, Defense, and Health and Human Services (HHS). Federal funding will be withheld from those colleges and universities that do not protect free speech on their campuses.

Trump’s executive order is not without its critics. Some of them say the executive order is redundant, because it basically just rehashes the obligations that current federal laws and policies already impose on colleges and universities with regard to free speech. Jonathan R. Alger, president of James Madison University, told the Wall Street Journal that “institutions already take issues of free speech very seriously.”He also questions the logic behind making the disbursement of research grant money contingent on policies related to freedom of speech. Alger says that tying research grants to free speech is like “mixing apples and oranges.”

Another criticism of Trump’s order is that it does not furnish specific guidelines on how the administration would define infringement on First Amendment rights. Senator Lamar Alexander (R-Tenn.), the chair of the Senate Health, Education, Labor, and Pensions Committee, expressed his concern that this order would give the president the authority to define what can and can’t be said on college campuses.

Trump’s executive order on freedom of speech on college campuses is his first official action on the matter of campus free speech. However, it is not the first time that the president has offered an opinion on this topic. Back in 2017 Trump threatened to withhold funding from the University of California, Berkeley, after a scheduled speech by conservative firebrand Milo Yiannopoulos was canceled.

Trump’s executive order is largely an effort to address the concerns of conservative activists who complain about the hostile treatment they have received on college campuses since Trump took office. The president first teased the idea of an executive order during a March 2 speech at the Conservative Political Action Conference (CPAC), where he was joined on stage by Hayden Williams, a conservative activist who was punched in the face during a visit to the University of California, Berkeley, in February. Williams is not the only conservative to be on the receiving end of such belligerence during an appearance at a college campus. Ann Coulter and Ben Shapiro have both had to cancel campus speaking engagements because of violent protests.

College and university officials often point out that many of the individuals who engage in on-campus violence toward conservatives are not students or faculty; they are actually outside instigators who have no affiliation with the school. Therefore, it is the opinion of many college and university officials that Trump’s order is a misdirected effort to hold them accountable for something that is out of their control. But there have been instances in which colleges and universities, and not outside instigators, are to blame for attempting to obstruct an individual’s right to freedom of speech. For instance, in 2014, officials at the United States Air Force Academy removed a Bible verse that was written on a cadet’s whiteboard because they felt it might offend other cadets. Another example of free speech obstruction took place earlier this year when officials at Northeast Wisconsin Technical College tried to restrict Polly Olsen’s ability to distribute Valentine’s Day cards that contained religious messages. Trump’s executive order will make colleges and universities think twice before attempting to do similar things in the future.

In some instances it is financial considerations that compel a college or university to deny an individual the opportunity to speak on campus. Anytime a controversial conservative figure such as Candace Owens, Ben Shapiro, or Ann Coulter makes an appearance at a college, they will be accompanied by either threats of violence or actual violent protests carried out by their detractors. In response to this, the college or university will need to ratchet up their security, and that costs money. For example, Richard Spencer’s speech at the University of Florida forced that school to shell out an estimated $600,000 for security. Many schools may find such a sum to be prohibitive, and that is why they will deny someone like Spencer, Shapiro, or Coulter the opportunity to speak at their campus. But when they do that, the college or university is essentially sending the wrong message, and that message is that intimidation is an effective way of getting what you want. Whenever a conservative lightning rod is denied the right to speak on campus because of threats of violence, it emboldens those who utilize coercive measures as the way to try to silence the voices whom they disagree with. These individuals or entities will continue to use threats and violence at every opportunity until the voices of their intended targets are completely silenced.

Trump’s executive order sends a different message. The message is that the president is not going to idly stand by and allow left-wing bullies to use scare tactics as a way to usurp a conservative’s right to speak on campus.Trump’s order also sends a message directly to college and university officials as well. To them, the message is that they will be held accountable if and when an individual is denied the right to speak freely on campus. Last, Trump’s order sends a message to the conservatives who are striving to have their voices heard on college campuses. Trump is encouraging them to stay strong and not back down. As Trump said to the CPAC audience filled with conservative college students: “Keep standing up for your values.”

Donald Trump’s motives for signing this executive order may be purely political. He may have done it as a way to throw red meat to his conservative base. Perhaps the president wouldn’t have taken any proactive measures if liberals were the ones complaining about having their voices suppressed on college campuses. But partisan politics aside, the truth is that freedom of speech is vital to the health of a democracy. The Founders of this nation understood this, and that is why they included freedom of speech in the very first amendment to the Constitution.

When Donald Trump took the oath of office, he solemnly swore to protect and defend the Constitution of the United States. By signing Executive Order 13864, the president is doing just that.

Editor’s note: These are polarizing times, which are testing a gamut of social and legal norms. This executive action will perhaps act as a corrective to the growing intolerance of faith views on college campuses across the U.S. However, used as a flying wedge by those elements of conservatism that deride the liberal intellectualism they blame for a much of America’s ills, the action may only exacerbate the situation.