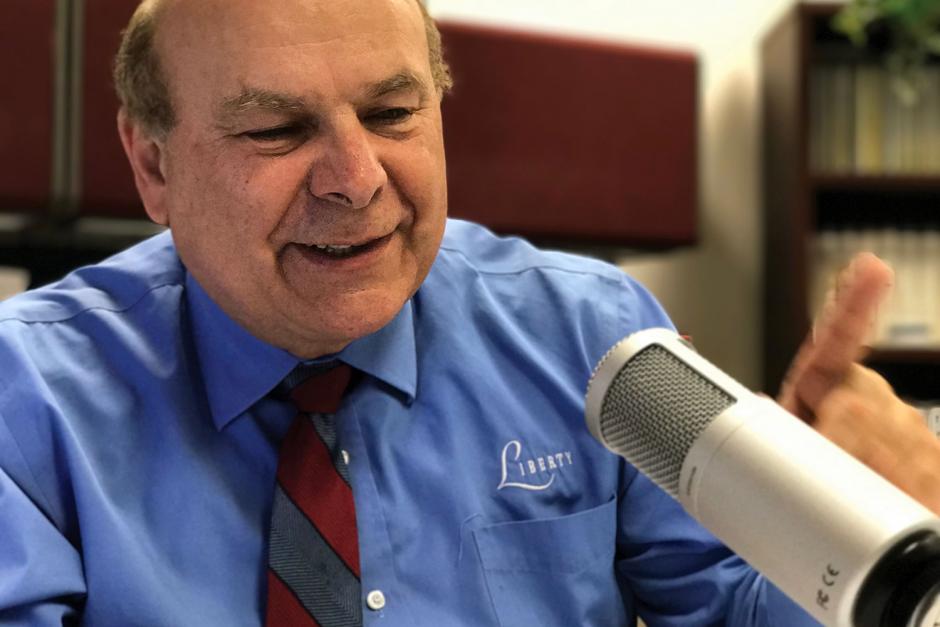 Liberty on the Air

“There’s far too much religion in this world.”

That statement coming from the editor of Liberty magazine took me by surprise. I’m sure many of our listeners stopped what they were doing and leaned just a little closer to their radios. How could a Christian journalist make such a startling statement, and during an international broadcast no less?

One thing I’m learning to accept as host of LifeQuest Liberty, the flagship radio program jointly sponsored by Liberty magazine and the Three Angels Broadcasting Network, is startling statements. Guests make them all the time. But I know that as soon as they’re expressed, the other shoe will drop, and what was once surprising will turn into something enlightening. This day was no different.

“Yes, there’s far too much religion in this world,” editor Lincoln Steed repeated, “and far too little spirituality.”

There it was: the problem, and the solution! Religion is simply a collection of individuals who interpret and follow a set of moral guidelines the same way—whether those guidelines originate from the Christian Bible, the Muslim Koran, the Hindu Shruti, the Buddhist Tripitaka, or the Book of Mormon. Each believer looks to his or her “sacred” text for instructions. All decisions, uplifting or otherwise, tend to spring from their reading and application of what they believe the “divine” words reveal.

That’s why you’ll find, under close examination, that most if not all of the armies involved in the major conflicts that have bloodied history march under a common banner: “We’re just doing what our god has instructed us to do.” The gods of religion have ordered their faithful followers to blow up airplanes, behead women and children, toss innocent people into gas chambers, burn dissidents at the stake, purge entire countries of heretics, and hang the Son of God on a rough-hewn cross.

Folks driven by pure spirituality, on the other hand, are too concerned about the human condition—about the equality of everyone they meet, about living a life of selfless service—to do anyone any harm. They want to build up, not tear down. They want to save, not destroy. Surprisingly, they’ve read the very same sacred texts as everyone else, but have come away with a very different set of marching orders.

Spirituality is what turned a simple nun into Mother Teresa. It’s what altered the life of a lawyer, motivating him to become Mahatma Gandhi. It’s the driving force behind every true act of kindness, every heartfelt word of encouragement, every pair of open arms ready to receive and minister to those who are different, marginalized, persecuted, or cast out.

So, it seems, Editor Steed is right. There is far too much religion in this world! What we need is a good dose of spirituality injected into the hearts and minds of people everywhere. When you combine the moral compass of spirituality with the deep-hearted fervor of religion, the result can literally change the course of history for the better.

Here we go again. This time it was Amireh Al-Haddad, director of the Southern Union Conference Religious Liberty Department, speaking to me from Atlanta, Georgia.

The concept of the U.S. government providing funds for Christian moms and dads to send Christian sons and daughters to Christian schools represented to me a much-needed financial shot in the arm for Christian education. But there was a problem. Ms. Haddad insisted that government assistance would come with government strings. This was already happening in some areas, forcing certain education institutions to rethink enjoying the ready inflow of cash.

“There are no shekels without shackles,” Amireh stated. “The government is never going to give you money without attached requirements, even for ‘opportunity scholarships’, as vouchers are called today.” She went on to add, “It’s like taking your first puff on a cigarette thinking you’ll never become a chain smoker. Before long, you’re dependent on that source of funding, and you can’t be released.”

I asked her for an example of where this leads. She offered one from a couple years back. “A Florida proposal for school vouchers insisted that (1) you can’t require a child to attend a religious chapel, (2) you can’t discriminate in hiring practices, and (3) you can’t select students from just your church body, but must open the school to anyone who wants to attend. Also, with the government’s fresh take on what constitutes male and female, your place of learning must provide transgender bathrooms.”

I ended that show convinced that Christian education should support itself the old-fashioned way: by depending on God’s blessings and church member generosity. That would be much more prudent for everyone involved, now and in the long run.

Liberty is a magazine on a mission, and it doesn’t care who it surprises along the way, especially if that disclosure jolts someone out of a dangerous lethargy. Religious freedom isn’t a given, nor is it guaranteed in most parts of the world. Even those of us who live in the more tolerant nations such as the United States must remain on guard, because, as it’s often said, the devil is in the details. Sometimes the danger is hidden where you’d least expect it.

That’s why, besides Liberty magazine, which has been in print for more than a century, there’s Liberty Insider, a weekly television program airing globally over the Three Angels Broadcasting Network; a growing and dynamic Web site, www.libertymagazine.org; and the radio program I host called LifeQuest Liberty. This short, pithy program reaches audiences around the world on both the 3ABN and LifeTalk Radio networks. The men and women who help create Liberty’s global outreach want people to read, see, and hear the truth, even when it’s not popular or generally accepted.

The Baker and the Clerk

“He should bake the cake.”

Remember the news report concerning a small business owner who refused to bake a wedding cake for a gay couple? Or how about the town clerk in Kentucky who refused to issue a marriage license for a same-sex marriage? I thought for sure that Editor Steed would come down in support of the baker and the clerk. I was wrong.

He told me over the air that when you run a business in this country, you can’t discriminate against self-proclaimed sexual identity, just as you can’t refuse service based on skin color. (Yes, some people of faith do want to use their right to restrict the rights of others, but Editor Steed sees a contradiction in that.) And the clerk in Kentucky? She had every right to personally withdraw her services in this matter, passing the license request to someone else in the office who didn’t feel so opposed to the gay and lesbian lifestyle. But that’s not what she did, and the rest is religious liberty history.

The Rule of the Day

“This is not a Christian nation.”

Time and time again, when referring to the United States of America, I’ve heard this phrase pass through the lips of very knowledgeable people. It’s a fact that would certainly shock most of my Christian friends on Facebook who insist that God is in charge, and that everything that goes on in this country is the direct result of His leading.

But, as my guests have said, America was designed from the ground up not to be tied to any particular deity or belief system. After all, most who formed this new nation were here in an attempt to escape religious persecution in Europe. The very last thing they wanted to do was set up a new government in which intolerance of various faiths was the rule of the day. They’d spent months on the high seas getting away from just that. So they’d bent over backwards, not to create a Christian nation, but to create a nation in which Christians and Muslims and agnostics and atheists and those who worshipped bugs and trees could feel safe to follow their conscience wherever it led—within civil constraints, of course. They even constructed what Thomas Jefferson characterized as a big wall of separation between church and state, insisting that “Congress shall make no law respecting an establishment of religion, or prohibiting the free exercise thereof.” To call the U.S. of A. a Christian nation is arguably to contradict the Constitution’s First Amendment.

And so it goes. Week after week, show after show, I ask questions, and the answers continually surprise me. But Liberty magazine has been surprising people for a very long time and will continue to do so as long as readers, viewers, and listeners insist on knowing the whole, undiluted truth.

Religious freedom is precious and worth fighting for. That same freedom must be shared with those who worship other gods, follow other faiths, or simply look to themselves for all the answers. Only then can religion become the spiritual force our world needs so desperately.