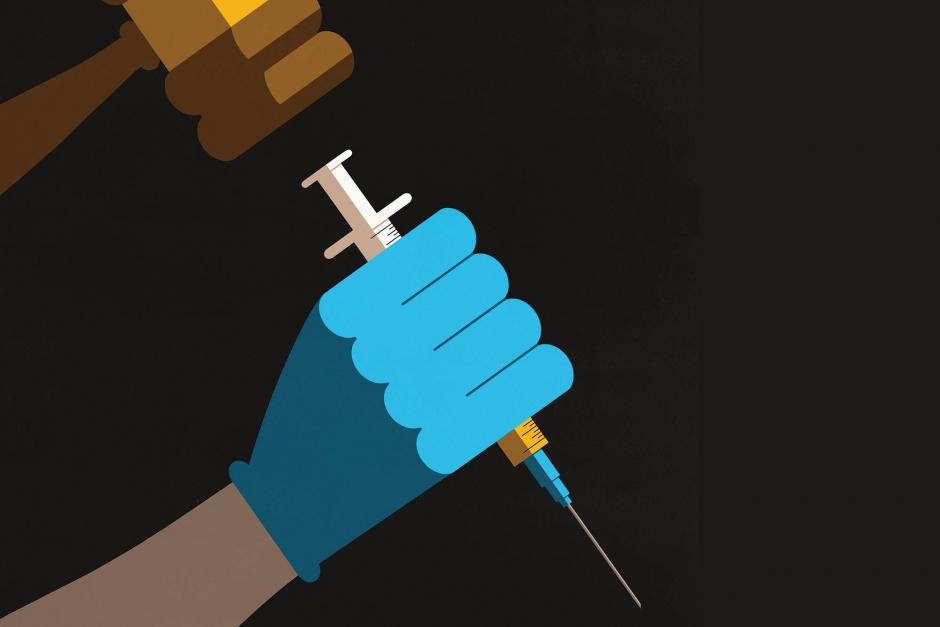 Mandatory Behavior - Rights in a Pandemic

Government accommodation of religious practices has been an enduring pillar of American liberty. In Hobbie v. Unemployment Appeals Commission of Florida (1987), the U.S. Supreme Court (8-1) said that: “This Court has long recognized that the government may (and sometimes must) accommodate religious practices and that it may do so without violating the establishment clause.” The idea is that when policies or laws burden a religious practice, the government has the responsibility to create—narrowly, perhaps—an exemption or accommodation for those practices. That is, unless the state can show a good reason to the contrary, the free exercise of religion takes precedence. That’s the idea, anyway.

Even the infamous 1990 Employment Division v. Smith—one of the greatest U.S. Supreme Court blunders since Minersville School District v. Gobitis (1940), when the High Court ruled that school districts could force (force!) Jehovah’s Witness children to salute the flag and recite the Pledge of Allegiance against their religious convictions (overturned three years later)—still allowed the for the principle of legislative accommodation. Of course, some saw that legislative accommodation as precisely the problem. If you were an Orthodox Jew in Brooklyn or a Mormon in Salt Lake City, you’d have a good chance of getting that legislative accommodation because of the power of democratic rule. However, for a Jew in Salt Lake City or a Mormon in Brooklyn, democracy would be working against you, which is why the claim of legislative remedy rang hollow in Smith, whose damage to free exercise has never been fully mitigated.

It’s one thing if an adult, based on religious (or even secular) reasons, chooses to make a potentially dangerous medical decision for himself or herself. The courts have allowed a fair amount of latitude there. When, however, parents make that choice for a child, the issue gets more dicey. And in the case of vaccinations, what happens if the choice potentially can harm not just their own children but others as well?

With the exception of clean water, the introduction of vaccines against infectious diseases has been one of the greatest contributions of public health during the past century. Polio, smallpox, measles, mumps, rubella (MMR), and whooping cough ravaged humanity, killing millions over the years, only to finally have been all but eradicated, at least in the Western world, as a result of large-scale vaccination programs. The idea, sometimes called herd immunity, is that once you get enough of the population inoculated, the disease is so contained that it no longer poses a threat. In short, for immunization to work, a lot of people need to be vaccinated. Otherwise, the threat of the disease remains.

What happens, however, when parents, for religious or even secular reasons, do not want to vaccinate their children? In such cases, free exercise, parental rights, public health, and other issues present competing claims. Is the government’s responsibility to protect public health compelling enough, legally, to nullify the free-exercise rights of children and parents opposed, for religious (or even secular) reasons, to some or all vaccinations? What role should the rights of parents, and the bodily autonomy of their children, play into the debate? And what happens when parents have religious objections to vaccinations?

What has complicated the matter in recent years has been the controversy of potential side effects of vaccinations. No question, vaccination does entail risks. (Of course, every medical procedure, even the most “benign,” entails risks as well.) There is always some chance that a child will have an adverse reaction, one that can be crippling or fatal. In fact, the U.S. Congress and Supreme Court have declared government-licensed and mandated vaccines as “unavoidably unsafe.” Also, about $3 billion in federal vaccine injury compensation has been awarded to children and adults under the National Childhood Vaccine Injury Act of 1986, which had been signed into law by Ronald Reagan in order to protect vaccine makers because of vaccine injury claims.

Despite the medical/scientific controversy, the law is pretty settled in America. In Jacobson v. Massachusetts (1905) the High Court ruled against a Swedish immigrant named Henning Jacobson who claimed it was “an invasion of his liberty” to be forced to have a needle thrust into his arm and having cowpox injected into his body. In a 7-2 ruling, the Court ruled that the government has an overriding interest in enforcing compulsory vaccination laws, even though in some cases medical exemptions could be allowed (it didn’t allow Jacobson!). Though people could not be physically forced, the Court said, they could be fined or even jailed for refusal. The Supreme Court reaffirmed its Jacobson decision in Zucht v. King (1922), which ruled that a public school system could refuse to admit a student who had not gotten the required vaccinations.

Because all 50 states have some kind of immunization requirements for entrance into public schools, problems arise when some parents don’t want to immunize their kids, including for religious reasons. Forty-eight states have religious exemptions to their vaccination requirements (only, interestingly enough, Mississippi and West Virginia don’t), challenges have been raised against these exemptions, and sometimes successfully, too. In other words, despite the exemptions written into law, they are not guaranteed. As with many religious freedom issues, there are pros and cons to the offers of religious exemptions for vaccinations.

The Pros and Cons

In some instances those seeking exemptions on religious grounds, arguing of course from the free exercise clause and claiming that to force vaccinations when they go against sincerely held religious convictions is to egregiously violate the most basic religious freedom rights. As far back as 1972, in the Yoder decision, the Court allowed exemptions for Amish kids not to attend school past a certain grade, contrary to state law. Advocates for religious exemptions claim the same principle here as well.

Meanwhile, though acknowledging what the Court did in Jacobson, advocates for exemptions argue that it’s not fair to impose now, in a different environment, a ruling needed for a specific threat. “In that era,” wrote Shaun McFall at the First Amendment Center, “smallpox infection rates were staggering, and the danger the disease posed to the public health was clear and impossible to ignore. Recognizing the severity of the danger, the Court found that a state had the right, under its police power, to require vaccination against smallpox. Many pro-exemption advocates find it problematic that those opposed to religious exemptions rely on a precedent established 100 years ago, and point to the fact that there does not exist today a disease prevented by vaccination that poses a threat to the public health that is comparable to that posed by smallpox.”

Those opposed argue mostly on the grounds of a “compelling state interest,” the idea that, considering the potential dangers of not vaccinating children who want to attend public school, the state should not grant these exemptions, either for religious or secular reasons. The use of vaccinations have, they argued, and justly too (it seems), done an incredible job in eradicating many diseases, and not to do it would create an unnecessary health risk for the population at large, but especially for children. Some cite a 1991 measles outbreak among a small religious community in Pennsylvania who requested, and were granted, exemptions from vaccinations. As a result, six children died from the disease. Again, the idea is that in order for immunization to have the best effect, the idea of “herd immunity,” the more vaccinated the safer everyone is, should take precedence over free exercise.

Also, the argument goes that while adults have the right to make risky medical choices for themselves, they don’t have the right to make those choices for their children—an often sticky and emotionally fraught religious liberty issue. Decades ago, however, the Supreme Court ruled (Pierce v. Society of Sisters, 1944): “Parents may be free to become martyrs themselves. But it does not follow they are free, in identical circumstances, to make martyrs of their children before they have reached the age of full and legal discretion when they can make that choice for themselves.” Those opposed to exemptions claim that the principle applies here as well.

In early 2015 the U.S. Court of Appeals for the Second Circuit rejected a constitutional challenge to a New York law that required vaccinations for all kids attending public schools. The case involved two parents, both Catholics, who had obtained exemptions. However, New York also had a separate regulation that stated that in the event of an outbreak, kids who had not been vaccinated must be excluded from school. And when a kid in the school got chicken pox, the ones not immunized were not allowed to attend.

The parents sued, losing in federal court before taking it to the Second Circuit, which also ruled against them, citing, among other things, Jacobson. The school was, ruled the court, well within its “police power” to mandate vaccinations for schoolchildren. Immunizations are, it said, “in the interest of the population as a whole,” and thus this interest trumps the parents’ rights, even their religious ones. The court brushed aside their claim that “a growing body of scientific evidence demonstrates that vaccines cause more harm to society than good,” stating that it’s a legislative prerogative, not that of parents or the court, to make a determination on the scientific evidence regarding the potential health hazards of vaccinations. The plaintiffs appealed to the U.S. Supreme Court, which turned down their appeal, thus upholding the circuit court ruling that the exclusion of the children during the outbreak did not violate their religious freedom.

The controversy, obviously, remains, and doesn’t show much promise of going away anytime soon. Somehow, between the courts and the legislative branches, this nation must find a way to balance the wonderful First Amendment promise of “the free exercise of religion” with the state’s interest in the protecting the well-being of all its citizens. The COVID-19 pandemic has killed hundreds of thousands in the United States and brought back memories of the Spanish flu of 1918. So much depends on an effective vaccine against it. We cannot afford to reject any vaccine outright, as such a “flat earth,” unscientific response will only extend the dying. But we owe it to ourselves and the larger society to somehow respect deeply held religious and moral inhibitions and to recognize that uncritical application in the past has led to some rather unsavory results.