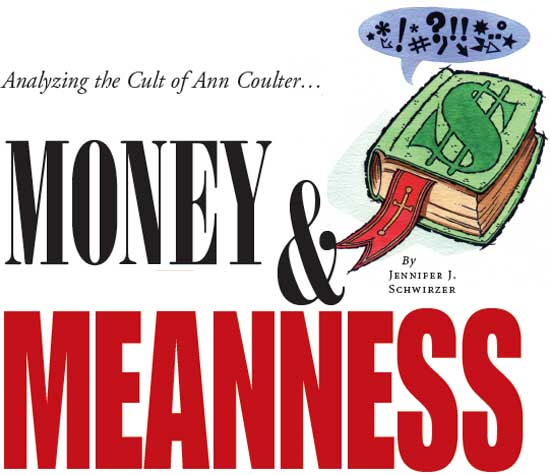 This past summer saw the release of a fifth book from radical right-wing author Ann Coulter. Since then, Godless: The Church of Liberalism has probably raised more hackles than all her other books combined. The day of its release she was interviewed by Matt Lauer of NBC's The Today Show . The conversation began as a civil debate, but quickly accelerated into a jousting match over Coulter's incendiary statements about widows of 9/11 victims who pushed for the creation of a 9/11 commission to investigate the cause of the attacks. Going in for the kill, Lauer quoted Godless verbatim:

"These self-obsessed women seem genuinely unaware that 9/11 was an attack on our nation, and acted as if the terrorist attack only happened to them. They believe the entire country was required to marinate in their exquisite personal agony. Apparently denouncing Bush was an important part of their closure process. These broads are millionaires lionized on TV and in articles about them, revelling in their status as celebrities and stalked by griefarrazis. I've never seen people enjoying their husbands' deaths so much."

Due largely to Lauer's interview, the model-thin, blond-coiffed Coulter soon adorned the covers of the Daily News , the New York Post , and the National Enquirer. Her book shot to number one on Amazon.com within a few days. While her assertion that the widows are millionaires is unsupportable, her own profits have well-exceeded that mark. Pointing her Midas-touch, accusatory finger at their supposed millions has earned her veritable millions. In her own words in response to the explosion of controversy surrounding the passage read in the Today interview: "We can keep this party going all summer. . . people become curious. . . and they buy the book and the message gets out." 1


Question: Is Ann Coulter an entertainment shock-jock, dishing up controversy for mammon's sake, or a Republican straight shooter who at times insightfully calls the bluff of liberal politicians?

The answer is probably Yes, Yes.
The "mean girl of the moment"
2
made a point in her diatribe against the 9/11 widows. While conservatives are not completely above the practice, liberals seem especially adept at granting automatic moral authority to victims. Consider Cindy Sheehan, who, after losing her son in Iraq, camped outside President George W. Bush's Texas ranch and demanded an interview, launching her career as America's "peace mom." Ironic, considering the fact that her son died a war hero and was posthumously awarded the Bronze Star Medal with V for Valor and the Purple Heart. In her vitriolic way, Ann Coulter was pointing out that the problem with antiwar proponents like the peace mom is that one is hesitant to argue with the bereaved. Even Los Angeles Times columnist Tim Rutten, who compared Godless to pornography, agreed that there is an argument here. 3 In one of her less venomous moments, Coulter says it this way: "Don't put up someone I'm not allowed to respond to without questioning the authenticity of their grief." 4
That's a respectful objection to a potentially manipulative practice. If Ann had expressed it that way in the book, it would have gone down in publishing history without provoking so much as a raised eyebrow.

And that may be the point. She wouldn't have moved product with that respectful, dignified approach. When she elected to use the "art of outrageousness," she created a hum that was heard around the world. And whatever her motives were, the ensuing controversy was good for business. Ms. Coulter seems to have bought heavily into the adage that there is no such thing as bad publicity. According to that philosophy, one can freely sabotage characters, judge motives, and insult persons, without so much as a blush of shame. It's all part of the shout-and-denounce game that has an appeal not unlike that of professional wrestling—but more civilized. Or is it? You decide after taste-testing Ann Coulter's pen at its most poisonous:
More on the 9/11 widows: "How do we know their husbands weren't planning to divorce these harpies? Now that their shelf life is dwindling, they'd better hurry up and appear in Playboy." 5


On Democrats: "Even Islamic terrorists don't hate America like liberals do. If they had that much energy, they'd have indoor plumbing by now." 6

On women at the Democratic National Convention: "My pretty-girl allies stick out like a sore thumb amongst the corn-fed, no make-up, natural fiber, no-bra needing, sandal-wearing, hirsute, somewhat fragrant hippie chick pie wagons they call 'women' at the Democratic National Convention." 7(Ms. Coulter was replaced as a columnist for USA Today after refusing to edit this comment, and dropped by the National Review for anti-Muslim statements.) 8


On her method of soul-winning: "We know who the homicidal maniacs are. They are the ones cheering and dancing right now. We should invade their countries, kill their leaders and convert them to Christianity." 9

Coulter is an example of the growing phenomenon of "new entertainment," which features the use of political extremes as a source of laughter and adrenaline. This is relatively new to the American scene, beginning in the 1990s with such media characters as Rush Limbaugh. Nor is the phenomenon confined to conservatives. Left-leaning Al Franken's book, Rush Limbaugh Is a Big, Fat Idiot , appeared on the scene in 1996, followed by Lies and the Lying Liars Who Tell Them: A Fair and Balanced Look at the Right, in 2003.

Perhaps the most prominent liberal media pundit is Michael Moore. Moore presents himself as the everyday-Joe-leftie with his finger on the pulse of the common man—a facade that speaks metaphorically, in that the very form of Farenheit 9/11 is a fa̤ade. Until the phenomenon of media provocation rose to its current heights, documentaries were understood to be factual, and dramas fictional. Moore spawned a mutation that retains the form that has historically signaled "fact" to the brains of media consumers, but in reality takes liberties with the truth.

Likewise Ann Coulter. Analysts and commentators toil diligently to dissect her charisma into bite-size, digestible pieces. They scratch their heads over her immense popularity, and gaze dizzily as her book sales soar. Ann offers a pretty smile and says, "I'm not surprised by the book's sales success. All my books have been huge best sellers, so I'm beginning to suspect that there's some interest out there in what I have to say."11 According to her, her claim to fame is that she speaks truth into the blitz of liberal lies, and is appropriately commended for it.

But does Ann Coulter speak truthfully? She has been christened with labels that range from "cunning satirist" to "comic genius." 12
Apparently some wonder if she believes her own script, the common perception among opponents being that Ann is more about showmanship and spectacle than she is about politics. Most likely, she would rebut with "provocation is the essence of persuasion," 13 but we would feel compelled to ask, "persuasion to buy into your politics or your book?" Most likely, she'd say there was no difference.

Could it be that in this age of accelerating printing presses, 24-hour cable TV, increasing radio options, and the ever-expanding Internet blogosphere, that it takes shock-jock tactics to rise above the ruckus? Could it be that more thoughtful, less rudeness-reliant conservative thinkers like George F. Will are less marketable and therefore less heard? A frightening thought, to be sure. Does Ann realize this competition factor and, keeping her eye single to the delivery of her message, nobly do whatever it takes to get the truth out to the world? Or are her eyes single to dollar signs and sales profile charts? We can't know for certain what's in her heart.

But according to her, at least, she knows what's in ours. A modern-day Pharisee, Ann Coulter judges others down to the substrata of their most hidden motives (see above quotes) while her own flagrant sins go unrepented of. Using her Cornell-educated cranium, she crunches her opponents with rapid-fire smarts and logic that is often irrefutable. She is high in the affections of conservative Christians, given their dismay with our culture's rapidly thickening moral turpitude. "I'm a Christian first and a mean-spirited, bigoted conservative second," she says, "and don't you ever forget it."14 How much more could Christians ask than to have their pro-life, intelligent design, and family values message rocket to the top of the media industry? But there is one small problem: she speaketh like the devil for the Lord.

What saith Ann's religion of her acerbic tongue? "If anyone thinks himself to be religious, and yet does not bridle his tongue but deceives his own heart, this man's religion is worthless" (James 1:26). And what of her angry accusations? "Let your gentleness be known to all men" (Philippians 4:5, WEB). What of her distain for opponents? "Love your enemies" (Matthew 5:44).

Are the enemies feeling the love? One article title says it all: "If Ann Coulter's a Christian, I'll Be Damned." 15 A Christianity that makes hell look good should at least be inspected for possible rottenness. When power, influence, and book sales push aside the love of God and man, a fatal compromise of religious integrity has taken place. It's only a matter of time before gangrene sets in. In today's marketplace, religious values are blended with politics and made merchandise. Like the holy wars of old, kingdoms are at stake. Then, the weapons were swords and arrows. Today, they are words. But the thirst for conquest can be the same in this day of verbal weaponry as it was when Pope Urban II launched the first crusade in 1095.

Let's not fool ourselves. The sin of journalistic violence has risen to ridiculous heights, profit margins notwithstanding. The same religion that condemns the murder of an innocent baby condemns the murder of a reputation. Those who reject evolution should act like human beings, not apes. Family values are about loving your fellow man, not hating your heathen neighbor. And don't you ever forget it.

In printing this opinion piece Liberty is not intending to descend into the abyss of hate talk that more and more passes for public debate. Rather we think it important for our readers to take a cold sober look at the genre and reflect on what is lost to freedom and, indeed religious freedom, when crude error and crude faith are enlisted in public debate. The very existence of the Ann Coulters and the Al Frankens and others of their tribe may well demonstrate the vitality of our free society. But their message may signal a moral sickness that oozes malignancy for America's religious heritage. Editor.