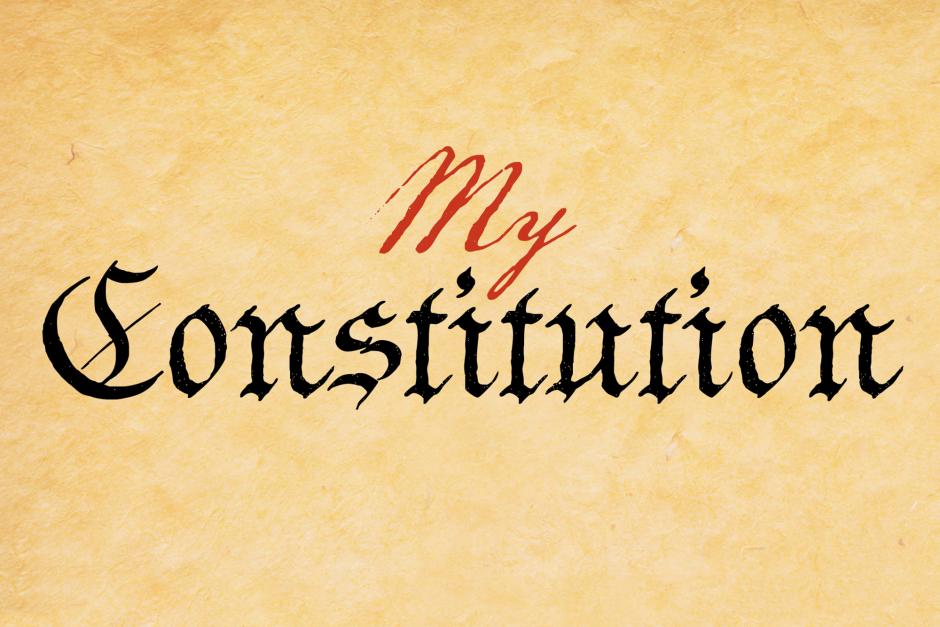 On the desk beside me is a booklet titled The Constitution of the United States, with an impressive picture of George Washington on its cover. In the forefront of the booklet are a number of quotations by Washington, an introduction to the booklet, and in the rear an index, a page with dates to remember from 1775 to 1791, and added quotes from Adams, Madison, Franklin, and Daniel Webster. It is published by the National Center for Constitutional Studies.

I value this booklet and the words it holds as my last line of defense against a government that can lose its moorings, or be infiltrated by those who do not revere its constitutional precepts and wish to bypass them for their own purposes. This possibility exists at the present time more blatantly than at any time in our recent history, and that has many Americans very concerned.

But is it possible they are being overly concerned? A quote from George Washington found in the booklet: “The power under the Constitution will always be in (with) the people. It is entrusted for certain defined purposes, and for a certain limited period, to representatives of their own choosing; and whenever it is executed contrary to their (the people’s) interest, or not agreeable to their wishes, their (the people’s) servants (politicians) can, and undoubtedly will, be recalled.”

It seems the first president believed that true power belonged to the people and not the politicians, and that the people had the right to “throw the bums out” when they felt it was necessary—which could be before their next election, which should make us wonder why this doesn’t happen more often. Nothing would better dispel the idea held by many of our elected officials in Washington that they are part of some divinely protected ruling class who always know what is best for us.

Too many times in recent history the American people have seen their cultural norms overthrown by courts that have decided that something is suddenly unconstitutional. Some years back high school football games in Texas were oftentimes preceded by a word of prayer over the public-address system. One man complained that this was a breach of the constitutional separation of church and state. The courts agreed. The prayers were stopped.

Can you read the FirstAmendment and see where this prohibits a brief prayer before a football game? No you cannot! Of course the question hinged on whether the prayer was government organized or required. Was it really! Remember the words of George Washington previously quoted: “The power under the Constitution will always be in (with) the people.”

Some evangelical clergymen are upset at the prospect of being unable to preach against the sin of homosexuality because of hate crime laws. Again, stop and think. Although the term “a wall of separation between church and state” cannot be specifically found in the Constitution, the basic idea is a good one and has served us well. Simply stated, all it means is that the church cannot get involved in affairs of state, and that the state cannot get involved in the affairs of the church. The two are separate.

If this is understood, then what are these clergymen worrying about? If a preacher (the church) cannot write legislation for the state, or a speech for the president on foreign affairs, then by what right can the state (politicians) write a sermon for the preacher? What he says from the pulpit of his church is his business, not theirs.

“Oh, but wait a minute. His sermon is demeaning and discriminatory against a certain group of people.”

Answer: “So what? The same would be true if he preached against robbing banks or swindling investors. Are you then telling me he can’t preach against stealing because it discriminates against thieves?”

Answer: “Hold it. When it comes to moral behavior I have my laws to guide me, and if there is a separation of church and state you have no right to nullify them. Plus, what I preach is also protected by my First Amendment rights.”

I could go on, but the point should be obvious. It would be unconstitutional for the state to prevent the church from preaching against the sin of homosexuality. Therefore the evangelical preachers, if they stand up for their rights instead of caving in, should have nothing to fear.

One last quote from George Washington, also found in the booklet: “Towards the preservation of your government, … it is requisite … that you resist with care the spirit of innovation upon its principles, however specious the pretexts. One method of assault may be to effect, in the forms of the Constitution, alterations which will impair the energy of the system, and thus undermine what cannot be directly overthrown.”

Isn’t it amazing that a warning of misguided activism can come from a Founder of our country over 200 years ago who had the prescience to understand what could take place in the minds of those not fully dedicated to the preservation of the Republic as it was originally founded? These individuals are the termites who, with little fanfare, eat at the vitals of our Constitutional Republic so they may, in the process, change the direction and meaning of the documents that keep and protect us, and the values we cherish.

If the government governs with the consent of the governed, then we would be fools to let anyone get away with messing with our Constitution for their own ends. Speak up loud and clear!

Editor’s note: There are important religious freedoms at play in some of these prayer cases (see the article by Hollyn Hollman in this issue). However, it is important to always reference the basis of any claim and keep true to the guarantee of individual rights and the sovereignty of the people enshrined in the Constitution.