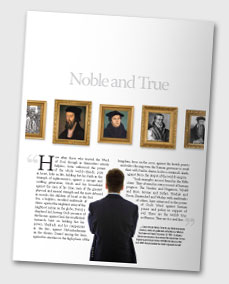 How often those who trusted the Word of God, though in themselves utterly helpless, have withstood the power of the whole world—Enoch, pure in heart, holy in life, holding fast his faith in the triumph of righteousness, against a corrupt and scoffing generation; Noah and his household against the men of his time, men of the greatest physical and mental strength and the most debased in morals; the children of Israel at the Red Sea, a helpless, terrified multitude of slaves, against the mightiest army of the mightiest nation on the globe; David, a shepherd lad, having God’s promise of the throne, against Saul, the established monarch, bent on holding fast his power; Shadrach and his companions in the fire, against Nebuchadnezzar on the throne; Daniel among the lions, against his enemies in the high places of the kingdom; Jesus on the cross, against the Jewish priests and rulers forcing even the Roman governor to work their will; Paul in chains, led to a criminal’s death, against Nero, the despot of the world’s empire.

Such examples are not found in the Bible alone. They abound in every record of human progress. The Vaudois and Hugenots, Wyclif and Huss, Jerome and Luther, Tyndale and Knox, Zinzendorf and Wesley, with multitudes of others, have witnessed to the power of God’s Word against human power and policy in support of evil. These are the world’s true noblemen. They are its royal line.

Comments written by Seventh-day Adventist pioneer, visionary, and much-published author Ellen G. White in the Review and Herald, December 24, 1908. A religious liberty consciousness characterized the church from its very beginning and was present in the Millerite revivals of the mid-1800s that preceded the church organization itself.