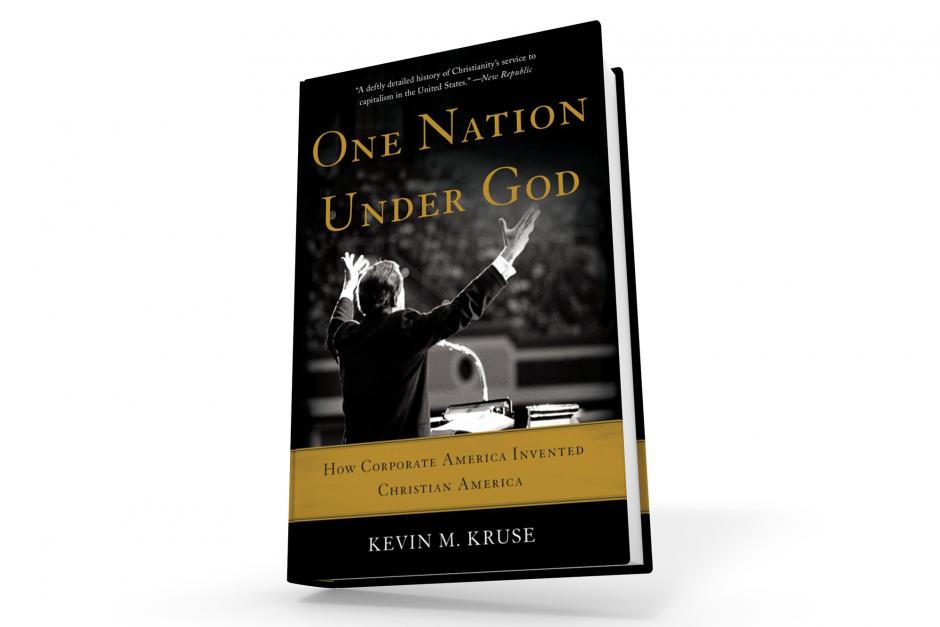 One Nation Under God?

Kevin M. Kruse is a professor of history at Princeton University. He specializes in the political, social, and urban/suburban history of twentieth-century America, with a particular interest in conflicts over race, rights and religion, and the making of modern conservatism. He is the author of White Flight: Atlanta and the Making of Modern Conservatism (2005), as well as coeditor of three collections: The New Suburban History (2006), with Thomas Sugrue; Spaces of the Modern City (2008), with Gyan Prakash; and Fog of War: The Second World War and the Civil Rights Movement (2012), with Stephen Tuck. His newest work is One Nation Under God: How Corporate America Invented Christian America (2015), a study of the rise of American religious nationalism in the mid-twentieth century.

Your latest book is titled One Nation Under God: How Corporate America Invented Christian America. Why do you believe this subject needed to be researched and published?

In truth, I didn’t set out to research this subject; I stumbled into it. My original plan was to study the grassroots origins of the Religious Right as local communities of religious conservatives across the country mobilized on such matters as school prayer and sexuality in the 1960s and 1970s. But when I dug into the archives on those topics, I was struck by how often ordinary Americans and political leaders alike invoked such phrases as “one nation under God” and “in God we trust” in making their arguments. Scholars and pundits have long dismissed such phrases as essentially meaningless—they were simply “ceremonial,” legal scholars and courts have long claimed—but in this research I discovered that they held incredible meaning for many Americans. That surprised me, so I decided to dig into it more.

Your research points to big business partnering with conservative Christian leaders, specifically pastors in the 1930s and 1940s, as a reaction to Roosevelt’s New Deal. How did big business benefit from its partnership with the church, and what was the benefit to the churches?

From the start of the New Deal, big business worked tirelessly to push back against the economic liberalism of the Roosevelt administration, pouring massive amounts of money into public relations campaigns that promoted unfettered free enterprise. Of course, most Americans believed that that was precisely what had brought about the Great Depression in the first place, so they weren’t inclined to listen to the self-serving arguments of businessmen. But once ministers—the most trusted members of society in the 1930s—started making the case for free enterprise, big business finally succeeded in advancing its arguments.

Individual churches and ministers who enlisted in this campaign to promote free enterprise benefited in a number of ways, but primarily it was in terms of financial support and notoriety. Several of them—James Fifield, Abraham Vereide, Norman Vincent Peale, and even Billy Graham in his early years—made their fame and fortune by promoting this argument for the powerful.

How does the Spiritual Mobilization of James Fifield differ from what Jerry Falwell did in the 1980s with the Moral Majority, and in what ways was it similar?

Both represent efforts to frame political conservatism in religious arguments, but the issues on which they were focused were quite different. Fifield and Spiritual Mobilization were concerned mainly with promoting a brand of economic conservatism that targeted government regulation of business in the New Deal state; Falwell and the Moral Majority were, in contrast, focused more on social conservatism that pushed back against the social liberalism of the Great Society era of the 1960s.

Are there movements afoot today that follow a similar pattern of big business partnering with churches to promote an opposition to what they believe as big government?

Nothing as dramatic as the story I tell in mid-twentieth century, though there are elements of it today. The Hobby Lobby decision, for instance, is essentially an extension of the claims that Christian libertarians made in the 1930s and 1940s—arguing that a corporation can not only have sincerely held religious beliefs, but that such beliefs should shield the business from the regulatory power of the government.

But Hobby Lobby might be the exception to the general trend. As we’ve seen in recent years, many big businesses have broken with the social conservatives of the Religious Right, especially when it comes to LGBT issues. Even Walmart, a company whose founders had long sought to put their own evangelical faith into practice, recently broke with the Religious Right, coming out against the religious liberty laws proposed in Arkansas in 2015.

You’ve traced the origins of the concept of America as a Christian nation back to the 1930s and 1940s, with its further development taking place during the Eisenhower administration in the 1950s. The latter time of this era coincides with the coming of age of the baby boomer generation, who’ve had the longest exposure to this idea. Are they the primary generation anchored to this belief, or is it cross-generational?

That’s a great question. I’d say it’s cross-generational. In fact, the baby boomers are in some ways a little resistant to the change, because many of them remember its implementation. When I give interviews and lectures on the book, I often hear from baby boomers who tell me, for instance, how they were in elementary school when “under God” was added to the Pledge of Allegiance in 1954 and how much trouble they had learning the new version, or how they remember their school’s changes on prayer or Bible reading in the early 1960s. So boomers often have a personal memory of how recent these changes were, and how controversial, too.

The generations that came after them, however, were raised in a nation that had already been changed, and they’ve taken that as a given.

You conclude that the belief that America is a Christian nation was initially promoted by Protestants in the 1940s and 1950s, a pre-Vatican II era in which Protestants and Catholics were worlds apart. However, there were individuals from these two camps who were able to find enough common ground to lobby and get legislation passed that became part of the foundation for this belief. What made that possible?

In many ways that tension between Protestants and Catholics helped propel this new politics of piety and patriotism. Earlier proponents of the idea that America was a “Christian nation”—and, to be sure, such arguments were made from the founding on—had generally framed such claims in an exclusively Protestant way.

But with the advent of World War II, that all changed. As the country prepared itself for the conflict, America’s leaders worried about the likely ethnic divisions in the population—Irish-Americans wouldn’t want to save England, or German-Americans wouldn’t wage war against the Nazis, etc. To paper over these ethnic tensions, wartime propaganda increasingly stressed the religious common ground that all Americans shared. Protestantism, Catholicism, and Judaism were bound together, in the language of the time, as the “three faiths of democracy.”

This belief that America had been founded on what proponents now began to call a “Judeo-Christian tradition” carried over into the postwar world. Protestants still worried about “the Roman menace” of Catholicism and stood on guard against any effort by Catholics to secure public money for parochial schools. (Notably, the leading organization concerned with religion in politics was then still called Protestants and Other Americans United for the Separation of Church and State.)

Catholics realized that joining this earlier Protestant crusade served as an easy way to prove their patriotism and piety, and thus worked hard to make these changes happen. The addition of “under God” to the Pledge of Allegiance, for instance, was promoted heavily by the Knights of Columbus, and the first bill to make the change was introduced by a Catholic congressman.

In reaction to the Supreme Court striking down prayer in public school in 1962, you write there was significant momentum in the 1960s to pass a constitutional prayer amendment, yet it failed. What do you think were the factors that led to its failure?

Originally the constitutional prayer amendment seemed a sure bet. In the wake of the Supreme Court’s rulings against state-mandated school prayer, the public was incredibly enthusiastic about amending the Constitution. By one estimate, more than half of all the mail sent to Congress during the 1963-1964 term was about school prayer, and the letters were overwhelmingly in favor of the amendment.

But to many people’s surprise, the leaders of major religious organizations—especially in the most prominent Protestant traditions—came out against the amendment during the congressional hearings. Though Congress had assumed clergy would all be in favor of the school prayer amendment, they lined up against it. Religious leaders resented what they saw as “government meddling” in religious affairs, rejecting the one-size-fits-all religion promoted by the state and resolving that individual churches, and not the public school system, should be the ones promoting religious education. Moreover, many worried that the school prayer amendment would effectively replace the First Amendment and with it the protections that churches had always enjoyed. “An American ideal would be shattered,” argued Theodore Carcich of the Seventh-day Adventists.

Your book dispels the idea that America is a Christian nation, but the claim of this idea is not new. For example, this concept was promoted in the 1880s when the Blair Sunday Law amendment was being pushed through Congress. Why does this belief keep flaring up every few generations?

There’s something of a cyclical nature to this, stretching back even before the nation’s founding to the first Great Awakening, if not before. In times of political chaos or social change, there have inevitably been calls for repentance and revival—not just for individuals or communities, but the entire nation as a whole. And just as inevitably, there’s usually an equal and opposite reaction to that action, and the spirit of revival fades—only for the cycle to pick back up once more.

While Christianity certainly had an impact on our nation’s history, the First Amendment very clearly outlines a separation of church and state to prevent religious favoritism, yet many Americans continue to embrace the idea of America being founded as a Christian nation. Why is that?

As I argue in the book, I think the changes made in the mid-twentieth century really helped popularize this idea and, more important, made it seem timeless. Ceremonies that were created in the 1950s, such as the National Prayer Breakfast, now seem like time-honored traditions. And religious phrases and mottoes that originated then are ubiquitous now. They’re in the Pledge of Allegiance our kids say each morning, they’re on the money in our wallets, they’re literally etched into the walls of Congress and the courts. Because they’re everywhere now, many Americans can’t imagine the country without them and assume they’ve always been here.

Tom Dombrowski, a minister of religion, writes from Coventry, Connecticut.