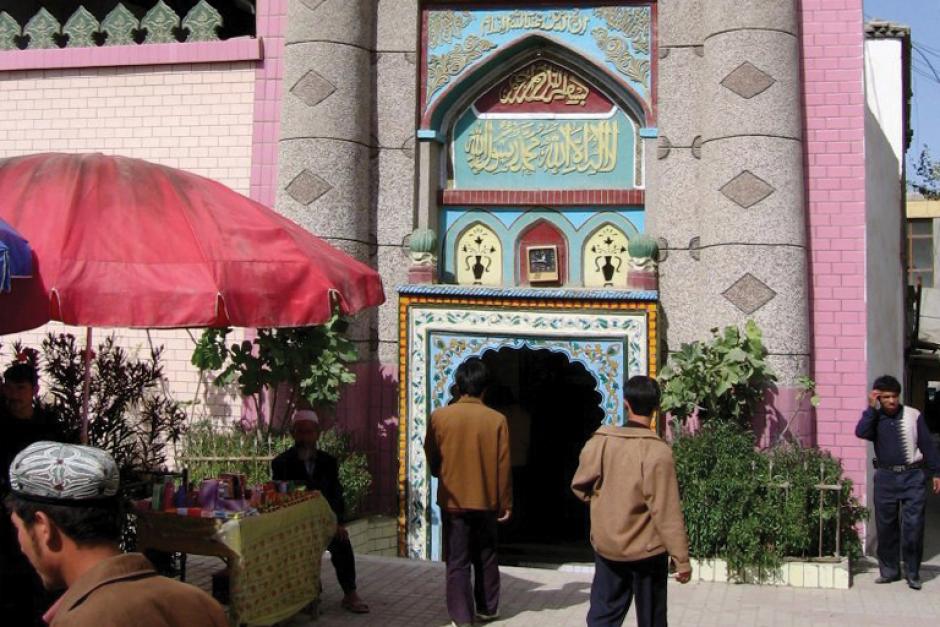 Oppression and Genocide in China

The outrage over Chinese action to reduce the freedoms of people in Hong Kong has overshadowed the genocide against the Uyghurs, who live in the Xinjiang territory, which inhabitants are apt to call East Turkestan. The causes of the repression may be traced back to incidents in 2009, such as riots in the capital, Ürümqi.

Rioting broke out during protests against the actions of the Chinese government in its promotion of in-migration of ethnic Chinese into the region, and its providing economic incentives to them that are unavailable to Uyghurs. There have been other acts of violence as well from time to time, and Uyghur guerrilla groups have staged some attacks.

While the effort at demographic alteration at the expense of the Uyghurs was not adequate to accomplish the aim of Uyghur assimilation, and has in fact caused pushback, China’s solution has been to intensify repression; hence the establishment of concentration camps. The government claims that the camps are educational facilities aimed at development of vocational skills and knowledge of Mandarin. However, Omerbek Ali, a former inmate, told a Canadian parliamentary subcommittee that many inmates are professionals and businesspeople; who are already well educated and not in need of vocational training. In his case he is also fluent in Mandarin and has worked as a translator.

It is widely estimated that there are at least 1 million Uyghurs, out of a population of 11 million, in the camps. University of Quebec at Montreal history professor Olga Alexeeva says that internment began in 2017. How does the Chinese government decide whom to incarcerate? The population is overwhelmingly Muslim, and identification with Islam seems to be a key factor. Growing beards, wearing a veil, attending prayers at the mosque, and referring to the Qur’an in letters are all factors. Of course, expression of “subversive” opinions will likely result in arrest, but simply acting as an observant and believing Muslim appears to be enough. China speaks of the problem of religious “extremists.” Outside the camps a massive surveillance system pervades life in Xinjiang.

Conditions in the camps are harsh. Education, vocational or otherwise, is nonexistent. Inmates are made to sing songs of praise to the Communist government. Physical abuse and torture are used. Another former inmate, Gulbahar Jelilova, told the same subcommittee that she was sexually abused by one of the camp operatives. As well, they demanded that she sign confessions, which she did not understand because they were in Chinese. One possible reason for her arrest is that she wears a hijab. In the camps women are forced to have birth control devices inserted. Children are taken from their parents.

Critics have often charged that some people who are arrested are executed in order to have their organs harvested. The charge is made with regard to Uyghurs and also to imprisoned followers of Falun Dong. In his testimony before the subcommittee, Ali recounted his experience in a camp. Some people were taken out and never returned. He himself underwent an examination of his liver, kidneys, and irises (for corneas). Reporter Ethan Gutmann did extensive interview research in China and came up with evidence that such harvesting has taken place in Xinjian. Fortunately, Ali eventually got out with these organs all still intact.

China is motivated in its repression by its aims at economic development; finding Uyghur sentiments as destabilizing. Xinjiang is rich in coal and natural gas and is part of the Silk Road development. University of Ottawa Errol Mendes advises putting pressure on private economic activity. He notes that France has a law requiring that companies attest that their merchandise is not produced in whole or part by forced labor. In China some products come out of concentration camps and others are produced by Uyghurs forced to move elsewhere in the country. Mendes noted that the French law imposes penalties on companies that are found to be implicated in use of forced labor. Thus, companies have an impetus to ensure that their goods are produced by free labor.

Mendes also calls for use of the Magnitsky Act on Chinese officials involved in human rights violations. The United States has used this law against some Chinese officials, and the list could be expanded. However, he would like to see a coordinated effort by a number of countries, listing the same offenders. Canada has such a law and such a list, but as of yet there are no Chinese on the Canadian list. The Magnitsky Act freezes property of the person in the country acting and refuses that person any entry visa. Even if the person does not have any property there, the listing is a way of shaming, especially if the action is taking jointly by a number of countries.

Besides the Uyghurs, Falun Gong practitioners are also targeted by the Chinese government. Falun Gong is a movement in which participants engage in meditation, various exercises, and regulated breathing. The movement embodies a moral philosophy largely of Buddhist character, with Taoist elements.

When Falun Gong began in 1992, it was in China’s good books, seen as promoting health and Chinese culture and improving morality. However, in 1995 founder Li Hongzhi refused to formalize ties to the Communist Party. That was the end of the romance. The Chinese government is uneasy with any movement of which it is not in control. In 1999 thousands of Falun Gong leaders were arrested, and the movement was outlawed.

Falun Gong may or may not be a religion, depending on how one looks at it. It has no clergy, no religious holidays, and does not meet in religious facilities to celebrate faith, but it does have a moral philosophy based largely on Buddhism. In 2001 Falun Gong was given the International Freedom Award by Freedom House, an American nongovernmental organization dedicated to advocacy and research on freedom and human rights.

To an outsider, the Chinese government repression makes no sense. It has turned a quiet exercise movement into a bitter opponent on an international level. At present, the movement produces the Epoch Times newspaper outside China, a publication with a right-wing orientation. The movement also has radio and television outlets in the West. China’s repression of the movement has involved a massive campaign of coercion involving physical punishment and torture, sexual abuse, firing from employment, and expulsion from school. Former Canadian member of Parliament and lawyer David Matas conducted research resulting in the conclusion that organ harvesting has also taken place with Falun Gong victims. As in Ali’s case, Falun Gong prisoners were examined to determine if their organs would be suitable for transplant. The principle is clear: If you are not fully within the system, you are the enemy.

Canada has citizens who are imprisoned in China: some for criminal activities and others for ideological and political reasons. Two criminals have been convicted of drug offenses and are currently under death sentence. “Currently” might be an appropriate qualifier, because this sentence was imposed following conflict between China and Canada over the case of Meng Wanzhu.

Meng, chief financial officer of Huawei, a major Chinese corporation which is an international competitor for 5G Internet placements, had been charged by the United States with fraud and trade with Iran in violation of the American embargo. Her plane stopped in Vancouver, where she was to take a connecting flight to Mexico. Meng was then arrested by Canadian border agents because of an American request for her extradition.

Meng is currently under a very mild form of house arrest in Vancouver, fighting what is likely to be a long court battle to avoid being extradited to the United States. She is well connected in China, and that country has reacted vigorously, in both economic and juridical ways. China is a major market for Canadian agricultural products, especially canola, wheat, and pork. Canola shipments have been rejected as being contaminated, but the contamination is political rather than organic. There have also been problems with sales of pork and wheat.

On the juridical end, China has jailed three Canadians in retaliation. Michael Spavor is a businessman who has dealt extensively with North Korea. Michael Kovrig is a former Canadian diplomat who is currently with the International Crisis Group, which works to defuse international tensions. Speaking of irony! China has also jailed and tried Sun Qian, who was sentenced to eight years in prison for her affiliation with Falun Gong.

Huseyin Celil is the other Canadian. He fled China, where he was a defender of Uyghur human rights. In 2006 he and his family were visiting in-laws in Uzbekistan when that government responded to a request to arrest him and extradite him to China. He has been held in China ever since. Celil is Canada’s special Uyghur victim. China even refuses consular visits.

At this point, Canada’s approach has been to call on other governments to put pressure on China to release the Canadians not convicted of drug offenses. Canada is also calling on China not to execute the offenders. The fact that Celil has been in custody for 14 years demonstrates might illustrate the mixed value of this approach. Sun is looking forward to eight years, and the two Michaels are facing two years shortly. It is likely that they will be imprisoned for as long as Meng’s sentence might be if she ends up in U.S. custody and is found guilty there.

There is another approach possible. Canada could engage China in a cold war-type swap—Meng for Kovrig, Spavor, Sun, and Celil and reduction of the death sentences. It is very likely that China would agree to such a deal because of Meng’s importance to the powers that be in China. Moral suasion does not seem to work with the men in charge in Beijing.

It might be objected that Canada has duties to the United States that prevent Canada from flouting the American demand. However, as John Bolton reported in his recent tell-all book about the Donald Trump administration, The Room Where It Happened, Trump directly offered Chinese president Xi Jinping to drop the case against Meng in exchange for trade concessions. Hence, the United States would have little legitimate argument against such a prisoner exchange between Canada and China.

Under Conservative prime minister Brian Mulroney, Canada took a leadership role in the international struggle against apartheid. Once such a swap settles the situation with the Canadian captives in China, Canada should then take an international leadership role in the struggle against the genocide against the Uyghurs and the discrimination and brutalization of Falun Dong. As Professor Mendes proposed, such a course is most effective when in coordination with other countries.

In the meantime, there are other tools that Canada can take on the economic front, such as a complaint to the World Trade Organization over the canola matter. A WTO ruling against China would give Canada the occasion to impose punitive tariffs.