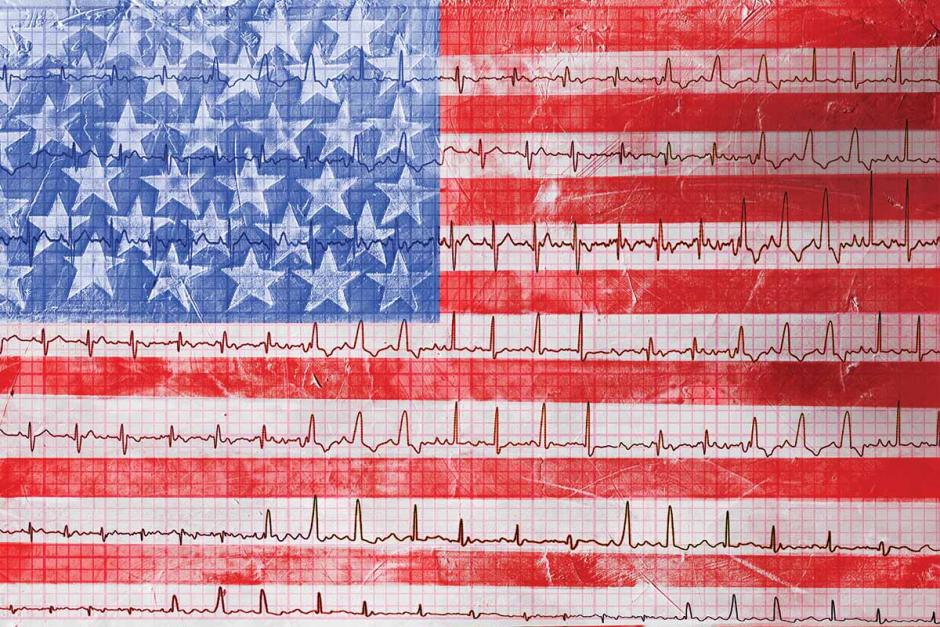 Love of country or harmful nationalism? National pride or idolatry?

Amid all the political acrimony of recent years, no concept has been the target of more debate and fury than “Christian nationalism.”

A steady stream of books and articles have blamed Christian nationalists for all manner of ills in America, ills that culminated in the January 6, 2021, attack on the U.S. Capitol by supporters of then-President Trump. Some of the rioters were conspicuously carrying Bibles or Christian-themed signs. But for observers troubled by the Christian nationalist phenomenon, there remains an inescapable truth: all people, including Christians, live in nations. Humans have occasionally created transnational or supra­national entities, too, such as empires, or the European Union, or the United Nations. But for everyday people around the world, living in a nation is the default mode of political existence. This doesn’t necessarily mean that a nation composed mostly of Christians is a “Christian nation,” but it does mean that Christians have no option but to reckon with their national identity. At least in a geographic sense, we’re all nationalists.

If national identity is inescapable, what does healthy Christian nationalism or patriotism entail? This is not the place to unpack an entire theology of nationalism. But the Bible assumes that nations exist and that God granted people national identities after sin entered the world. If Adam and Eve had not sinned, they and their children would presumably have lived in a God-ruled earthly kingdom, not in particular nations. But in Genesis 10 we see the peoples of the earth dividing into “nations” after Noah’s flood. In Genesis 11 God “confounded” people’s languages as a response to their prideful sin in building the Tower of Babel. Divided languages further differentiated the nations of the earth, as a common language is a typical feature of a nation. (The French speak French, the English speak English, and so on.) Biblically, nations are the result of human sin, but they are also part of God’s common grace to all humans. Nations, and the governments that rule over them, are God’s gifts to rebellious humans who have made a mess of God’s creation. Nations are contingent creations, but given their divine origins, they can be good things.

Nations are not inherently bad, yet they are a divine accommodation to human frailty. This tension provides a helpful perspective on a Christian view of a nation. Nations can aid human flourishing if they embrace the common good and do not become objects of undue reverence. America’s tradition of religious liberty, for example, suggests a way that healthy nationalism or patriotism works. Americans are rightly proud of their heritage of religious liberty, as exemplified in the First Amendment. But we should remember that in our imperfect national history, religious freedom has often been denied and/or contested. Religious liberty must serve the common good of all faiths and people of no faith, or it is not real freedom. For Christians and people of other faiths, the ultimate purpose of religious liberty is to worship God (or not) in spirit and truth. Doing this transcends the ephemeral priorities of a nation. A proper view of religious liberty reminds us that our commitment to God far exceeds our commitment to the nation.

Religious nationalism goes wrong when one’s religion and spiritual allegiance becomes inextricably tied to the nation. In other words, we err when we conflate the kingdom of God with a transitory nation. In our frailty and shortsightedness, however, this is a tempting thing to do. We see the trappings of the temporal nation all around us, and it is easy to forget that our ultimate citizenship is in heaven (Philippians 3:20). Citizens of any nation could potentially fall into undue or idolatrous forms of nationalism. But undue nationalism is a special temptation for citizens of powerful nations. Since World War II, America has been the most powerful nation on earth. We should not be surprised that some American citizens’ patriotism has at times turned into a wrongheaded form of Christian, or at least religious, nationalism.

The temptations of Christian nationalism are most acute in times of war. Indeed, war is the great historic engine of civil religion, or the blending of devotion to God and the state. War demands national unity. The immense sacrifices of war, especially the deaths of soldiers, sometimes turn citizens’ thoughts to reverential thoughts about the nation itself. America has obviously had its share of wars. The nation was born in war (the American Revolution), it had a “new birth of freedom” in the Civil War, and it has spent the past two decades engaged in the amorphous but costly “war on terror,” galvanized by the terrorist attacks of September 11, 2001. Other countries have also embraced versions of Christian nationalism, especially Protestant or Catholic countries that once possessed far-reaching empires, such as Spain or Britain. From the time of Columbus’s explorations in the New World in 1492, a number of European nations saw their empire’s growth and victories in war as a fulfillment of God’s purposes in the world. Colonists in America had a deep providential attachment to the British nation in the early 1700s, before they ever conceived of America as a separate, non-British “nation.”

When America improbably won its war against the powerful British military and secured independence as a nation in the Treaty of Paris in 1783, even the more skeptically minded Founders turned to providential rhetoric to explain what was happening. Many recalled the prophetic questions in Isaiah 66:8: “Who hath heard such a thing? who hath seen such things? Shall the earth be made to bring forth in one day? or shall a nation be born at once?” Yes, it seemed that a new nation had been “born at once,” according to God’s plan. Advocating for the new Constitution in The Federalist, the normally reticent James Madison stated baldly that it was impossible “for the man of pious reflection not to perceive in [the founding] a finger of that Almighty Hand which has been so frequently and signally extended to our relief in the critical stages of the revolution.”1 For traditional Christians, there could be no question whether God had sovereignly permitted the creation of the American nation. But did this new nation somehow play a special role in God’s plans for humanity, the way that biblical Israel once had? The answer to this question was less clear.

From the American Revolution forward, war and other national trials have always drawn out discussions regarding God’s plans for America, and America’s allegedly redemptive role in the world. Even lesser-known conflicts such as the Mexican War of the 1840s raised such questions. It was the looming U.S. war with Mexico that prompted the New York journalist John O’Sullivan in 1845 to coin the phrase “manifest destiny,”2 referring to the idea that God planned for Americans to “overspread the continent allotted by Providence for the free development of our yearly multiplying millions.” O’Sullivan was speaking specifically about the annexation of Texas, much of which had been part of northern Mexico as of the mid-1830s. Critics of the Mexican War saw it as craven territorial aggression in order to expand the “Cotton Kingdom” of Southern slave masters. But defenders of the war typically saw it as an unfolding of the providential plan of God for the nation and for North America. Such beliefs have always made the nation more willing to sacrifice lives and treasure in times of war and have added to the sacred aura of the nation itself.

This interpretation may sound cynical, and certain politicians have always been willing to exploit Christian nationalist rhetoric for political advantage. But there are also times in which religious nationalist language truly has been unifying, and it has seemed entirely appropriate to the needs of the national moment. One such moment was the civil religious rhetoric during World War II, rhetoric that crested in 1944 during the D-Day invasion. Christian pacifists, of course, would view no war as a good thing. But few would disagree about the abominable nature of the Nazi regime that the Allies defeated in World War II. Again, American and Allied leaders framed the invasion of Europe in 1944 as a cause blessed by God. General Dwight Eisenhower told the Allied Expeditionary Force on D-Day that they were about “to embark upon the Great Crusade, toward which we have striven these many months.” Echoing John Winthrop’s “Model of Christian Charity” oration to Massachusetts colonists in 1630, and Christ’s words in the Gospels about the city on a hill, Eisenhower assured the troops that “the eyes of the world are upon you. The hopes and prayers of liberty-loving people everywhere march with you. . . . Let us all beseech the blessing of Almighty God upon this great and noble undertaking.”3 These were civil religious sentiments that united a wide range of Americans to support—and pray for—the Allied campaign to liberate Europe from Nazi tyranny

Most causes do not feature such moral clarity as the campaign to defeat the Nazis. Were the American wars in Vietnam, or in Iraq in 2003, morally justified? Historians and theologians will continue to debate such matters, but the use of Christian or religious nationalist rhetoric during these wars could not paper over the serious political and ethical dilemmas raised by the wars themselves. Who could forget George W. Bush’s assurances to the nation in his address to Congress after the September 11 attacks? “Freedom and fear, justice and cruelty, have always been at war, and we know that God is not neutral between them,” Bush declared. “We’ll meet violence with patient justice—assured of the rightness of our cause, and confident of the victories to come. In all that lies before us, may God grant us wisdom, and may He watch over the United States of America.”4 Few grieving Americans, including me, objected in that moment to Bush’s nationalist sentiments. Yet after enduring two decades of wars with highly equivocal outcomes—including the war in Afghanistan, which had provided a haven for Al-Qaeda and Osama bin Laden—Bush’s confidence about God’s intentions and plans seems more questionable.

In light of this history, Christians must find a wise balance in their view of the nation. First, we do in fact live in nations. Even Christian groups such as the Amish, who largely avoid entanglement with the nation, are profoundly shaped by their withdrawal from its affairs. Reckoning with our national identity is an experience common to humankind. Second, it is fitting for Christians to appreciate and express gratitude for good things in their nation’s tradition. American Christians can readily admire aspects of their national history, such as our heritage of religious liberty, and our founding doctrine of all people’s equality before God. But we should not causally assume that God has a unique providential role for America above all other nations of the earth. Our nation may be powerful, and we may love it, but that does not necessarily mean it is God’s redemptive vessel in providential history.

1 James Madison, “Concerning the Difficulties of the Convention in Devising a Proper Form of Government,” Daily Advertiser, January 11, 1788, retrieved May 5, 2022, from The Avalon Project, The Federalist Papers, No. 37, https://bit.ly/3kJ1bnu.

Thomas S. Kidd is a research professor of church history at Midwestern Baptist Theological Seminary in Kansas City. He has authored numerous books, including Who Is an Evangelical? The History of a Movement in Crisis (Yale University Press, 2019) and Benjamin Franklin: The Religious Life of a Founding Father (Yale University Press, 2017). His most recent book, Thomas Jefferson: A Biography of Spirit and Flesh, was published this year by Yale University Press. His work has also been published in various media outlets, including the Washington Post and the Wall Street Journal, and he blogs at “Evangelical History” at The Gospel Coalition website. He’s on Twitter, ﻿@thomasskidd.