Patriotism, Piety And The Perfect Storm 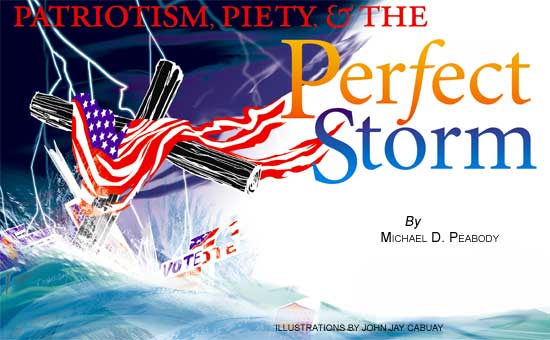 Smart advertisers understand the value of tapping into the celebrity of famous sports and entertainment figures in order to build instant credibility and brand recognition. Athletic gear manufacturer Nike would slip off the radar screen without the purchased endorsement of legendary athletes like Michael Jordan, whose shoes made him fly. Would-be members of Congress solicit the personal endorsement of former presidents and mayors of large cities, and governors seek celebrities who can breathe fresh air into stale initiatives.

But as credible and well-spoken as celebrities can be, there is always the risk that a celebrity will make a mistake that can sink a political career. In spite of what publicists would have you believe, celebrities are human after all and they live under the microscope of a curious society that salivates for the latest scandal.

Given these high stakes, what is a politician to do? He or she can roll the dice with a famous personality, or in the alternative, can take a well-calculated, low-risk leap of faith and claim the endorsement of God, who by most accounts has a spotless record. 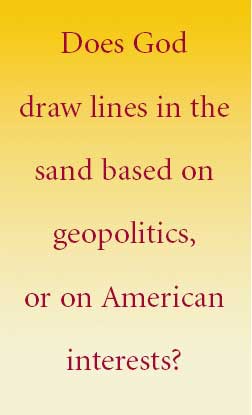 Of course, this changes the rules of the game dramatically. If God is endorsing candidate A, He is certainly not endorsing candidate B. The endorsee is lifted on angels' wings while the opponent is instantly demonized as conscientious voters are reminded of the eternal consequences of knowingly making the wrong decision. Thus, candidate A can march to victory, pausing only to adjust his halo, while candidate B expends his resources trying to pull himself out of the very public pits of campaign hell.

Christianity is America's most popular religion, which one can join at some level through mere intellectual assent, so the tactic of invoking this faith can be used effectively by those who have not otherwise set foot in a church for twenty years. Yet rapid conversions and enhanced piety magically appear the weekend before an election when media cameras capture candidates dressed in their Sunday best, replete with spotless families and large Bibles as they greet the minister at the door.

In the game of modern politics, laying claim to God's endorsement, and backing this up with a rally to righteousness, is the rhetorical equivalent of simply pulling out a gun and shooting the opponent. By and large, this is a first come, first served proposition as the first one to lay claim to God becomes the new king of the hill. This fact is not lost on the current presidential contenders from both major parties who are scrambling to be the first to lay solid claim to God's blessing as they approach the 2008 election.

Aside from potential future retribution for misusing God's name, there are few earthly drawbacks to claiming to have "God's seal of approval." It costs nothing more than a few carefully chosen words to establish credentials as being God's favorite, and it presents a nearly irrefutable argument.

In a larger sense, this largely ceremonial, flag-waving faith has come to exemplify a marginal civic religion that dons the outer garb of piety to cloak policies that might contravene actual Christian values. In some circles, primarily inhabited by the disaffected who question the incompatibility of the outer piety and inner apostasy, this is known as hypocrisy. In others, the resulting cognitive dissonance has drastically negative results. 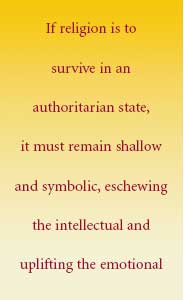 A while back, a friend who leans heavily to the right asked me whether I thought God supported the United States in the War on Terror. Knowing the nature of the question, I sensed that I was walking into a shabbily constructed minefield, so I decided to up the ante with a few questions of my own. Can a Christian feel patriotic toward his native Iraq or toward her North Korean homeland? Does God draw lines in the sand based on geopolitics, or on American interests? Bottom line, would God drive a Chevy or a Hyundai?

This is not to say that love of country is misguided. I love my country and its people. During the Olympics, I hope that my country's team will win all the gold medals, and my heart swells with pride when I hear our national anthem. When I vote, I make the best decision I can, but that does not mean that an all-knowing God would agree with my vote, which is certainly not infallible. Invoking the name of God in order to support my predetermined goals is not sufficient to secure His blessing.

Speaking in the midst of a devastated economy, linked by many to a lack of national pride and moral resolve, Adolf Hitler struck a chord when he invoked God's name and called the audience to reflect upon their spiritual duty. "I am convinced that men who are created by God should live in accordance with the will of the Almighty. . . . Thus it is that we. . . , too, have in the depths of our hearts our faith. We cannot do otherwise; no man can fashion world history or the history of peoples unless upon his purpose and his powers there rests the blessings of this Providence."

Looking back at that day in June 1937, it was certainly the right time to call upon God. At that time few Germans supposed that the charismatic man who stood before them, uttering phrases that sung praises to their sense of religious and national pride, would unleash and justify their most evil impulses. Hitler had wrapped himself in the nation's flag and spoken to their Christianity, and though he may not have followed that faith himself, it was a tool he used to persuade and launch his nation on a hellish path.

Throughout history, invoking the name of God to endorse evil policies has succeeded as ruthless dictators have learned to embrace the outer semblances of faith. After all, what harm could such a great Christian do?

As they speak inspiring words of faith, dictators foster an environment that so associates them with the faith of the nation that they are soon seen as religious leaders. Through pithy religious phrases, they appeal to those whose faith is blind to theological realities and who have unquestioning loyalty. Although an intelligent underground might oppose them, they can count on idealistic nationalists and pietistic religionists to crush this opposition at the core, and appeal to the unbridled passions of anti-intellectualism and populism and artfully claim that they govern by "gut feelings."

Nationalism that rejects questioning and a shallow religion can fuse and inevitably lead a nation to disaster. After it is all over, those who manage to survive will take years to figure out why otherwise peaceful people could feel justified in doing such evil things. Even then, only a few will grasp the truth that the moribund beast arose from the blind, rapid merger of religion and nationalism.

It is easy to think that the real threat to freedom can come from religious nationalism's counterpart of atheistic socialism. But the machine of atheism is much harder to maintain and will eventually run out of energy. This is because, however small it is, religion is a central component to the thought patterns of most people. People have an innate hunger for some kind of faith, and draconian methods validate the very faith they are intended to crush.

I have long felt that one of the main reasons that so many communist nations failed was because they early on targeted the faith of the religious. Had they embraced the outward signs of the faith and gradually, imperceptibly, morphed it to their ends, they could have gained the support of the large number of marginal believers who would have begun to see the work of the politburo as consistent with that of God. Only the intellectually vigorous would remain in opposition, and they could easily be disposed of openly and with the blessing of the majority who would view them as criminals.

Instead, through persecution, communist dictators created a religious vacuum which ultimately became a fatal flaw. Despite its storied attempts to foist atheistic patriotism on the people, the Soviet Union was unable to sustain itself, and its residents clamored for the exit when the Iron Curtain fell. Had the U.S.S.R. wrapped the same authoritarian aims in the gradually modified religion of Mother Russia, it might have lasted. But in the absence of a faith, the secular state was doomed.

In contrast, those nations that have embraced the symbols of religion, carefully choosing only those elements that support their aims, opportunistic thugs become saints, and those who question them are viewed by the majority as both unpatriotic and unholy. Kamikaze pilots turn their planes into guided missiles at the bequest of a divine emperor, and terrorists are convinced to detonate themselves in the name of Allah.

The unholy alliance of nationalism and religion is so powerful that those whose dual passions have merged can outlast economic deprivation, military defeats, and untold hardship until their bleeding hands scratch at the threshold of death.

For authoritarian dictators, of course, the downside to all this talk of religion is the fact that thoughtful faith can lead to introspection and a longing for moral clarity rather than simplistic flag waving and misguided populist instinct. If religion is to survive in an authoritarian state, it must remain shallow and symbolic, eschewing the intellectual and uplifting the emotional. A would-be dictator finds his greatest strength in associating unquestioning faith with clueless obedience to fabled patriotic prerogative.

Americans may not be facing immediate threats from kamikaze pilots, or even suicidal bombers for that matter, but couple the current escalating trends of natural disasters, popping sounds from economic bubbles, and fears of terrorism with the claimed divine endorsement of nationalistic religion that is long on emotion but intellectually weak and a perfect storm awaits offshore. This deadly combination of urgent nationalism and claimed godly endorsement has illuminated the destructive course of nations throughout history, and there is a dull arrogance in suggesting that we would respond otherwise.

Michael D. Peabody is a Seventh-day Adventist attorney who serves as a government liaison representative in Sacramento, California.