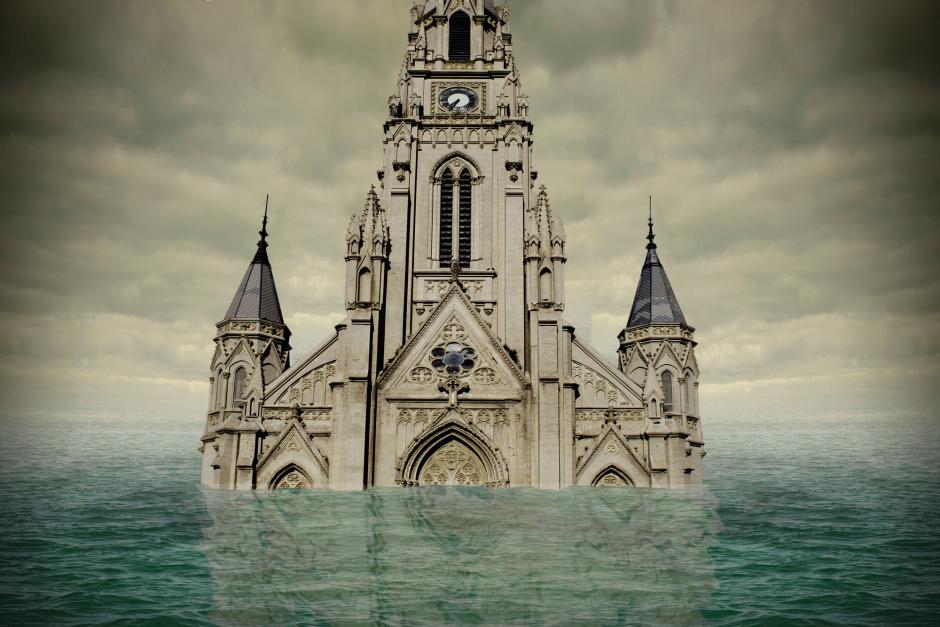 Paying for Acts of God - FEMA Funds for Houses of Worship

When Hurricane Sandy struck the East Coast last October, it did some damage to the Reverend Mark Lukens’ Bethany Congregational Church in East Rockaway, New York. Many property owners in the area need some assistance to rebuild. That doesn’t mean, however, that Lukens is expecting a government handout for his church.

A New York Times report estimated that the storm did more than $80 billion in damage to the states of New York and New Jersey. Included in that figure is damage to an unknown number of houses of worship, some of which say they can’t afford to make repairs on their own.

As a result, many of these religious organizations are seeking assistance from the Federal Emergency Management Agency (FEMA) to rebuild, even though traditionally houses of worship have not been eligible for federal taxpayer subsidies.

The reason for this is simple: The church-state separation safeguards in the U.S. Constitution bar public funding of religion. But that hasn’t stopped some religious lobbies from pushing a bill through the U.S. House of Representatives that would give direct taxpayer aid to houses of worship.

At first glance, it would seem that those who want to rebuild religious sanctuaries with taxpayer dollars face long odds of success. In August 2005 many religious buildings near the Gulf Coast were damaged by Hurricane Katrina, which remains the costliest natural disaster in U.S. history. In the aftermath of that storm the George W. Bush administration declined on constitutional grounds to allocate federal money to rebuild religious structures. It was a somewhat surprising move, given that Bush was an outspoken Religious Right ally and championed “faith-based” funding.

The situation is different this time. In the wake of Hurricane Sandy, U.S. Representative Christopher H. Smith (R-N.J.) introduced H.R. 592. The Federal Disaster As­sistance Nonprofit Fairness Act makes churches, synagogues, mos­ques, and other houses of worship eligible for FEMA grants “without regard to the religious character of the facility or the primary religious use of the facility.”

Learning of this constitutionally problematic proposal in February, Maggie Garrett, legislative director for Americans United for the Separation of Church and State, advised all members of the House of Representatives to vote against the measure. Garrett, who was born and raised on the Jersey shore and whose parents’ home was damaged by Sandy, had just a few days to try to convince lawmakers to reject the bill because it was rushed to the floor without the usual round of hearings.

In a February 12 letter to lawmakers Garrett wrote, “Although it may not seem easy in times of tragedy to tell those seeking aid that they are ineligible for government grants, the bar on the government rebuilding of houses of worship is an important limitation that exists to protect religious freedom for all. It upholds the fundamental principle that no taxpayer should be forced to fund a religion with whom he or she disagrees and that the government should never support building religious sanctuaries.”

Despite that warning, the bill pas­sed 354-72 on February 13. Critics, including Americans United, noted the spread of a great deal of misinformation before the vote, such as claims that current disaster relief regulations discriminate against houses of worship purely because they are religious.

In fact, Garrett said that current law allows disaster aid to all nonprofits, including religious entities, if they provide “essential services of a governmental nature to the general public.” Religiously affiliated homeless shelters, senior citizen centers, and rehab facilities are eligible for assistance, but houses of worship themselves are not.

Purely religious institutions are expected to turn to congregants to pay for reconstruction and repairs or rely on private insurance. Some may also be eligible for low-interest loans from the Small Business Administration.

The Obama administration did not take a formal position on H.R. 592, but a FEMA statement on it warned that the measure is likely to result in church-state lawsuits. Passage would require the agency to fund repairs of sanctuaries and altars, the statement said, and decide whether to pay for damaged religious art, icons, prayer books, Torah arks, and stained-glass windows.

At a time when Congress is supposedly looking for ways to cut the budget deficit, FEMA said the bill would add at least $75 million in new federal expenditures for houses of worship even in “noncatastrophic” years.

Nadler was critical of the way the bill was pushed through hurriedly, bypassing the committee hearing process. “This bill should be subject to hearings in the Judiciary Committee, with input from constitutional scholars, and due consideration of these significant constitutional issues, before we take such a radical step,” he said.

As for the proposal itself, Nadler said it raised serious church-state concerns.

“Direct government funding of churches, synagogues, and mosques has always been held to be unconstitutional,” he said, “and the decisions of the Supreme Court establishing that principle remain good law to this day.”

Scott expressed a similar sentiment during floor remarks. “While the devastation caused to many communities after Hurricane Sandy is severe, and while I empathize with the desire to assist all who have suffered severe losses, direct government funding to houses of worship, whether for building or rebuilding, remains unconstitutional,” asserted Scott.

Amash’s stance was a bit of a surprise, given his ties to the Tea Party. But he was staunchly against the measure, stating on his Facebook page that the bill “skews the law away from fairness” by making religious buildings automatically eligible for reconstruction aid when other entities aren’t. “Houses of worship,” he said, “aren’t ‘of a governmental nature.’ To suggest that they are challenges the independence of these institutions, undermines First Amendment protections, and threatens religious liberty.”

In addition to the strong overall backing H.R. 592 received from the House, it was also supported by a range of religious lobbies, including the U.S. Conference of Catholic Bishops, the Union of Orthodox Jewish Con­gre­gations of America, and the Am­erican Jewish Committee, among others.

Nathan Diament, executive director of public policy for the Orthodox Union’s Institute for Public Affairs, has been especially vocal. National Public Radio reported that Diament has spoken with the Obama administration to push for a change in FEMA rules, and he charged that Americans United and its allies are out of step with current interpretations of the First Amendment.

A press statement from Americans United stated that a “fundamental rule of American life is that congregants, not the taxpayers, pay for the construction and repair of houses of worship. We must not let a storm sweep away the wall of separation between church and state.”

If aid proponents get their way, critics say, a precedent would be set for government funding of all sorts of religious groups, including those that preach hate. Some have noted that the House bill’s terms would open the door to public aid to such congregations as the Reverend Fred Phelps’ Westboro Bap­tist Church.

“The Westboro Baptists disrupt military funerals with homophobic slurs,” said Alfred Doblin, an editorial writer with the North Jersey Record. “I do not want my tax dollars to rebuild their Kansas-based church if a tornado blows it away. Nor would I want tax dollars to replace the sanctuary of some Florida preacher who wants to burn Qurans. These religious spaces are wombs where hate-driven ideologies are given life.” Some might dismiss this as obscuring the issue, sure that such groups would not receive the subsidy. But if that were the case, then government would be stating its religious preferences and that is also a dangerous direction to take.

H.R. 592 faces an unclear future in the U.S. Senate. Senator Kirsten Gillibrand (D-N.Y.) came out in support of the measure, but it is not known just how many senators share her views. The Becket Fund for Religious Liberty said thus far senators have not been receptive to moving the bill. Daniel Blomberg, legal counsel for the Becket Fund, which offered a constitutional analysis of H.R. 592 for Congress, told Breitbart News that several members of the House have reached out to the Senate, but as of late March had not received a response.

The bill’s future is murky because of the sensitivity of the issue. Diament said more than 200 churches and synagogues in New York alone have already applied for FEMA grants.

Americans United was joined in opposing the bill by the American Civil Liberties Union, the Religious Action Center of Reform Judaism, the Interfaith Alliance, the Secular Coalition for America, and the Baptist Joint Com­mittee for Religious Liberty (BJC).

“Theological and constitutional principles ensuring religious liberty must apply and be followed in the hard cases as well as the easy cases,” said the Reverend Brent Walker, BJC executive director. “We enjoy unprecedented religious liberty in this country precisely because, over the past 222 years, we have stuck to our principles of voluntary, self-sufficient religion and disallowed governmental help or harm, even in the tough cases.”

The New York Times is also on the side of church-state separation. In a March 5 editorial the newspaper observed, “Supreme Court rulings interpreting the First Amendment’s prohibition against establishment of rel­i­gion have long barred the direct use of tax money to build, repair, or maintain buildings devoted to religious services or other religious activities. . . . The First Amendment does not allow a Hurricane Sandy exception to pay for the rebuilding of damaged houses of worship.”

At least one group, it seems, simply found the situation too difficult to oppose. The Anti- De­famation League withdrew its opposition to H.R. 592 in February, although it does continue to oppose government funding of religion in general.

“This position does not represent any lessening of ADL’s concerns regarding the risk to religious liberty posed when government funds transmitted to religious institutions directly advance the religious mission of those institutions,” the organization said in a statement to the media. “We continue to believe as a matter of principle that keeping government out of religion is the best way to safeguard religious freedom.”

Americans United Garrett said she understands why some would be reluctant to speak out against FEMA funding for houses of worship, but even in the face of trag­edies, the Constitution cannot be ignored.

“This is a challenging time and a challenging issue,” Garrett said. “I feel for everyone who suffered losses from the storm. But I also know that we must resist the temptation to use a disaster—even one of this magnitude—as an excuse to violate core constitutional values.”

Simon Brown is on the editorial staff of Church and State. He writes from Washington, D.C.