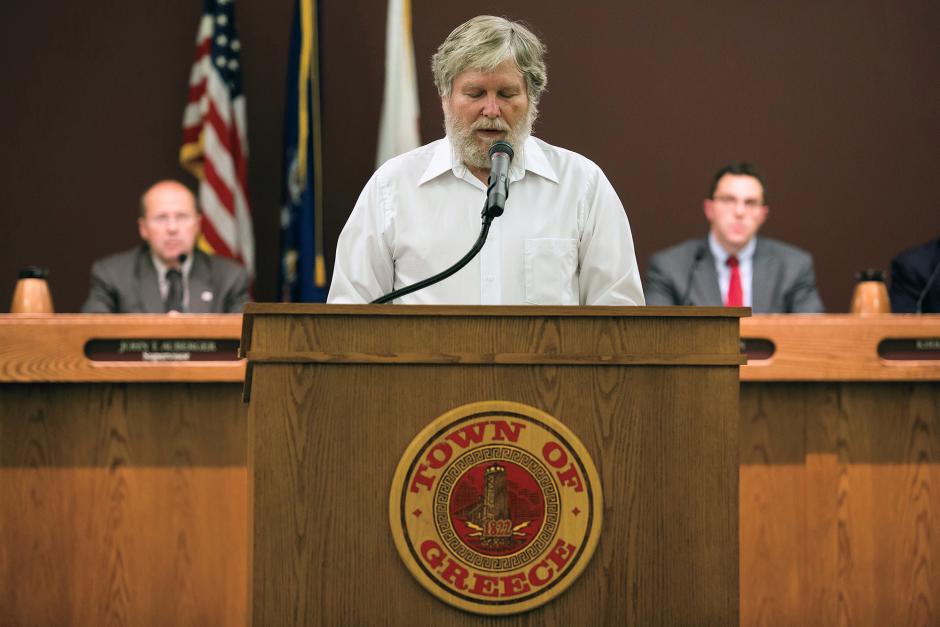 Despite the First Amendment’s ban on government establishments of religion, opening government meetings with prayer is a longstanding tradition in many American communities. Indeed, in Marsh v. Chambers (1983) the U.S. Supreme Court upheld chaplain-led prayers before the Nebraska state legislature after a Nebraska lawmaker challenged the prayers as an unconstitutional advancement of religion. The Court held that the prayers were “simply a tolerable acknowledgement of beliefs widely held” and comparable to the U.S. Congress’s prayer practice, which dates to the Founding era. Since Marsh, legislative prayer, at least at the state and national level, has been a largely accepted, but little understood anomaly in religious liberty law.

Generally, the First Amendment protects religious liberty by preventing the government from interfering with the free exercise of religion and by prohibiting the government from sponsoring or advancing religion, or giving preference to one religion over another. While the Marsh decision upheld opening prayers in a state legislature and cited with approval the practice in Congress, the Court relied almost exclusively on historical tradition and provided scant legal reasoning for its conclusions or their application to other church-state issues. In fact, it seems that when Marsh is mentioned in establishment clause cases, such as ones dealing with religious displays on government property, it is simply to illustrate that America’s “separation of church and state” is not absolute and that no single test captures the full breadth of the establishment clause. In one example, Associate Supreme Court Justice Stephen Breyer cited Marsh in his concurrence upholding a Ten Commandments monument on the Texas State capitol grounds to note that “the Establishment Clause does not compel the government to purge from the public sphere all that in any way partakes of the religious.”

While it is certainly true that the First Amendment does not prohibit all religion in the public square—and indeed, protects individual expressions of religion—government-led religious exercises in official government meetings are not easily characterized as mere passing acknowledgments of religion or historical tradition. In Lee v. Weisman (1992), a case invalidating prayer at public school graduations, the Supreme Court succinctly described the danger to religious liberty that applies in the legislative prayer context as well: “If citizens are subjected to state-sponsored religious exercises, the state disavows its own duty to guard and respect that sphere of inviolable conscience and belief which is the mark of a free people.”

In fact, disputes often arise over the boundaries and basis of the Marsh decision, particularly regarding the selection process for prayer-givers and whether the content of the prayers must be “nonsectarian” to avoid promoting a single religious perspective. Although not dispositive, the Court in Marsh noted that the state chaplain’s prayers were typically “nonsectarian,” reflecting more inclusive Judeo-Christian values consistent with “the American civil religion.” That factor has become significant to the lower courts trying to reconcile prayers in a government meeting with the establishment clause principle that government may not favor any one religion over another. Growing religious diversity and the expectation that one’s rights of citizenship are not contingent upon one’s participation in a religious exercise increasingly pose difficult questions for a practice whose justification is more grounded in tradition than in protecting religious freedom for all. Marsh also indicated that even permissible legislative prayers could be carried too far, cautioning that such prayer opportunities should not be “exploited to proselytize or advance any one, or to disparage any other, faith or belief.”

Now, three decades after Marsh, the Supreme Court has returned to the issue of prayers at government meetings to decide whether a practice of mostly Christian, clergy-led prayers at local government meetings violates the establishment clause. The case, Town of Greece v. Galloway, which was argued in early November and will be decided by June, gives the Court a chance to revisit the practice of official prayer in a government forum.

The current lawsuit began when two residents of Greece, New York, a suburban town outside of Rochester, challenged their town board’s practice of inviting local clergy to give a prayer during its monthly meetings. The meetings provide the sole forum for Greece citizens to observe and participate in the work of their local government. Meetings typically involve swearing in of town employees, special recognitions and honors for citizens, and resident petitions for government action. Unlike in Congress or in most state legislatures, citizens attend these local government meetings to interact with and influence their government officials about specific issues that affect their lives.

The town’s prayer practice began in 1999, following the election of a new town supervisor who chose to replace the board’s previous tradition of opening meetings with a moment of silence by making prayers part of each month’s official agenda. At the beginning of the meetings, after the Pledge of Allegiance, an invited clergyperson typically faces the citizens (who face the town board and other town officials) and leads them in prayer, often asking attendees to join in. Unlike in most state legislatures and Congress, the town offers no guidelines to prayer-givers explaining the purpose of the prayers to solemnize the proceedings or the need to use inclusive language and avoid proselytizing or advancing any one religion or disparaging others as Marsh instructed. The record, which includes videotaped recordings of the proceedings for several years, shows that most of the prayers were explicitly Christian and were often offered on everyone’s behalf, with a request for citizen participation.

The plaintiffs, represented by Americans United for the Separation of Church and State, sued the town, arguing that they and other citizens who are nonreligious or adherents of non-Christian religions are put in the position of either participating in a religious practice invoking beliefs they do not share or appearing to show disrespect. While the district court ruled for the town, the plaintiff residents successfully appealed to the U.S. Court of Appeals for the Second Circuit. On appeal they argued that the Greece prayer-givers (often honored as “town chaplain of the month”) and prayers were overwhelmingly Christian and offered in a setting in which adults and children were pressured to participate.

The Second Circuit held that the “totality of the circumstances” indicated that the town had affiliated itself with a single religion, in violation of Marsh. Quoting Marsh, the court observed that “we need not ‘embark on a sensitive evaluation’ or ‘parse the content of a particular prayer,’ . . . to recognize that most of the prayers at issue here contained uniquely Christian references.” Moreover, the town’s position—that it would accept volunteers of any faith—was undercut by its failure to ever announce such an all-comers policy and by its reliance on a select few recurrent volunteers, which “virtually ensured a Christian viewpoint.” The participation of a few individuals from other faiths in the year the litigation began could not overcome the fact that the town’s prayer practice overwhelmingly associated the town with Christianity alone.

The U.S. Supreme Court granted the town’s petition for review, providing an opportunity to clarify the basis and boundaries of Marsh. The town of Greece argued that its practice simply followed Marsh, and that Marsh is fully consistent with the establishment clause, rather than a constitutional outlier. The town argued that the establishment clause does not require that the state be neutral toward religion but “was designed to prohibit the establishment of a national religion” and prohibit “compelling the payment of taxes to support a favored religion or by compelling obedience to the tenets of a particular faith.” This narrow view of no establishment welcomes prayer practices that advance Christianity in a government forum. While the town acknowledged that Marsh does not allow prayers that proselytize or disparage other religions, it argued that it would be unconstitutional censorship for the government to exercise any control over the content of prayers offered on its behalf by local clergy.

The plaintiffs (now respondents) argued that Marsh did not allow prayer in a coercive environment, such as where citizens attend in order to interact directly with their representatives, and did not approve the kind of overtly, exclusively Christian prayers that were common at town board meetings in Greece. Both factors, they argued, distinguished the facts in Greece from those upheld in Marsh (and, by extension, in Congress), and thus require finding an establishment clause violation. At the very least, respondents argued, the town must have a policy that instructs those who give prayers to avoid using sectarian references or asking attendees to join the prayers.

At oral arguments the Court seemed to struggle with finding a principle, as opposed to simply historical tradition, that would support the prayer practice in Congress but avoid the kind of faith-specific and coercive prayer practice that makes religion appear relevant to one’s political rights. While both sides were wary of the government’s involvement in religious practices, neither offered a simple solution. The town offered no rational basis beyond history to support its “anything goes” proposition and rejected the notion that the government was responsible for the prayers, much less that they must be inclusive. The respondents, on the other hand, argued that, under Marsh, the government’s religious expression must be “nonsectarian.”

Though it was not argued explicitly, the option of avoiding prayers in the forum altogether or having a moment of silence presented obvious and superior alternatives for ensuring that the government protects the liberty of conscience and religious freedom of all.