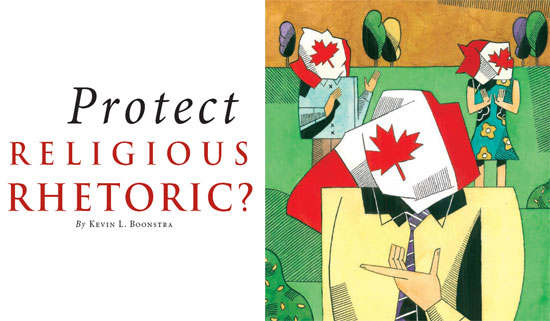 Deeply held religious faith permeates every sphere of life. Spiritual people cannot segregate their religious belief from their mundane, daily life. A robust understanding of religious liberty would not require that they try to do so.

As has been discovered by a teacher in British Columbia, when one's religious beliefs contradict secular values, full participation in the life of one's community can be jeopardized. So can one's membership in his or her professional association and, indeed, his or her ability to continue making a living. How can a country that appears to have such strong protections for religious belief and practice permit this to occur?

Chris Kempling is a public school teacher and counselor in the small northern town of Quesnel, British Columbia. He is a devoted evangelical Christian and is outspoken in his community. He is concerned about what he sees occurring in Canadian society, particularly with respect to the growing acceptance of the homosexual lifestyle, which Mr. Kempling believes to be both unhealthy and immoral.

Between 1997 and 2000 Mr. Kempling wrote and published an article and a series of letters to the editor in his local newspaper, the Quesnel Cariboo Observer. Mr. Kempling's topic was homosexuality and homosexual relationships. Not surprisingly, Mr. Kempling is opposed to homosexual behavior because of his religious beliefs, and his beliefs were discussed at length in the articles and letters he published. There were even specific scriptural references that made the religious origin of his beliefs and comments quite clear.

His professional body, the British Columbia College of Teachers, received a complaint about his writings and decided that he had been guilty of conduct unbecoming a member. The College of Teachers found that Mr. Kempling's writings demonstrated that "he is not prepared to take into account the core values of the educational systems which recognizes that homosexuals have a right to equality, personal dignity and respect.. . . "

Mr. Kempling challenged the college's decision in court, arguing that it and the punishment handed out to him (a one-month suspension) infringed on his freedom of religion and freedom of expression under the Canadian Charter of Rights and Freedoms (the "Charter").

At the British Columbia Supreme Court, Mr. Kempling lost his case. The judge held that since Mr. Kempling referenced his position as a public school teacher in his writings, the statements that he made were not protected by the Charter. This was a very peculiar result. In effect, the court held that one has no freedom of expression or freedom of religion in the context of one's employment or profession. If this were the true state of Canadian law, a professional person could never reference his or her professional expertise without risking that very designation if the professional disciplinary body believes that the statements could be discriminatory.

Mr. Kempling appealed the court's decision. Interestingly, the College of Teachers did not support the lower court's ruling, conceding that the discipline did breach Mr. Kempling's Charter rights, but arguing that the breaches were justifiable.

On June 13, 2005, the B.C. Court of Appeal upheld the lower court decision but for different reasons. The Court of Appeal rejected the notion that Mr. Kempling's religious expression was not protected by the Charter but agreed with the college that its disciplinary decision was justifiable.

Discriminatory Statements?
The Court of Appeal agreed that Mr. Kempling's public statements were discriminatory. It was argued before the court that in debates about moral issues, those on either side of the debate judge and often denounce particular actions and behaviors of others. This is particularly true when the issue under debate is one on which religions have much to say, such as homosexual relationships and behaviors. Such debates are often emotional and controversial. That is the very nature of religious disagreement in a free and democratic society.

Labeling one side of the debate as discriminatory can have the effect of shutting down that viewpoint. That risks undermining a vibrant notion of pluralism and, worse, risks silencing those with religious objections to certain sexual conduct.

The court agreed that "statements critical of a person's way of life or which denounce a particular lifestyle are not in themselves discriminatory." However, the court went on to hold that when such statements "are made in disregard of an individual's inherent dignity," they become discriminatory. This is quite confusing at first blush. How can someone know, when being critical of a certain lifestyle, whether they are disregarding someone else's dignity? How can this test effectively be used to govern one's statements without having a massive chilling effect on free expression?

The court attempted to explain the difference. It held that when statements are based on stereotypical notions about homosexuality, they evidence a willingness to judge individuals on the basis of those stereotypes. With this logic in hand, the court concluded that Mr. Kempling's statements that "gay people are seriously at risk. . . because of their sexual behaviour" and that the homosexual community engages in "irresponsible behaviour" were discriminatory against homosexuals.

This reasoning lessens the constitutional protection afforded to an individual who makes statements concerning the sexual behavior of homosexuals because the statements are made about the group as a whole. Based on this decision, it is much easier to find that an infringement of freedom of expression or freedom of religion is justifiable if the underlying religiously motivated speech is deemed to be "discriminatory" and therefore less worthy of protection.

The protection afforded to gays and lesbians in Canada is based on their membership in a group that is defined by its sexual practices. Criticism of the group because of the sexual practices of many of the members of the group is deemed "discriminatory" because it is perceived to show a willingness to judge individual homosexuals on the basis of group "stereotypes."

The question then arises: If Mr. Kempling had deliberately recast his remarks to criticize only persons who engage in very specific sexual behavior, would his speech still be found to be discriminatory? Probably it would. This is so because the court specifically ruled that there is a difference between "reasoned debate" and "discriminatory rhetoric." "Reasoned debate" is permissible and should receive full Charter protection, but "discriminatory rhetoric" will not be permitted. Mr. Kempling's statements were found to fall in the latter category.

It will be very difficult for anyone to distinguish between "reasoned debate" and "discriminatory rhetoric." As is shown by Mr. Kempling's case, those who are members of a professional association, such as teachers, architects, and lawyers, may be penalized for failing to properly discern the dividing line. This will evitably result in a chill on free debate and