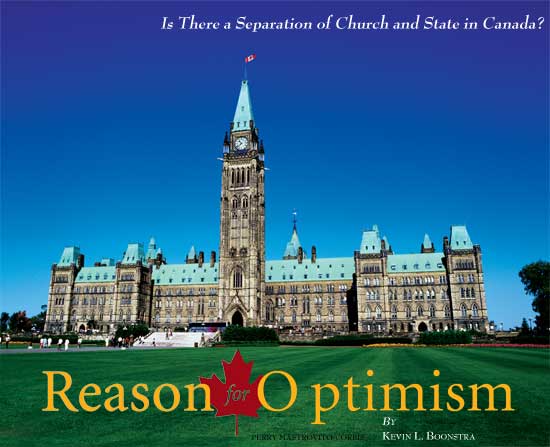 Americans who are curious about such things often ask how the Canadian constitution creates a separation between church and state.

In Canada, religious liberty rights are guaranteed in two different sections of the Charter of Rights and Freedoms. Section 2(a) of the charter indicates that everyone has "freedom of conscience and religion." Section 15 provides a guarantee of equality under and before the law, without discrimination on a number of grounds, including religion.

The difference in the apparent scope of constitutional protection is undoubtedly connected, in part, to the different experiences our two countries had in their formation. The American founding was the product of antigovernment thought, plus an uncomfortable mixture of religious skepticism (fearing that religious groups might take the reins of power) and the religious convictions of Protestant Christianity. The antigovernment thought is evidenced by numerous writers contemporary to the beginnings of the American experiment, as in the Federalist Papers:

The framers of the American Constitution saw the need to ensure that no one religion would dominate their nation. From the perspective of the late 1700s, such a concern arose out of experiences such as the Spanish Inquisition and other efforts in Europe by established churches to control the state and the beliefs of all citizens. Therefore, the American nation incorporated an assurance that there would be no "establishment of religion" within the Constitution.

Against the backdrop of occasionally conflicting philosophies was created the First Amendment protection relating to religious liberty, which protected the free exercise of religion and against the establishment of religion. 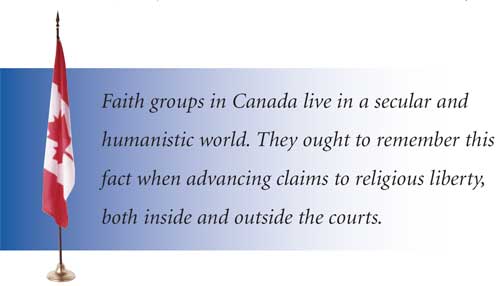 The antiestablishment protection can be seen to accomplish two objectives: (1) protecting religious minorities from the moral dictates of the religious majority; and (2) protecting society generally from the "evil" of religious imperialism. This latter view of the purpose of a protection "from" religion has taken on new importance in a postmodern and "secular" world. Rather than benefiting religion, the antiestablishment clause of the First Amendment has had the effect of hindering opportunities of religious organizations and individuals. For example, the United States Supreme Court has interpreted the antiestablishment clause to prevent both Bible readings in schools as well as state aid to private schools.

In Canada we do not have an expressed freedom "from" religion in the charter as in the antiestablishment clause of the First Amendment. However, as with most things philosophical and economic, the forty-ninth parallel is an imperfect membrane, allowing American religious liberty thought and antiestablishment sentiment to permeate the collective mind of Canadian society.

In Canada we never had the skepticism of the established church shown by those in the United States and, until recently, did not see a strong need for protection "from" religion. From confederation, our formal head of state was also the formal head of the Church of England. Prior to confederation, the Treaty of Paris allowed the Roman Catholic Church to maintain its position of dominance in Lower Canada. The British North America Act in 1867 also structured Canada to allow religious groups to live together without a fundamental distrust of either Protestantism or Catholicism. This accommodating practice has more recently expanded to other faith groups who now enjoy freedom of religion Canadian style.

A number of cases decided in the 1950s by the Supreme Court of Canada (before the passage of the charter) laid a strong foundation for the free exercise of religion in Canada. These cases arose primarily from the intolerance in Quebec society of the Jehovah's Witnesses. The words of Justice Rand, in discussing the validity of a Quebec City bylaw precluding the distribution of pamphlets (aimed at stopping the evangelism of the Jehovah's Witnesses), show a strong inclination toward the protection of a positive right of the free exercise of religion:

"From 1760, therefore, to the present moment religious freedom has, in our legal system, been recognized as a principle of fundamental character; and although we have nothing in the nature of an established church, that the untrammeled affirmations of religious belief and its propagation, personal or institutional, remain of the greatest constitutional significance throughout the Dominion is unquestionable."

"Strictly speaking, civil rights arise from positive law; but freedom of speech, religion and the inviolability of the person, are original freedoms which are at once the necessary attributes and modes of self-expression of human beings and the primary conditions of the community life within a legal order."

The potential for an "established church" was seen as less of a threat to religious liberty than was the secular state. Earlier in that same decision, Justice Rand noted that "the Christian religion, its practices and profession, exhibiting in Europe and America an organic continuity, stands in the first rank of social, political and juristic importance."

In 1982 the Canadian constitution was "repatriated" from the United Kingdom, and for the first time Canada received a bill of civil rights in the form of the charter. The lack of any provision expressly separating church and state created some initial optimism in religious groups in Canada that freedom of religion in Canada would primarily be freedom for religion, as opposed to freedom from religion.

Then, in 1985, the Supreme Court of Canada made its first decision on the meaning of "freedom of conscience and religion." The legislation under attack was the Lord's Day Act, federal legislation that mandated a common day of rest on Sunday. The Queen v. Big M Drug Mart was the appeal of a conviction of Big M Drug Mart for opening on Sunday. The Court had to decide whether legislation with a clearly religious origination was contrary to a new constitutional guarantee of freedom of religion.

The Court said that the Lord's Day Act bound all Canadians to a "sectarian Christian ideal," working a form of coercion that was "inimical to the spirit of the Charter." The Court stated:

"In proclaiming the standards of the Christian faith, the Act creates a climate hostile to, and gives the appearance of discrimination against, non-Christian Canadians. It takes religious values rooted in Christian morality and, using the force of the state, translates them into a positive law binding on believers and non-believers alike. The theological content of the legislation remains as a subtle and constant reminder to religious minorities within the country of their differences with, and alienation from, the dominant religious culture."

"What may appear good and true to a majoritarian religious group, or to the state acting at their behest, may not, for religious reasons, be imposed upon citizens who take a contrary view. The Charter safeguards religious minorities from the threat of 'the tyranny of the majority.' Non-Christians are prohibited for religious reasons from carrying out activities which are otherwise lawful, moral and normal. The arm of the state requires all to remember the Lord's day of the Christians and to keep it holy. The protection of one religion and the concomitant nonprotection of others imports disparate impact destructive of the religious freedom of the collectivity."

This result was influenced by the fact that the very first Supreme Court of Canada decision on freedom of religion was with respect to a law establishing a specific religious practice. It should be reasonably clear to most people who think about religious liberty issues that it is contrary to true freedom that religious practices be imposed on others. Subsequent Canadian cases have found that the charter precludes religious indoctrination in public schools but not education about religion in public schools.

Section 2(a) of the charter was not created solely, or even primarily, to preclude religious dominance of one group over the entire society. It was put in place to ensure that each individual and faith group had the freedom to maintain beliefs and exercise its religion. The "antiestablishment" component of section 2(a) is a necessary part of this freedom, but it is not the primary motivation for freedom of religion.

There is always a risk that, in the hands of a secular society dominated by humanistic thinking, section 2(a) will be interpreted to protect the society from religion and not the reverse. This should not be the focus of a freedom of religion guarantee. Freedom of religion should provide a positive right for citizens to engage in those religious practices that their consciences dictate.

Fortunately, Big M Drug Mart also included some very strong language as to the scope of freedom of religion. Subsequent cases have clarified that individual religious liberty is broad, and recently the Supreme Court of Canada affirmed that freedom of religion "consists of the freedom to undertake practices and harbour beliefs, having a nexus with religion, in which an individual demonstrates he or she sincerely believes or is sincerely undertaking in order to connect with the divine or as a function of his or her spiritual faith, irrespective of whether a particular practice or belief is required by official religious dogma or is in conformity with the position of religious officials."

As a result of this type of analysis, Canadians have not had some of the same difficulties as our American cousins in obtaining a robust protection of religious freedom. To date the Canadian courts have not restricted religious liberty in circumstances in which a generally applicable or "neutral" regulation imposes a burden on religious belief or practice.

This is, in part, because the charter also protects against discrimination on the basis of religion. The antidiscrimination provisions of the charter are useful because the Supreme Court of Canada has held, numerous times, that a facially neutral regulation can be the source of discrimination contrary to the charter. For example, some judges of the Supreme Court of Canada held that a lack of funding of religious schools contravened charter guarantees when Catholic schools were provided funding. A decision that required public funding of religious schools would be almost unthinkable in the U.S.A.

Faith groups in Canada live in a secular and humanistic world. They ought to remember this fact when advancing claims to religious liberty, both inside and outside the courts. This is particularly true for Christian claims to freedom of religious practice, as our society, perhaps to a greater extent than that in the U.S.A., maintains a skepticism of the objectives of Christian groups. There is some distrust of Christianity, based in large part on the dominant position enjoyed by Christianity for a great part of Canadian history.

There are certainly challenges ahead for Canadians of faith. The well-publicized establishment of same-sex marriage in Canada will create dissonance between religious beliefs and practices and social norms that will undoubtedly cause clashes of rights. However, our history provides religious groups with some reason for optimism that freedom of religion, while including a "freedom from" component, will continue to protect a full freedom for religious belief and practice.