Religion and the Schools 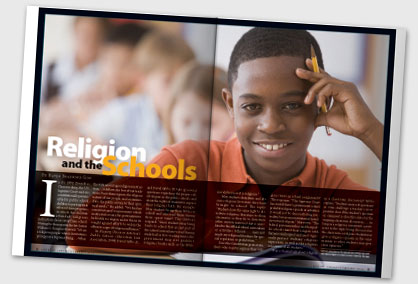 In its 1952 Zorach v. Clauson ruling, the U.S. Supreme Court said it is constitutionally permissible for public school children to participate in released-time programs in which the children attended religious instruction classes away from school. Writing for the majority, the late Justice William O. Douglas observed: “We are a religious people whose institutions presuppose a Supreme Being. . . . When the state encourages religious instruction . . . it follows the best of our traditions. For it then respects the religious nature of our people and accommodates the public service to their spiritual needs.” He added: “We find no constitutional requirement which makes it necessary for government to be hostile to religion and to throw its weight against efforts to widen the effective scope of religious influence.”

In Keeping Christ in America’s Public Schools (Christian Law Association, 2008) David Gibbs, Jr., and David Gibbs, III take up several questions regarding the proper role of religion in the public schools and about the rights of students to express their religious faith. For example: May students bring their Bibles to school and also read them during their spare time? The Gibbses respond: “Since students may bring books to school that are not part of the school curriculum to read during study hall or free-reading times, the government may not prohibit religious books such as the Bible merely because it is religious.”

Does the Constitution protect students who want to express their religious views in school assignments? The response: “The Supreme Court has stated that if a government school prohibits religious speech or activities, it would not be demonstrating neutrality, but an unconstitutional hostility toward religion.” Moreover: “The federal government has said that public schools must treat religion with fairness and respect and must vigorously protect students’ religious expression, as well as the religious conscience of all students.”

Haven Bradford Gow is a TV and radio commentator and writer who teaches religion at a church school in Greenville, Missisippi.