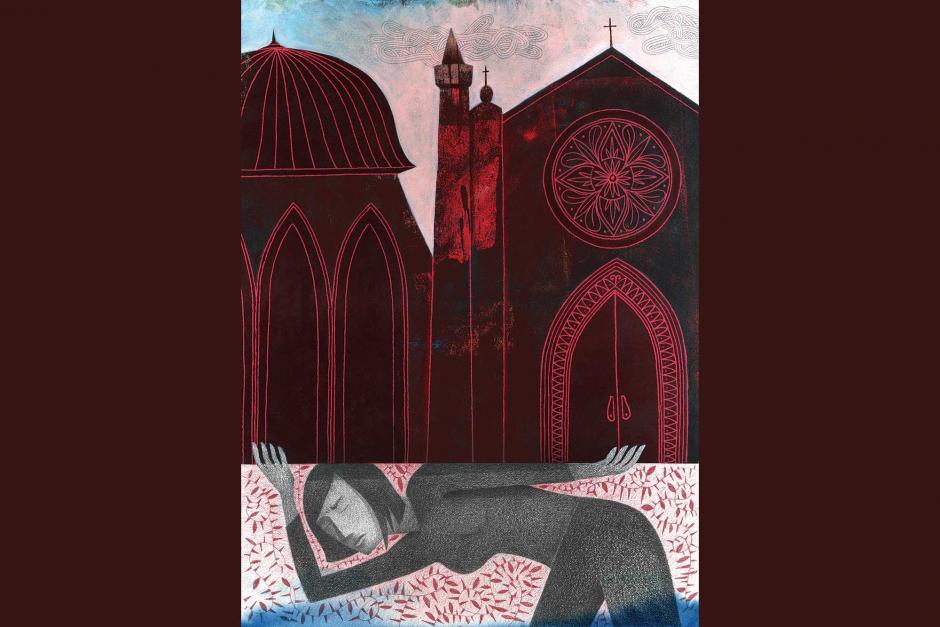 Religion and the Significant Other

If God is male, then the male is God,” a feminist theologian once remarked. Quite an overreaction: but maybe an insight into an all too human dilemma, often projected onto the world of faith.

Throughout history—history being a reliable laboratory of the human condition—the male of our species, empowered by culture, religion, and social norms, has been the dominant force in the long march of the human journey.

But let’s look a little more closely at the topic of religion and the role of women, or lack thereof, in the institutions of organized religion.

Although women are in general more religious, or spiritually minded, than men—see the Pew Research Center, “The Gender Gap in Religion Around the World,” March 22, 2016—they have often been treated offhandedly in the balance of power within the hierarchy of the church, and have been excluded from various roles, decision-making processes, and much more.

“Standard lists of history’s most influential religious figures—among them Abraham, Moses, Jesus, Muhammad, Siddhartha Gautama (the Buddha)—tend to be predominantly, if not exclusively, male. Many religious groups, including Roman Catholics and Orthodox Jews, allow only men to be clergy, while others, including some denominations in the evangelical Protestant tradition, have lifted that restriction only in recent decades.”1

Moreover, while women are demonstrably more religious than men and profess deeper faith and adherence to traditional religious narrative, they are still marginalized and given little power. For example, in the United States women are more likely than men to say religion is very important in their lives (60 percent versus 47 percent).

Why is this gap between the sexes becoming a matter of intense and complicated academic and social debate? “Noting similar gender differences in other countries, mainly in Europe, some social scientists have argued that women are universally more religious than men across all societies, cultures, and faiths. More controversially, a few sociologists have even theorized that the gender gap in religion is biological in nature, possibly stemming from higher levels of testosterone in men or other physical and genetic differences between the sexes.”2

In 2009, while addressing the parliament of the World’s Religions in Australia, former president Jimmy Carter said the following remarkable words: “Women are prevented from playing a full and equal role in many faiths, creating an environment in which violations against women are justified. The belief that women are inferior human beings in the eyes of God,” Mr. Carter continued, “gives excuses to the brutal husband who beats his wife, the soldier who rapes a woman, the employer who has a lower pay scale for women employees, or parents who decide to abort a female embryo.”3

The core issue here, or the main problem, is not the faith community and the religious adherents themselves. They are faithful, moral, and good citizens. Rather, it is in many ways the interpretations of various religious texts that are written in many religions. Take, for instance, the following quotes: “There is of course plenty of fodder, in both the Koran and the Bible, for those who seek a theology of discrimination. The New Testament quotes St. Paul (1 Timothy 2) as saying that women ‘must be silent.’ Deuteronomy declares that if a woman does not bleed on her wedding night, ‘the men of her town shall stone her to death.’ An Orthodox Jewish prayer thanks God, ‘who has not made me a woman.’ The Koran stipulates that a woman shall inherit less than a man, and that a woman’s testimony counts for half a man’s.”4 There are of course cultural and personal aspects to these quotations; and interpretation and matters of authority enter into the discussion—but they have been used by some to confirm horrendous social stigmatization of women in society and the church.

But make no mistake about it: organized religion did advance and create the moral environment to fight slavery and illiteracy, and contributed to the scientific revolution in Europe. There are always two sides to each coin. Religious faith is the great balm to the soul of society, and finding the true God is the greatest quest. The Old Testament promises that “ye shall seek me, and find me when ye shall search for me with all your heart” (Jeremiah 29:13). “Another excellent precedent is slavery. Each of the Abrahamic faiths had to deal with societal slave institutions. Muhammad owned slaves, and St. Paul seems to have condoned slavery. Yet the pioneers of the abolitionist movement were Quakers and evangelicals like William Wilberforce. People of faith ultimately worked ferociously to overthrow an oppressive institution that churches had previously condoned. Today, when religious institutions exclude women from their hierarchies and rituals, the inevitable implication is that females are inferior.”5

To expand and flourish in our age of secularism, modernity, and diversity, the churches must adapt and embrace women as never before. As with all aspects of faith, the vital and irreducible truth must be distinguished from human invention. Women are leading in university studies, and illiteracy is virtually eradicated in North America to a considerable degree. Women are asserting their place in society and have been empowered by the new modes of production, technology, communications, and access to the Internet. They do not face physical barriers; are not diminished in potential by hard farming and manufacturing jobs; and they are now needed to advance our economy and public endeavors.

However, obstacles and old norms within organized religion are still present and enduring. “Religion News Service calculated in 2015 that a majority of religious women belong to a denomination that generally prohibits them from becoming leaders. It’s a disgrace to humanity that for millenniums some placed a divine stamp on discrimination against women, insisting that inequality is actually sacred.”6

Any church culture that teaches women to be submissive or abased, or tolerant of abuse, must be replaced by a new agenda for reform and new thinking of inclusion and compassion. For religious freedom to have a meaningful presence, it must equate the sexes with shared rights and responsibilities. The often improperly applied teaching of male headship, the stigma surrounding divorce that seems more likely to settle on women, and women’s experiences of harassment, all indicate that serious reforms are needed and urgently so.

Women in the Arab World:
The Insignificant Other!

Half a mind, half a creed, half an inheritance.

From West to East, the treatment of women when it comes to religious affairs is striking. In the Arab Middle East, for instance, which is 95 percent of the Muslim faith, women have been under theocratic suppression and control for centuries. The prospect of change is also depressingly negative for the near future.

On December 7, 2006, Time magazine tackled this very subject after the release of the Arab Human Development Report (AHDR), compiled under the auspices of the United Nations Development Fund. The report was titled “Towards the Rise of Women in the Arab World,” and it was written by distinguished Arab thinkers from all walks of life. “ ‘The rise of women,’ the report argues, ‘is in fact a prerequisite for an Arab renaissance and causally linked to the fate of the Arab world and its achievement of human development.’ ”7

The AHDR report identified four major issues that contribute to the plight of Arab women:

What concerns us in this essay is the last item. “Women’s prospects are further weakened by regressive Islamic jurisprudence that effectively codifies discrimination against women. So entrenched has this discrimination become, the report notes, that hundreds of popular Arab proverbs scorn women for having ‘half a mind, half a creed, half an inheritance.’ ”8

The report, furthermore, envisions that for reform to take place, there must be a modernization in interpretation and a new jurisprudence on the part of the religious establishment for an enlightened reading of Koranic texts.

Lest we forget, religion is an intrinsic part of all cultures, not just in the Arab nations. However, religion and culture are so intertwined in the Arab Middle East that most people in the world are unaware of and would be amazed at the level of interdependency. Author Reza Aslan writes tellingly on this subject saying: “No religion exists in a vacuum. On the contrary, every faith is rooted in the soil in which it is planted. It is a fallacy to believe that people of faith derive their values primarily from their Scriptures. The opposite is true. People of faith insert their values into their Scriptures, reading them through the lens of their own culture, ethnic, nationalistic and even political perspectives.”9

To add insult to injury, the few years of the so-called Islamic State in Iraq and Syria during the past decade was one of the worst years for women, especially Christian women in the Arab world, since the Middle Ages.

On June 25, 2015, the Annahar newspaper of Lebanon—one of the leading publications in the region—published a news report on how “ISIS” had transported 42 female hostages from the Yazidi sect in the eastern part of Syria to the marketplace, where they were “sold” for between US$500 and US$2,000 per woman. The sellers told the ISIS fighters that the Yazidi women had converted to Islam, so it was permissible to marry them.

Worse still, on August 13, 2015, the New York Times published a report on the sex slavery trade under the heading “ISIS Enshrines a Theology of Rape.”

Everything Is About Religion

Sally Quinn in her series for the Washington Post on spirituality and religions globally, published, on November 17, 2011, the following summary on her findings under the title “My Five Lessons From ‘On Faith’”:

All Religions Are the Same . . . and Not

Everything Is About Religion

We Are All Looking for Meaning

Why There Is Suffering

Everything is about religion is indeed factual, historically evident and presently so. Sally Quinn wrote a story that is so telling and powerful regarding the same topic: “My friend, Welton Gaddy, a Southern Baptist minister, told me about a friend who informed him she had absolutely no interest in religion. ‘Well,’ he asked her, ‘are you interested in national politics or foreign policy?’ ‘Yes.’ ‘What about abortion, gay marriage, immigration and the environment?’ he asked. Of course she was. ‘Well, then,’ he replied, ‘you’re interested in religion.’

“Gaddy might well have added the financial bailout, poverty, disease, movies, music, holidays, separation of church and state, parenting, sexual abuse, animal rights, sports, books, the Internet, the military, women’s rights, racism, violence, crime, marriage, families, science, medicine and on and on. Everyone is interested in religion. They just don’t know it.”

Thus is the power of religion and its institutions on people’s lives all over the world. That religion and women’s recognition have had challenges for centuries is beyond question. The question is: Can the religious establishments, all of them, adapt to modernity, be relevant, and survive if they continue to marginalize and neglect the rightful place of women among their ranks, especially given the fact that women are universally more religious than men? Can this imbalance in the power structure endure?

Change is inevitable. In the Bible, Old and New Testaments, angels often spoke directly to women. And women first proclaimed a risen Lord. At least the disciples were eventually moved to believe their story.