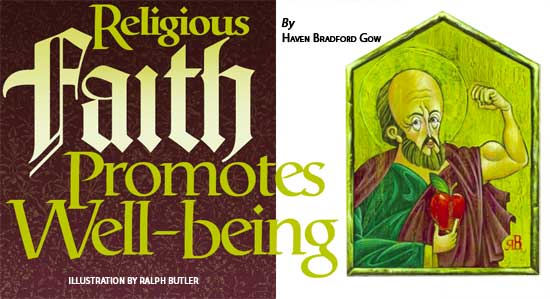 According to physician-medical scholar Dr. Walt Larimore, author of 10 Essentials of Highly Healthy People (Zondervan), several studies demonstrate that religious faith and spirituality can and do have a positive impact on our mental and physical well-being. Please consider:

Longer Life: "Between 1987 and 1995, a nationwide study of more than 21,000 adults showed a seven-year longer life expectancy in those who attended religious services more than once a week when compared to those that never attended."

Lower Blood Pressure: "A study of 401 men in Georgia published by Duke researchers in 1989 showed lower blood pressure (and less hypertension) in those who considered religion very important and who attended church regularly."

Improved Mental Health: "According to a 1997 Duke University study of more than 4,000 adults age 60 and older, frequent attendees at worship services had significantly reduced rates of depression and anxiety."

In his book Faith and Mental Health (Templeton Foundation Press), Dr. Harold Koenig, founder and director of Duke University's Center for the Study of Religion/Spirituality and Health, points out that "many studies have explored the relationship between religious practices and positive emotions such as well-being, happiness, hope, meaning, purpose, and optimism. Of 100 studies that examined religion and well-being prior to the year 2000, nearly 80 percent found a statistically significant relationship between greater religious involvement and greater life satisfaction, happiness, better mood, or higher morals."

In their work The Spiritual Brain (Harper, San Francisco), Cana-dian scholar Mario Beauregard and journalist Denyse O'Leary discuss a study of the impact of religious faith on mental and physical well-being. Social scientists Edward Larson, Dale Matthews, and Constance Berry "conducted a detailed review of 158 medical studies on the effects of religion on health, 77 percent of which demonstrated a positive clinical effect. . . . Similarly, a prospective study of nearly four thousand seniors (aged 64-101) who were not disabled but lived in a residence during 1986-1992 found that private religious activities such as meditation, prayer, and Bible study were associated with greater survival rates." 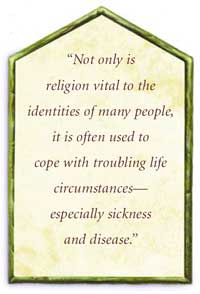 Physician and cancer survivor Dr. Wendy Harpham tells us in her book Diagnosis: Cancer (W. W. Norton) that "a cancer diagnosis challenges your spiritual faith. The effect can vary widely, precipitating intense fear or providing incredible calm. Your faith may fluctuate from day to day, leaving you feeling confused, angry, or lonely. In facing your mortality . . . you put your spiritual beliefs to the test. A cancer diagnosis often prompts patients to ask the big questions, such as, 'What is the meaning of my life?' 'Do I believe in God?' 'Where is God in my time of trouble?'"

In this regard, an article by Carolyn Susman, a health issues writer for the Palm Beach Post, observes: "We probably all know people who believe in the power of prayer to aid the sick. . . . But now, those who believe in prayer are getting support for their views from . . . the scientific community. Praying for sick patients, as a means to get well, may actually contribute to their recovery, according to a new study by Duke University researchers."
According to Tracey Koepke, a spokesperson for the Duke University Medical Center, researchers found that "the patients who were prayed for had better outcomes than the patients who were not prayed for, because they had fewer adverse outcomes than the others."

Jamie Kosik, a researcher at the Florida Cardiovascular Research Center in Atlantis, says this about the Duke study: "It's simply something where you can offer some old-fashioned healing touches and kind words, and we should always be looking at ways to make the patients more comfortable. This would be an excellent way of doing it rather than a pill."

Why should people in the medical profession be concerned about the spiritual aspects of health issues? In his book Spirituality for Patient Care (Templeton Foundation Press), Dr. Harold Koenig, a professor of psychiatry and medicine at Duke Medical Center, explains: "Not only is religion vital to the identities of many people, it is often used to cope with troubling life circumstances—especially sickness and disease. In certain parts of the United States nearly 90 percent of medical patients report that religious belief and practices are important ways that they cope with and make sense of physical illness, and over 40 percent indicate that religion is the most important factor that helps them to cope."

Please consider, too, the medical philosophy of Dr. Thomas Adams, formerly a pediatrician at King's Daughters Hospital, Greenville, Mississippi, who has traveled to various parts of the world as a Christian medical missionary and has also practiced medicine in Washington, D.C. Dr. Adams sees merit in the Asian (or Eastern) approach to medicine, as it takes into account the whole person (mind, body, and soul); he says that while Western medicine emphasizes drugs and technology, the Eastern way recognizes that we often cannot heal the body unless we heal the mind and soul as well.

Concerning this matter of religious faith and mental and physical well-being, in her book, Hope in the Face of Cancer (Harvest House), cancer survivor Dr. Amy Givler, a family physi-cian and professor at Louisiana State Uni-versity Medical Center (Monroe), observes:

"Can someone—no matter how sick—just decide to get better and pop out of bed?. . . . Most doctors can recall a time when a patient outlives all expectations so he or she could attend a wedding, a graduation, a bar mitzvah. But . . . it's not just a matter of wanting to live." 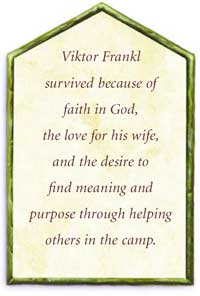 Dr. Givler indicates in her work that recovery from cancer results from a combination of good medicine, religious faith, a positive outlook on life, and good luck. According to Dr. Adam Cohen, a fellow at Duke University Medical Center, several studies reveal that religious people tend to be happier and healthier than nonreligious people, though it is not for certain why. Dr. Cohen says highly spiritual people may be happy and at peace for several reasons, such as appreciating the beauty in nature, feeling close to God, or being more prone to feeling a sense of awe and gratitude.

When the late psychiatrist Dr. Viktor Frankl, author of Man's Search for Meaning (Simon & Schuster, Inc.), was in a Nazi concentration camp, he survived because of faith in God, the love for his wife, and the desire to find meaning and purpose through helping others in the camp. He said he was inspired by fellow camp members who accepted their suffering and hardship with grace and dignity, never forgetting that they possessed intrinsic moral worth and dignity because they were made in the image and likeness of God.

Dr. Frankl's splendid and inspiring words and insights remind me of my late father, Joseph W. Gow. A few years ago I discerned a glimpse of God's love and what heaven must be like as I watched my father die a noble and courageous death from cancer. My father purposefully came home from the hospital that particular day, just so he could prove to me how much he loved me. He was dying an agonizingly painful death from cancer that had spread throughout his body and brain.

Fearing that he would die in a dreary hospital room without having had the opportunity to say goodbye to me, my father ordered the doctor and nurses to permit me to accompany him home, despite the fact he would have to endure excruciating pain.

As I was driving him home, I kept looking at my father in the rearview mirror and thinking about how noble and courageous he was and how precious was each second that he remained alive.

In his own bed, and with me by his side, my father passed away with peace of mind and soul; he understood and taught me through his loving example that one not only must live nobly, but die nobly as well.

I thanked God for inspiring and giving my father the strength and nobility of mind, spirit, and character to show me his selfless, sacrificial, and effusive love. And then I experienced a flash of insight: My father's love was a reflection of God's love for me.

Mr. Gow is a TV and radio commentator and writer who teaches religion to children at Sacred Heart Catholic Church, Greenville, Mississippi.