Religious Freedom Under Attack Around the World 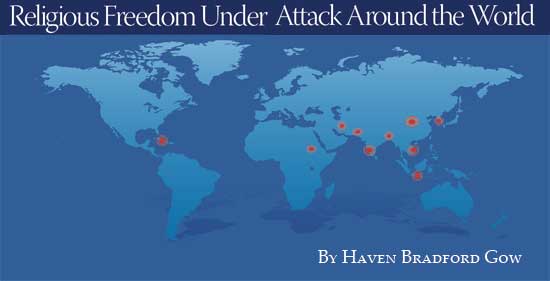 An adjunct fellow at the Claremont Institute in California, Dr. Paul Marshall tells us in Religious Freedom in the World (Nashville, TN: Broadman & Holman) that "by religious. . . persecution, I do not mean human rights violations against 'religious' persons. . . . Rather, we are concerned . . . with the persecution where the focus or the grounds are themselves religious—where a person's religion is a component of the persecution or discrimination they suffer." Dr. Marshall adds: "In the field of human rights, we must elevate concern for religious freedom. . . . It is historically the first freedom in the growth of human rights. Such freedom may at times have more to do with the growth of democracy than might a direct focus on political activity itself."

In her introduction to Martyrs (Maryknoll, N.Y.: Orbis Books), social critic/essayist/poet Susan Bergman observes: "Drawing my finger across a globe of the world, I find the places where [victims of religious persecution] have died. . . . To be a martyr you have to believe that something matters more than life. With the death toll of Christians rising throughout the world in recent years, my thoughts are drawn to the point of intersection between faith and death."

A recent report from Voice of the Martyrs presents disturbing news about religious persecution around the world:

Bangladesh: "Believers are often denied access to public water wells by Muslim extremists, and many have been forced from their homes and beaten by Muslim mobs."

China: "More Christians are in prison or under detention than in any other country in the world.
"The confiscation of church property and Bibles continues—even Bibles officially printed by the government. The house church movement (illegally unregistered churches), which comprises 90 percent of China's Christians, endures unimaginable persecution, yet stands on its commitment to preach the gospel no matter the cost."

Cuba: "Christians are still imprisoned and churches are destroyed."

India: "Hindus who convert to Christianity are often cast out of their families and face poverty and ostracism. In the last year there have been reports of pastors and priests beaten, nuns harassed and raped, and other violence directed at Christians in Orissa and Gujarat."

Indonesia: "There has been orchestrated Islamic jihad against Christians—with over 600 churches destroyed by mobs. Christians have been forcibly converted to Islam, and men, women, and children forcibly circumcised."

Iran: "Believers are discriminated against in education, employment, and property ownership. Pastors have been murdered."

North Korea: "All religions have been harshly repressed. Many thousands of Christians have been murdered since the Korean War."

Pakistan: "Christians are barred from some professions and the most menial tasks are reserved for Christians alone."

Sudan: Acts of religious persecution have included "bombing of Sunday school services, destruction of hospitals, schools, churches, and Christian villages. Pastors and church leaders have been killed. Men, women, and children have been threatened with death or torture if they refuse to convert to Islam."

Vietnam: "Believers are harassed, beaten, and imprisoned for preaching illegally or organizing evangelistic activities. Persecution especially harsh for unregistered and ethnic minority churches. Seeing the role of Christianity in the demise of Communism elsewhere, the regime has attempted to either control or wipe out believers."

The New Testament affirms: "Blessed are they which are persecuted for righteousness' sake" (Matthew 5:10). "All that will live godly in Christ Jesus shall suffer persecution" (1 Timothy 3:12) .
As Susan Bergman observes in her introduction to Martyrs, "Of all spiritual concepts expressed in language, redemption through death seems . . . the most central to Christian faith and the most consistent to appear in the writings of twentieth-century Christian martyrs."

Haven Gow is a TV and radio commentator and writer who teaches religion to children at Sacred Heart Catholic Church in Greenville, Mississippi.