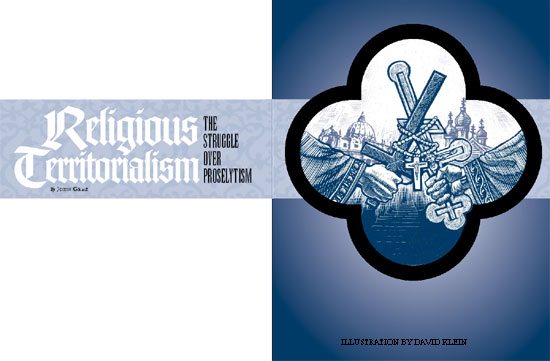 A remarkable conflict is under way between the Russian Orthodox Church and the Roman Catholic Church over the issue of proselytism. It is remarkable because both are branches of Christianity, and therefore, both adhere to the injunction of Christ to spread the gospel into all the world. Indeed, not only have both adhered to the injunction, but, as evidenced by the number of adherents, both have been very successful in the process. So why all the fuss now?

When the Soviet Union collapsed, the ability for churches to operate freely in Russia became a sudden reality. Along with this freedom came efforts to reestablish the Roman Catholic Church, which had been brutally suppressed by the Communists. The Russian Orthodox Church, still recovering from decades of suppression itself, was also in a struggle to reassert its historic influence. Maybe it was inevitable that these two entities driven apart by schism so many centuries earlier would find themselves at odds in such emotive and volatile circumstances. And that eventually elbows would fly as both maneuvered to secure their place in society.

In letters to the Vatican the Moscow Patriarchate stated that the "Catholic hierarchs insist on the right of their Church 'to preach the Gospel to all the people.' This position is unacceptable for the Russian Orthodox Church." Further, in July of 2002 it was reported that "the Russian Orthodox Church has denied the Catholic Church the right 'to preach the Gospel to all people,' particularly in territories under the Moscow Patriarchate."

Added to the rejection of the Roman Catholic Church's right to preach the gospel in Russia is the charge that the Roman Catholic Church is engaged in "proselytism." For many people proselytism, evangelism, and missionary activity are one and the same. But in fact, proselytism has, at least in some contexts, been given a very different meaning. In 1961 the World Council of Churches defined it as "a corruption of Christian witness" that uses "cajolery, bribery, undue pressure, or intimidation, subtly or openly, to bring about seeming conversion." After Vatican II the Roman Catholic Church defined proselytism as "a manner of behaving contrary to the spirit of the Gospel, which makes use of dishonest methods to attract [persons] to a community–for example, by exploiting their ignorance and poverty."

Even if minority faiths are engaging in proselytism in Russia, which they deny strenuously, is that reason enough for the government to suppress religious minorities?

The Best Way to Protect People

The rationale for the limitations on religious freedom for minorities is that these limitations are necessary to protect the public from immoral proselytizing. This assumes that there are no less-restrictive means–that do not violate basic human rights–of accomplishing the goals of protecting society from exploitation. Of course, this is not true. Here are the best ways to protect people from "destructive and extremist movements":

1. Give honest information about these groups by having an open dialogue, including giving them the opportunity to explain openly their beliefs through the mass media.
2. Prosecute those who violate laws against extortion, bodily harm, crimes against property, and other laws designed to protect the legitimate rights and interests of society, irrespective of whether those being prosecuted are part of a religious organization or not.
3. Ensure that peaceful minority faiths are not discriminated against and that they are protected against false charges against them.

"Nontraditional" confessions or religions are not threatening the integrity and traditions of older, better established religions. Indeed, whether the Orthodox Church in Russia, the Catholic Church in Italy, or Lutheranism in Sweden, for example, the established religions are still very much a part of the established life of the nation. Not only are they thriving in their historic home; they are also thriving overseas. For example, Orthodox immigrants are building new churches in primarily Protestant and Catholic countries. Orthodox schools operate freely in these nations, and there is little, if any, fuss about Protestants or Catholics who decide to join the Orthodox Church in the United States or Western Europe. Orthodox communities in these nations are not persecuted or marginalized.

The European Union nations, like the United States, have signed on to the principle that human rights–including religious freedom–are essential values and therefore nonnegotiable. What would happen if every country, under the influence of dominant religion or culture, imposed its values on all its citizens? We would have many different interpretations of the meaning of human rights. We would have secular human rights, Catholic human rights, Protestant human rights, Islamic human rights, and Orthodox human rights. In other words, we would not have human rights at all, but rather, a series of nationally created rights determined not by principle but by place and politics.

Of course, traditions have to be respected and promoted. But you don't preserve tradition by discriminating against different religious views. Appreciation for culture is an organic thing that grows out of a genuine appreciation for the aspects that make up the national culture. As the Soviets found, efforts to coerce a false appreciation for an imposed culture lead, in the long run, to widespread rejection of a culture that is perceived as a force for suppression. The British example amply testifies that freedom is no enemy of tradition and stability of culture.

Religious freedom does not create the conditions for a "wild competition." Quite the contrary. It creates the conditions for the fair expression of various faiths and beliefs in a pluralistic society. Religion is, before all else, a matter of conviction, and a matter of conscience. Do we want to go back to the Dark Ages when the Inquisition made sure that people followed the state religion? We should never forget that every time the church has used the power of the state and the power of legislation to protect itself from competition, the result was good neither for the church nor for the state. And the human costs of such efforts were catastrophic. Religion is best expressed when it is a genuine expression of the authentic beliefs of the adherent, not the coerced expression of the suppressed.

A Code of Good Conduct

Having clearly supported the right to choose and the independence of church from the state, we should admit that a code of good conduct should prevail among believers. After all, there have been documented instances in which believers' zeal outstripped their morality, resulting in dishonest, insensitive, and untoward efforts to convert. Cecil M. Robeck, Jr., writes, "The cultural and ecclesial insensitivity of some contemporary groups has been extremely disturbing to Orthodox and other Christians who paid a severe price for their faithfulness in the midst of Communist oppression. Such insensitivity needs to be challenged. [Even if it] appears that the Orthodox, who admittedly are ill prepared to rush into a fully democratic societal pluralism, have overreacted."

We should not ignore the concerns of the Orthodox Church. There are ways to share beliefs that are not offensive and that contribute to a better understanding between people. Aware of the necessity to promote and to protect religious freedom in respecting others, the experts of the International Religious Liberty Association published "Guiding Principles for the Responsible Dissemination of Religion or Belief," a list of 14 principles.

After establishing the right of religious freedom (principle 1), the document underlines the responsibility of all in the disseminating of religion or belief: "Aware of their common responsibilities, religious communities should build relationships through contacts and conversations, manifesting convictions with humility, respect, and honesty. Dialogue should replace confrontation. In witnessing to others or in planning missionary activity, the inviolable dignity of the addressed persons requires considerations of their history, convictions, way of life, and cultural expressions.

At the end of the day, we will always have people of different faiths and beliefs, and we have to learn to live together in peace. As the apostle Paul recommended, "If it is possible, as far as it depends on you, live at peace with everyone" (Romans 12:18, NIV).*

The friction between Moscow and Rome highlights the complex reality often faced when the principles of religious freedom are applied in a volatile environment. The difficulties brought on by freedom of religion, however, pale in comparison to the catastrophic costs of suppression. Indeed, if we are to have human rights, they must be applied to all of humanity, regardless of the location and situation. It is incumbent on all faiths to approach the situation in Russia with sensitivity. Expressing mutual respect both through consideration and through efforts to support one another's freedom may well lead to not only stronger religious minorities in Russia but also a stronger Orthodox Church.