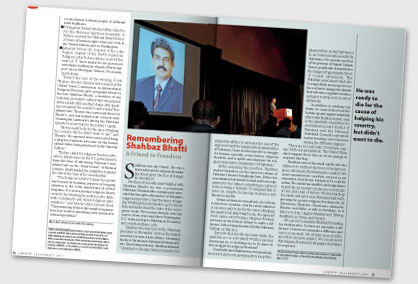 Shahbaz was my friend. He was a brave advocate for religious freedom. He stood up in the face of danger. He was killed.

For those of you who aren't familiar with Shahbaz Bhatti, he was a prominent Pakistani Christian who courageously advocated for the rights of members of Pakistan's religious minorities. I had the honor of helping Washington policymakers get to know him and understand the value of his courageous work. We became friends over the course of two years and three Washington, D.C. visits, my trip to Pakistan in December, and countless phone calls.

Shahbaz was sworn in by the Pakistani president in November 2008 as the federal minister for minorities affairs, becoming the first Christian in Pakistan's federal cabinet. Upon being sworn in, Shahbaz declared: "I decided to become federal minister for minorities affairs to advocate the case of the oppressed and the marginalized communities of Pakistan. I have devoted my life to struggle for human equality, social justice, religious freedom, and to uplift and empower the religious minorities communities of Pakistan."

After assuming the position, Shahbaz worked bravely to see the repeal or reform of Pakistan's abusive blasphemy laws. Before his assassination last month, he had just been reappointed to the cabinet, something he referred to me as being a "miracle." It energized him to press on, despite increasing resistance and threats to his life.

I know at times he was afraid—he told me as much on occasion—but he rarely admitted it. He was ready to die for the cause of helping his country, but didn't want to die. He squeezed every ounce out of being a religious freedom advocate in the federal cabinet to make a difference, before being murdered by the Pakistani Taliban on March 2.

But now that his life has been taken, the question is—so now what? Will his passing discourage us, or challenge us, to do more in this struggle for religious freedom?

Practically (and Shahbaz was very practical), we need to press our government to keep blasphemy reform on the front burner in our bilateral relations with the Pakistanis. His murder and that of the governor of Punjab, Salman Taseer, graphically demonstrates the dangers of ignoring the forces of violent extremism. The Pakistani government must also be respectfully encouraged to use force of law to change the climate that welcomes vigilante violence and gives societal cover to acts of extremism.

In addition to working top down, we come at this from the bottom up and support interfaith efforts that Shahbaz started, such as the interfaith committees he established in every district of Pakistan and the National Interfaith Council to promote understanding and tolerance among the different religions.

These are not easy tasks. It will take courage, both real and political. The United States must support those who are brave enough to step into this fray.

Shahbaz carried his small candle into the darkness to confront the forces of violent religious extremism threatening his country. We must remember his sacrifice, not just as we remember a lost friend, but have it be a call for action. His candle was snuffed out by murderers steps from his mother's home in a cold drizzle of rain and a hail of bullets. We must pick up his candle and carry on in this important work, pressing for greater religious freedoms for all Pakistanis, Muslims, Christians, Ahmadis, Hindus, and Sikhs, as well as elsewhere, be it Baha'is in Iran, Ugghur Muslims and Tibetan Buddhists in China, and beyond.