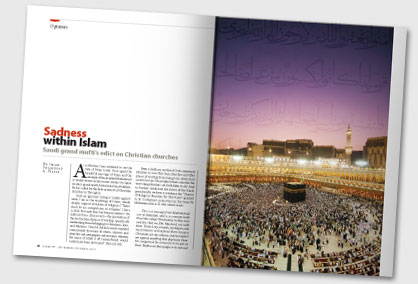 As a Muslim I am saddened to see the state of Islam today. Once again the beautiful message of Islam and the example of the prophet Muhammad is totally absent in the recent verdict by Saudi Arabia's grand mufti Abdul Aziz bin Abdullah. He has called for the destruction of all Christian churches in the region.

Such an ignorant ruling is totally against what I see as the teachings of Islam, which clearly support freedom of religion ("There shall be no compulsion in religion" [Sura 2:256]). Not only that, but Islam mandates—by military force, if necessary—the prevention of the destruction of places of worship, specifically mentioning those belonging to Christians, Jews, and Muslims ("And if Allah had not repelled some people by means of others, cloisters and churches and synagogues and mosques, wherein the name of Allah is oft remembered, would surely have been destroyed" [Sura 22:41]).

Even a child can see that if God commands Muslims to save Christian churches and other places of worship from being torn down, how could God (or His prophet) then sanction the very thing Muslims are forbidden to do? And to further invalidate the fatwa of the Saudi grand mufti, we have as evidence the "Charter of Religious Freedom for Christians" granted to St. Catherine's monastery in the Sinai by Muhammad in A.D. 628, which reads:

This is a message from Muhammad, son of Abdullah, and is a covenant with those who adopt Christianity, be they near and far, that we [the Muslims] are with them. Verily I, my servants, my helpers, and my followers will defend them because Christians are my citizens; and by Allah! I am against anything that displeases them. No compulsion [to convert] is to be put on them. Neither are their judges to be removed from their posts, nor their monks from their monasteries. No one is to destroy a house of their religion, nor damage it, or carry anything from it to the houses of the Muslims. Should anyone do any of these, he would spoil God's covenant and disobey His Prophet. Verily, they are my allies and have my secure charter [of protection]. No one can force them to migrate or oblige them to fight during wartime. The Muslims are to fight for them. If a female Christian is married to a Muslim, it must not take place without her approval. She is not to be prevented from visiting her church to pray. Their churches are to be respected. Christians are not to be prevented from repairing them. . . . No one of the nation [of Muslims] is to disobey this covenant until the Day of Judgment.

The Saudi grand mufti's extremist and un-Islamic edict fosters radicalism and animosity toward Christians, as well as prejudice against Islam in the world at large. Any resulting destruction of property or loss of life suffered by Christians at the hands of Muslims will be on his hands as well for instigating such reprehensible hatred and evil.

Ironically, at the same time as the Saudi grand mufti was inciting intolerance, destruction, and potential murder, Saudi king Abdullah was in Spain attending a Christian interfaith conference where he was extolling the peace, love, and tolerance of Islam. It's too bad these admirable qualities are so noticeably absent in the Saudi kingdom. It would be admirable if the king hosted an interfaith conference in Mecca or Medina, and allowed Christians and other "religious minorities" in his country to build and inhabit their places of worship in peace and security. He would then be following the example of the greatest grand mufti in Islam, the prophet Muhammad.

The prophet, by way of example, left a tradition for Muslims to host peoples of other faiths in the Muslim sacred cities. Let us not forget that the prophet hosted several delegations from other faiths in Muslim mosques, including the famous event of allowing the Christians of Najran to worship in the prophet's mosque in Medina. How can the Saudi kingdom prohibit the entry of non-Muslims into Mecca or Medina? It runs contrary to the practice of the prophet himself.

Extremism is running high in the kingdom toward Muslims and non-Muslims alike. Mufti Abdul Aziz bin Abdullah bin Baz has issued a verdict proposing the killing of Muslims who will not adopt the practice of offering daily prayers. In his book of edicts, Fatawa, published in 1995, he explicitly asks the authorities to force Muslims into repentance, and in cases of resistance writes, "Kill them."

This is why the edict by the Saudi grand mufti is such a disgrace—worse, an insult—to Islam. Can he truly be ignorant of the many verses in the Quran and the examples of the prophet that contravene and outright prohibit the intolerance, violence, and destruction his edict will generate?

Doesn't the grand mufti remember that the prophet sent his persecuted Muslim followers to seek asylum in Abyssinia (now Ethiopia)—a Christian-ruled country? And doesn't the grand mufti know about the Charter of Medina that Muhammad, as the elected chief executive, signed along with all other leaders from the town's religious and tribal groups? In that charter of religious freedom and mutual protection, they pledged that all the residents of Medina, regardless of their faith or tribe, would live peacefully together and defend each other and their city against attack. Everyone would be free to worship as they pleased, with no forced conversion to Islam or any other religion.

At the time of the prophet Muhammad, the Muslims, Jews, Christians, and pagans in Medina were all allowed to pray according to their own beliefs and rituals without fear of persecution or violence against them or their places of worship. This is the true example of Islam set by the prophet Muhammad, which the Saudi grand mufti and all those who agree with his edict against the Christians are disobeying.

They all seem to have forgotten that the prophet remains the best and final word for Muslims. I fear their amnesia will cost them dearly.