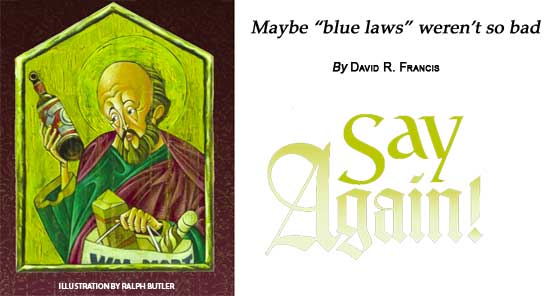 Liberty is long on record as opposing so-called "blue laws." With varying amounts of cover these are laws with a religious basis. Invariably they uphold a particular view of faith and use the force of law to demand compliance. This article, like many of late, looks at blue laws through the rose-tinted glasses of nostalgia for a lost Eden. But the article chooses to ignore the reasonable theological debate over what is the biblical Sabbath (even the Vatican, in the document Dies Domini, freely acknowledges that the biblical Sabbath is Saturday), it slides past the advisability of state support for a religious practice, and falls for the fallacy of thinking that because some good might derive from the situation it is justified. See the article on religious faith and well-being for statistical proof of the value in a life of faith. However, the Constitution is very plain that the government is not to restrict free exercise of religion, which rather perversely blue laws do.—Editor.

Recall the political storms in the United States over lifting bans on opening stores on Sundays—the so-called "blue laws."

Christian ministers would point to God's fourth commandment: "Remember the sabbath day, to keep it holy" (Exodus 20:8). Owners of mom-and-pop retail shops would plead to keep a legal "day of rest" that prevented big stores from luring away business by staying open on Sundays.

But growing numbers of women worked outside the home and found it difficult to shop during the week. States hoped Sunday store hours would boost tax revenues.

Today, the battle is largely over. In most parts of the country, one can easily find stores open on Sunday. Over the past two or three decades, state blue laws limiting retailing on that day have been repealed or weakened.

What have been the consequences?

It may be no surprise that families took advantage of the changes to scoot to the mall on Sundays. Faced with such secular competition, attendance and donations at churches have fallen.

But there was unanticipated fallout as well. New research finds that many youths who had been classified as "religious" because of their church attendance succumbed to temptation after blue laws were replaced. They drank more alcohol and used other drugs.

If teens and young adults attend church services or Sunday school, they will be less likely to drink heavily or use other drugs, he says.

Professor Hungerman and his coauthor, Jonathan Gruber, an economist at the Massachusetts Institute of Technology, have taken what may be the first look at the impact on churches and young people of the erosion of Sunday retail-closing laws.

"We have said for many years that a common day of rest has a whole array of positive social values," says the Diane Kessler, executive director of the Massachusetts Council of Churches. Since church attendance tends to be a family affair, she's "not surprised" to see a correlation between fewer blue laws and more risky behavior among youths.

In recent decades, economists have used their statistical skills to examine not only economic affairs, but also social issues, including religion.

For example, another recent paper by Professor Gruber finds that when there is greater "market density" in religion—that is, more people sharing a religion in an area—religious participation tends to be higher. Further, he finds these areas have higher levels of education, income, and marriage, and lower levels of welfare, disability payments, and divorce.

The Gruber-Hungerman paper—titled "The Church vs. the Mall: What Happens When Religion Faces Increased Secular Competition?"—finds that after blue laws are repealed by a state:

-About 15 percent of those who had been attending religious services weekly no longer attend so regularly.

"Individuals are not dropping out of churchgoing altogether, but rather . . . they are simply going less frequently," the authors write.

-Religious contributions decline 13 percent, or about $109 per person per year. Spending by religious institutions falls by about 6.3 percent.

-Drinking rates by young people go up. Before repeal, about 40 percent of nonreligious youths (those in their late teens and 20s) reported having had six or more drinks at one sitting sometime in the past month. About 30 percent of youths defined as "religious" because of their church attendance reported such episodes of heavy drinking.

After repeal, that 10 percent gap closed by about half—the religious drank more.

-Similarly, the gap between the nonreligious and the religious taking cocaine (3 percent vs. 1.5 percent) closed entirely.

Key data for these findings come from the huge National Longitudinal Survey of Youth, started in 1979 and repeated in several subsequent years.

David Laband, an economist at Auburn University in Alabama and author of a 1987 book on the history of blue laws, says the Gruber-Hungerman findings on religious attendance and contributions after repeal are new, but comparable to noting that "water runs downhill." He's skeptical of the findings on alcohol and recreational drug use, however, especially since drug use is still illegal. "Some of it does not add up to me," he says.

Regardless, the study raises an old issue: To what extent should government interfere in activities of its citizens, even when that interference may be helpful?

"Who am to I say that people shouldn't go shopping on Sunday?" Hungerman says.