Alan J. Reinach November/December 2007
". . . to compel a man to furnish contributions of money for the propagation of opinions which he disbelieves, is sinful and tyrannical.. . . "—Virginia Statute for Religious Freedom

James Madison's famous tract opposing the appropriation of tax dollars for teachers of religion, known simply as the "Memorial and Remonstrance," criticized the idea that the Civil Magistrate may "employ Religion as an engine of Civil policy."1 In the most unflattering terms, Madison described tax support for religion as "an unhallowed perversion of the means of salvation."2

Now consider the 2007 term of the United States Supreme Court, and the Court's deliberation about whether taxpayers can challenge executive branch spending for religion, in Hein v. Freedom From Religion Foundation, Inc.3 According to news reports, it was an obscure decision about an arcane legal principle regarding the doctrine of "standing to sue." The Court opinions brush aside important constitutional issues by rejecting the idea that taxpayers have any right to challenge executive branch spending on religion as a violation of the establishment clause. Yet, to Justice David Souter, writing in dissent, the Court's ruling threatened to "melt away" the establishment clause,4 while the ACLU described the decision as granting the executive branch "license" to violate the Constitution.5

To understand the real significance of this Supreme Court decision, the factual background is essential. Shortly after taking office as president, George W. Bush asked Congress to approve his "faith-based initiative" to ensure that religious organizations are not discriminated against when government funds the provision of social services. While Congress dutifully passed the desired legislation, it languished before the Senate. So President Bush issued a series of executive orders establishing offices in various executive branches. The program became known as the "Faith-Based and Community Initiatives." All of these agencies administer funds allocated by Congress, and distribute them in various government programs.

Enter the Freedom from Religion Foundation, which bills itself as "the largest group of atheists and agnostics in North America."6 This organization has filed numerous lawsuits challenging First Amendment rights to public religious displays, such as monuments of the Ten Commandments. The foundation filed a lawsuit in Wisconsin, calling into question several aspects of the Faith-Based Initiative. In a lower court decision, the district judge held that the funding of MentorKids U.S.A. violated the establishment clause, while approving funding of a nonsectarian program run by Emory University. That decision was not appealed.

MentorKids U.S.A. is a Christian organization established to mentor the children of inmates. It recruits Christians who are expected to share their faith with the kids, introduce them to the Bible, and engage them in Bible study.7 MentorKids U.S.A. said that it used government funds only for recruitment, and not for religious purposes. The court rejected the claim that recruiting Christians to proselytize children is permissible under the First Amendment.

The issue that went to the Supreme Court dealt primarily with whether the foundation could challenge the Bush administration's use of tax dollars to conduct conferences where it promoted the Faith-Based Initiative to the religious community. The district judge said no, but the Seventh Circuit U.S. Court of Appeals, in a divided ruling, said yes.8 Richard Posner, one of the most prominent conservative judges in the nation, wrote the opinion for the appellate court. 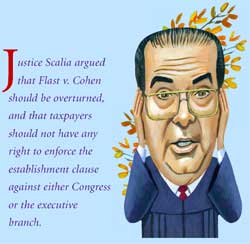 Posner reviewed the legal precedent, including a 1968 Supreme Court decision, Flast v. Cohen, holding that taxpayers can challenge congressional appropriations for religious schools on establishment clause grounds.9 Getting to the heart of the matter, Posner reasoned that "the essence of an establishment of religion is government financial support."10 Then Posner addressed the question whether the rule should be different when the decision to fund religion is made by the executive branch rather than Congress. He insisted that "the difference cannot be controlling." 11 Supreme Court justice Souter, writing in dissent, later observed that the Court opinions failed to explain why there should be such a distinction between spending by Congress or the executive branch. After all, the executive branch can only spend funds allocated by Congress.

Posner seemed to argue that respect for the separation of church and state required the courts to review executive branch spending on religion, for he theorized a situation where the Secretary of Homeland Security "decided to build a mosque and pay an Imam a salary to preach in it because the Secretary believed that federal financial assistance to Islam would reduce the likelihood of Islamist terrorism in the United States." In other words, Posner rejected the notion that the executive branch ought to have unfettered discretion to "make religion an engine of civil policy," to borrow James Madison's phrase.

Kennedy's observation brings to light one of the fatal flaws in the Court's decision. There is an ancient legal maxim that there is no right without a remedy. If someone has a property right, for example, then the courts must be able to fashion a remedy to protect that right. Inadvertently, perhaps, the Supreme Court has now decided that no individual American has any rights protected by the establishment clause, for if there were such a right, there would be a remedy. The Court's decision clearly indicated that there would be no remedy for establishment clause violations that occur when the executive branch decides to spend money on religion.

The decision seems ominous, but it is not surprising. Indeed, it is consistent with an earlier decision eviscerating the free exercise clause. In 1990, the Court ruled in Employment Division v. Smith14 that no one can assert a free exercise right against laws that are "facially neutral" and "generally applicable" regardless of how severely they may effectively infringe on one's religion. In other words, as long as Congress drafts its laws in such a way that they appear to apply evenly to everyone, it doesn't matter whether the laws actually restrict religious freedom.

The Hein decision has the same practical result. As long as Congress doesn't allocate money directly for religion, the executive branch can divert the funds for religious purposes with impunity. Only Congress has any authority to rein in the president. No American can challenge the spending in the Court under the establishment clause.

"Little. . . in practical experience indicates that such public officials are inclined to pay much mind to the separation of church and state. Although it purports to be only a decision about who may sue, and not what the Constitution permits, the practical effect of today's decision is that the Establishment Clause means only what the Executive Branch says it means. That is no security for religious freedom at all."15

Consider the immediate impact of the decision on MentorKids U.S.A. Although the Wisconsin court decision still stands, MentorKids U.S.A. remains free to reapply for federal funding in the other 49 states, so that it can continue to recruit Christians to minister to children of inmates. A federal agency will have authority to determine whether such grants should be approved as consistent with the establishment clause. It is doubtful that agency bureaucrats will be motivated to closely examine grant applicants' representations that they will not use the funds for religious purposes.

In 2002, the Supreme Court decided that state funding of religious schools by means of "school vouchers" was constitutional, relying on the program's subterfuge that funds were given to the parents, not directly to the schools.16 However, the Court refused to reverse decades of decisions denying any government the power to fund religious schools directly. The Hein decision has now created a mechanism for the federal government to fund religion directly, without fear of judicial restraint. Should the Department of Education, for example, adopt new regulations for the distribution of school funding that requires the inclusion of religious schools, it would be up to Congress to enact more restrictive rules; no citizen could file a legal challenge.

Ironically, Justice Alito's decision invoked the doctrine of "the separation of powers." He argued that the Constitution imposes strict limits on the power of courts to decide actual cases or controversies, and that establishment clause violations do not cause the sort of injuries a court can adjudicate. Of course, Alito fails to explain why this logic would not require overturning Flast v. Cohen.

Justice Alito's argument turns the very purpose of the separation of powers upside down. "The nation subscribes to the original premise of the framers of the Constitution that the way to safeguard against tyranny is to separate the powers of government among three branches so that each branch checks the other two."17 Despite the obvious premise that the separation of powers must be accompanied by the power of each branch to provide a check and balance for the other two, Justice Alito held that the Supreme Court lacks the power to determine whether the executive branch has violated the establishment clause in some cases. Although the principle has not been applied to a wide variety of other establishment clause cases, it is difficult to see why a citizen ought to have more right to challenge a public display of a cr