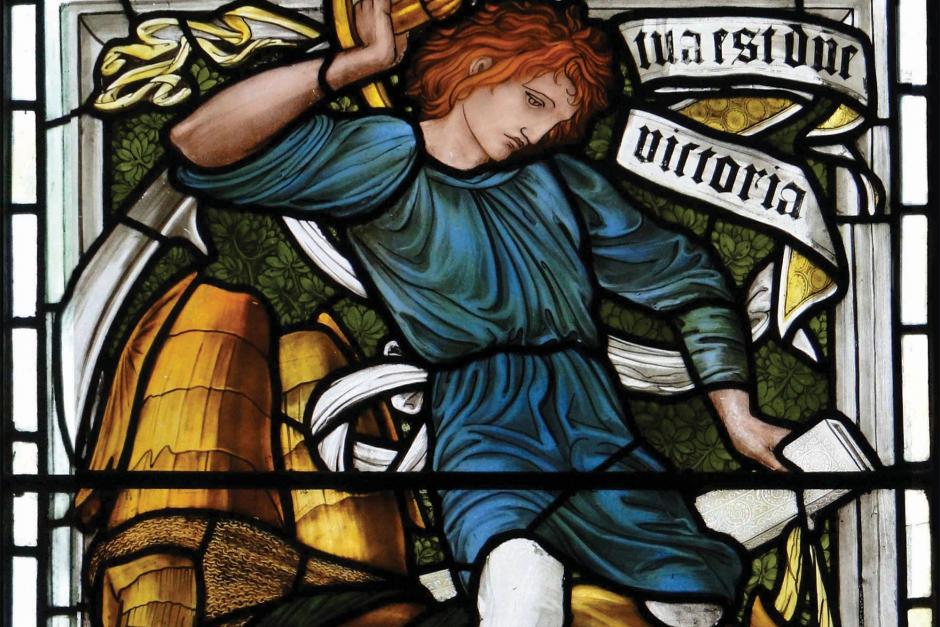 Self-defense and the Christian

The angel sent to guard Eden was armed with a sword (Genesis 3:24). An angel armed with a sword appeared to Balaam (Numbers 22:23), and Jesus as the leader of the heavenly hosts appeared before Joshua armed with a sword (Joshua 5:13). Were these weapons or symbolism? And if symbolism, of what?The Mosaic law enshrined the right of lethal violence in self-defense (Exodus 22:2). The psalmist wrote, “God is our refuge and strength, a very present help in trouble” (Psalm 46:1), which did not conflict with praising God, “who trains my hands for war, and my fingers for battle” (Psalm 144:1, NKJV). David was indeed prepared for his battle with Goliath. He was skilled in the use of a sling—the rapid-fire and lethal assault weapon of his day. Solomon wrote, “The horse is prepared against the day of battle; but safety is of the Lord” (Proverbs 21:31). We might train for war and prepare the horse for battle, but we then trust the outcome to God. Furthermore, “Like a muddied spring or a polluted fountain is a righteous man who gives way before the wicked” (Proverbs 25:26, ESV).

Abraham, the father of the faithful, maintained a household with 318 men trained in the use of the modern weapons of his era (Genesis 14). He led this trained and equipped army of household servants to rescue Lot, his family, and many innocents from foreign enslavement. On his return Melchizedek (a forerunner of Christ) personally blessed Abraham and affirmed that God had given him the victory (Genesis 14:20). Commenting on this story, Ellen G. White, one of the founders of the Seventh-day Adventist Church, wrote: “Seeking, first of all, divine counsel, Abraham prepared for war. From his own encampment, he summoned three hundred and eighteen trained servants, men trained in the fear of God, in the service of their master, and in the practice of arms. . . . It was seen that righteousness is not cowardice, and that Abraham’s religion made him courageous in maintaining the right and defending the oppressed. His heroic act gave him a widespread influence among the surrounding tribes.”

In 1 Samuel 11:1-4 King Nahash of Ammon attacked Jabesh Gilead, threatening to gouge out the right eye of every inhabitant as a disgrace to all Israel. What should Saul have done? Based on a popular interpretation of Matthew 5:38, 39, he might have sent a message to the inhabitants of Jabesh Gilead, saying, “Do not resist the evil, but offer to the enemy your left eyes also. We will stay here and weep for you.” What actually happened? Scripture records that “the Spirit of God came upon Saul” (1 Samuel 11:6, NKJV), inspiring him to respond militarily, saving the people of Jabesh Gilead. Clearly the Spirit of God inspired this military deliverance.

When under threat of attack while rebuilding the walls of Jerusalem, Nehemiah recorded that “we prayed to our God and set a guard” (Nehemiah 4:9, ESV). He encouraged the people thus, “Do not be afraid of them. Remember the Lord, who is great and awesome, and fight for your brothers, your sons, your daughters, your wives, and your homes” (verse 14, ESV). Those who worked carried materials in one hand and their swords in their other hand (verses 14-18). God blessed their work and the walls went up!

In Esther’s time the Jews were about to come under attack as a result of Haman’s ethnic and religious hatred. They prayed, fasted, and then banded themselves together in citizen bands, each with their own weapons, and destroyed any who came against them. Once again God clearly blessed this act of righteous self-defense against those inspired by ethnic bigotry and religious hatred of God’s followers on earth.

Moving to the New Testament, what do we make of Jesus’ teaching about turning the other cheek (Matthew 5:38, 39)? A slap to the right cheek is humiliating, but it is not life-threatening. If insulted, ridiculed, or demeaned, we should not retaliate, but rather “turn to him the other also.” We are enjoined to bear patiently the humiliation. But if we are to be consistent with the above biblical characters, all of whom were inspired by the Spirit of God to military action in defense of God’s people, we must conclude that self-defense from deadly force isn’t being addressed in this teaching of Jesus. We are not to offer our other jugular also if under an attack that seeks not merely our reputation but our very life!

What about Matthew 26:52? “For all they that take the sword shall perish with the sword.” Peter was not told to throw the sword away, but to put it back into its place. He was not to fight the detachment of soldiers coming to arrest Jesus (John 18:3). Likewise, we are not to draw the sword against duly authorized officials of the law, who are duty-bound to bear the sword. If Jesus meant everyone in this statement, He was also condemning every law officer. Scripture calls those authorities who bear the sword to execute wrath on evildoers the “ministers of God” (Romans 13:4). The Bible thus teaches that there is a legitimate use of the sword and also an illegitimate use of the sword (Revelation 13:10), and those that kill illegitimately will face eternal judgment.

We Adventists ourselves might reflect on the evidence from the life of Ellen White, one of the founders of our denomination. White’s own family owned rifles and used them to feed themselves. White traveled with bodyguards armed with repeating rifles for personal protection. White also counseled her husband to take time off to fish, camp, and hunt. She recorded a man using firearms to gain back stolen animals, and commented positively on a white man who used “brandished a revolver” to halt the thrashing of a “leading black believer.” And God’s role for men in the family? “The Lord has constituted the husband the head of the wife to be her protector.” “But if any provide not for his own, and especially for those of his own house, he is worse than an infidel” (1 Timothy 5:8). Husbands are to provide food and protection for their wives. Those who refuse to protect or provide for their family are worse than an unbeliever.

And there is the evidence from history. Having served as a pastor in Ireland, having seen at firsthand the bitter armed struggle between Protestants and Catholics in Northern Ireland, and being a keen student of European history, I am acutely aware of the absolute necessity it has been for Protestants over the centuries to bear arms in the face of aggressive papal onslaught. The lesson of the Spanish Armada, the Waldenses, the Hussites, the Bohemians, the Huguenots, the Cathars, the Battle of the Boyne, the German Electors, the Glorious Revolution of 1688, the English civil war, and the Thirty Years’ War is that Protestant armies comprised of armed citizens were essential to resisting papal aggression. Without Protestant citizen armies, armed and willing to take the field of battle, the Protestant Reformation may never have survived. In our modern era the Christians of northern Iraq and Nigeria, under savage assault by Boko Haram and ISIS, would suffer even greater loss without armed men willing to defend them. Sometimes those defenders are government forces, but often they are local Christian militias, stepping in to defend the innocent against murderous assault, when it is politically convenient for governments to look the other way.

And so I might mention an official SDA statement on automatic weapons. The specific recommendation is as follows: “The sale of automatic or semi-automatic assault weapons should be strictly controlled. This would reduce the use of weapons by mentally disturbed people and criminals, especially those involved in drug and gang activities.” As many church institutions around the world are protected by private guards armed with either shotguns or semi-automatic weapons, clearly the official statement could not speak to restricting law-abiding church leaders or regular members from availing themselves of weapons for defensive purposes.

In conclusion, the general right to self-defense is clearly biblical. Christians are not to use violence for propagating the gospel, for personal revenge or out of hatred, but they do clearly seem to have the right to use arms in defense of themselves, their family, and the community of faith when under attack. In this context theologian Norman Geisler argues convincingly that “to permit murder when one could have prevented it is morally wrong. To allow a rape when one could have hindered it is an evil. To watch an act of cruelty to children without trying to intervene is morally inexcusable. In brief, not resisting evil is an evil of omission, and an evil of omission can be just as evil as an evil of commission. A man who refuses to protect his wife and children against a violent intruder fails them morally.”

Living in an evil world, difficult choices are forced upon us. I hope and pray that I never have to defend my family, myself, or a neighbor from a violent assault, but if that evil day comes, as a husband and father it is my responsibility to take all necessary measures to protect the innocents whom God has entrusted to my care.

This opinion piece is placed in Liberty as part response to the significant number of readers who objected to our July/August cover article “Too Long Silent.” That article presented a moral case for limiting access to military-style weaponry and argued that Christians should not be part of a gun and violence culture. Its points were of course consistent with my church’s previous statement on automatic rifles and the warnings of Jesus to those who might seek violent solutions to spiritual problems. But there is clearly another aspect, which John Whitcombe presents by analogy and Bible history. Where we must be very cautious is the tendency of humans to conflate their views with God’s and justify even violent acts. We must be a little cynical of just war theory, which once served to justify Christian hegemony by civil powers. And we must always keep in mind our higher loyalty to God and His principles as we respond to secular power, which too easily reverts to force to accomplish its ends and will often require citizen participation. Lincoln Steed, Editor.

John Whitcombe, a minister of religion, writes from Montana, where bears are frequently seen!