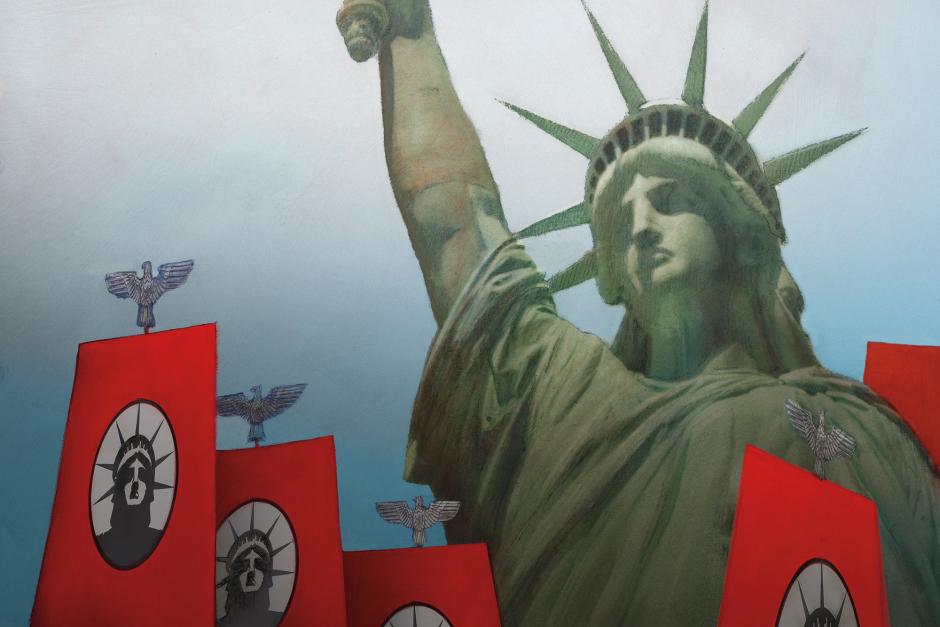 When we were brought face to face with tyranny—with a kind of tyranny [Communism, Fascism and Nazism] that surpassed the boldest imagination of the most powerful thinkers of the past,” wrote Leo Strauss, one of the twentieth century’s leading political philosophers, “our political science failed to recognize it.”1 Actually many leading intellectuals of the twentieth century acclaimed and supported its emergence: Martin Heidegger and Carl Schmitt come to mind. But why did political science fail to recognize it? Why were “lights” like Heidegger seduced by the darkness of Nazism? Indeed, why were those supposed to see blind to the palpable diabolical evil of totalitarianism?

This question must be reasked. Primal passions: fear, egoism, anger, and hatred, the kind that Mussolini and Hitler exploited and mobilized, are once again potent factors in the politics of Western democracies. Driving these passions is the same disillusionment with liberal democracy, the same gnawing sense of overwhelming crisis that things are falling apart and the center cannot hold. The parallels with Europe in the 1920s are ominously striking.

Just as the post-World War I chaos, economic insecurity, the spread of Bolshevism and the political ineptness of liberal democratic regimes in the face of these challenges opened the way for Fascism and Nazism; similarly today, the post-cold war chaos, economic insecurity, the spread of jihadist Islam, and the political paralysis of liberal democracies have opened the way for the extreme politics of the Radical Right. Again just as Bolsheviks and Fascists/Nazis symbiotically reinforced each other’s extremism, the Radical Right and jihadist Islam are also inadvertently reinforcing each other’s polarizing agendas.

What does this Radical Right/jihadist Islam symbiosis mean? Does it pose an existential threat to liberal democracy and global stability, as Communism and Nazism did in the past century? Or, to put it directly, could it morph into or generate a new totalitarianism, which could even coalesce into a global totalitarian order? I believe, and strongly, that such an outcome is not implausible.

First of all, not only do we have a thoroughly interconnected and interdependent global economy—social media connects people globally, which allows them to speak with one voice. Now imagine a catastrophic global economic collapse against a background of social unrest, radical jihadist and anarchist violence, hordes of extremists inflaming passions and speeches, blogs or tweets of demagogues going viral; and new totalitarianisms become conceivable. As a matter of fact, democracy has been in retreat worldwide. This drift toward authoritarianism brings to mind Christ’s words, “If people do these things when the tree is green, what will happen when it is dry?” (Luke 23:31, NIV).*

Indeed, what will happen if the economic springs run dry? Social and political stability, as we know, are inseparably linked to economic prosperity. Subtract them, and “mere anarchy is loosed upon the world,” to cite the famous line from William Butler Yeats’s poem “The Second Coming.” In such anarchy, “the best lack all conviction, while the worst/Are full of passionate intensity.”2 From this passionate intensity emerges the totalitarian impulse. By their very nature, passions are deaf to reason and blind to limits or distinctions. They overwhelm everything in a frenetic yet futile endeavor to piece together fragments of shattered life.

This is what happened in Germany in the 1920s. Following World War I and in the wake of the Great Depression, as their lives were battered by inflation and scared by the unprecedented unemployment that began in 1930, and by a political system that appeared to have failed, Germans were seduced by Hitler’s promise of charismatic liberation, of national rebirth and unity. He “appeared to many as some kind of redeemer. He himself used Christian rhetoric unceasingly.”3 His appeal was chiefly aimed at the emotions, to forge people into a mass. Describing one of his mass rallies in Mein Kampf, he wrote, “After my speech lasting three hours adherents and adversaries fused into a single enthusiastic mass.”4

The ideas of Mein Kampf, as George L. Mosse noted, were translated into liturgical forms to become mass rites of national, Aryan worship. And he added that “to term such dissemination ‘propaganda’ is singularly inappropriate here, for it denotes something artificially created. . . . This is to misunderstand the organic development of the Nazi cult and its essentially religious nature.”5 This applies likewise to Fascism, which, as Mussolini explicitly put it, “is a religious conception of life . . . which transcends any individual and raises him to the status of an initiated member of a spiritual society.”6

Curiously, notwithstanding these religious avowals and not to mention the documented occult roots of Nazism, historians have tended to ignore the religious essence of Nazism and Fascism. Even those who appreciate the religious essence do not pursue their analysis to the point where the “reality” behind the Nazi/Fascist religious proclamations, symbols, and rituals becomes visible. And they are restricted by the assumptions of scientism, the materialistic dogma that all “reality” that is not accessible by methods of natural sciences does not exist or it’s “an illusion,” as Freud famously put it.

This denial of spiritual reality and reduction of the field of human experience to observable phenomena has its origin in the French Enlightenment. Its main thrust was hostility to Christianity and belief in the sovereignty of reason over all spheres of life. Although this rationalism, buttressed by Darwinism, is still the basis of Western secularism, it spawned a deeply spiritual countermovement—Romanticism—that was sharply opposed to scientific rationalism and whose goal was nothing less than reenchantment of the Newtonian mechanical universe, filling it with magic, spirits, gods, and mystery. Significantly, Romanticism set all the key themes of modern literature, music, art, drama, pornography, secular theology, and also of Idealism, Hegelianism, Marxism, Nietzscheanism, and Nazism.

The Romantic reaction, its pungent spiritualism, is a compelling disproof of the materialistic assumptions of scientism. Even more compelling is the transformation of scientism into a religion by the Positivists: Saint Simon and his protégé Auguste Comte. “In many of his writings, Saint Simon demanded that the scientists organize themselves along the lines of the Catholic clergy. . . . He even suggested that they elect a scientific pope, employ excommunication for the crimes against the ideology and institute a “Newtonian” form of baptism.”7 Taking also Catholicism as his model, Comte, who invented sociology as a discipline, devised the “Religion of Humanity,” complete with detailed daily ritual observances.

These religious parodies or more precisely secularization of Christian doctrines by modern ideology tend to be ignored or depreciated by secularists. But they involuntarily testify to the survival of the spiritual in secular modernity. In other words, the modern world is not as secularized or disenchanted as commonly believed. And Max Weber, the great sociologist of modernization, was keenly aware of the vulnerability of our rationalized-disenchanted world. He dreaded the old pagan gods, feared their reappearance in new forms. In an unremarked passage in his famous essay “Science as Vocation” he wrote, “We live as did the ancients when their world was not yet disenchanted of its gods and demons, only we live in a different sense. As the Hellenic person at times sacrificed to Aphrodite and at other times
to Apollo, and . . . as everybody sacrificed to the gods of the city, so do we still nowadays, only our bearing has been disenchanted.”

The crux here is that Weber did not deny spiritual reality. For him, gods and demons still existed; the difference is that “our bearing,” or consciousness, has been disenchanted. Or, in Charles Taylor’s words, our sense of self is no longer “open and porous and vulnerable to a world of spirits and powers.”8 Since “disenchantment” is not a characteristic of the world, but a description of our subjective-rationalized stance toward it, Weber stated that “fate, and certainly not ‘science,’ holds sway over these gods and their struggles”; and added: “the great and vital problem that is contained therein is . . . very far from being concluded.”

And then he gave this bleak warning: “Many old gods ascend from their graves; they are disenchanted and hence take the form of impersonal forces. They strive to gain power over our lives.”9 That is why he emphasized the “limits of science” and excoriated “academic prophets” who claimed natural sciences could “teach us anything about the meaning of the world,” and sought “intellectually to construe new religions without a new and genuine prophecy.” That, he warned, “will create only fanatical sects.” Significantly, Weber concluded “Science as Vocation” by quoting Isaiah 21:11, 12, as counsel “for the many who today tarry for new prophets and saviors.”10

The warning recalls Jesus’ prophetic discourse in Matthew 24; and it’s particularly significant because it runs against the German philosophical tradition, which rejected Christianity, even as it secularized its narratives, especially the Apocalypse, substituting God and the devil with abstract concepts and human agency. Tellingly, as Nietzsche remarked with his characteristic candor, “In the Christian terms, the devil is the prince of the world, and the lord of progress and consequence. . . . And so will it remain, however ill it may sound today in ears accustomed to canonise such power. . . . The world has become skilled at giving new names to things and even baptizing the devil. It is truly an hour of great danger.”11

Indeed, because “giving new names to things” does not change their essence, reality remains what it is. Yet, to be sure, when names and symbols are changed, not only is the reality behind them obscured—a counterfeit one is generated. To be precise, Romanticism’s secularization of the Apocalypse reversed its symbols to produce “a demonically driven apocalypse.”12 This reversal is explicit in Hitler’s declaration in Mein Kampf: “I am acting in accordance with the will of the Almighty Creator: by defending myself against the Jew, I am fighting for the work of the Lord.” And again: “Two worlds face one another—the men of God and men of Satan! The Jew is the anti-man, the creature of another god.”13

Ron Rosenbaum, interviewing prominent Hitler’s biographers for his best-selling book Explaining Hitler: The Search for the Origins of Evil, was very surprised by “the pronounced reluctance of so many of them to call Adolf Hitler evil.” The reluctance, he said, “exposes the imprecision of our thinking on the subject of evil.”14 The imprecision, I would retort, exposes the abject failure of modern philosophy and the social sciences to furnish a new moral framework in place of the rejected Christian one. This abject failure and resultant moral blindness is what prevented political science from recognizing the “kind of tyranny that surpassed the boldest imagination.”

But are we not also blind? As the vast majority enjoys less and less the material benefits of globalization its fears, paranoia and hatreds are congealing into irrational worlds that are completely detached from reality, impervious to reason and downright mythical, in the deepest sense of the word. Yet scientism still controls the Western worldview, still obstructs our view of the spiritual freight behind the pungent passions of jihadist Islam and the Radical Right. Indeed, if all global problems intimate total catastrophe, totalitarian solutions are likely.

Tellingly, the word “apocalyptic” is now omnipresent in our political and cultural discourse, yet its biblical origin is largely unknown. “It is truly an hour of great danger,” to use Nietzsche’s words again. For what the Apocalypse reveals, as Weber warned, are demonic forces striving to “gain power over our lives.” Or put precisely, beneath current global crises, “agencies of evil are combing their forces and consolidating. They are strengthening for the last great crisis.”15 Unless we avail ourselves of the “revelation” of the Apocalypse, we are slouching toward demonic totalitarianism.

5 George L. Mosse, The Nationalization of the Masses: Political Symbolism and Mass Movements in Germany From the Napoleonic Wars Through the Third Reich (Ithaca, N.Y.: Cornell University Press, 1975), p. 10.

7 Peyton V. Lyon, “Saint-Simon and the Origins of Scientism and Historicism,” Canadian Journal of Economics and Political Science 27, no. 1 (February, 1961): 62.