Special Pleading for the Persecuted 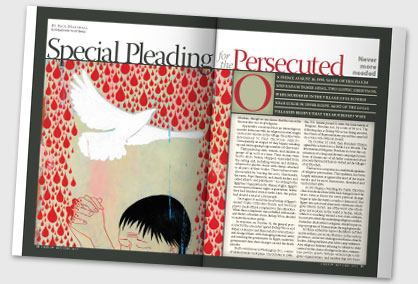 On Friday, August 14, 1998, Samir Oweida Hakim and Kamer Tamer Arsal, two Coptic Christians, were murdered in the village of el-Kosheh near Luxor in Upper Egypt. Most of the local villagers believe that the muderers were Muslims, though no one claims that the reason for the murders was itself religious.

Apparently concerned that an interreligious murder (even one with no religious motive) might cause more tension in the village, the police were determined to find Christian culprits. Consequently on August 15 they began rounding up and interrogating large numbers of Christians.

They picked up men, women, and children in groups of up to 50 at a time. Their victims were tied to doors, beaten, whipped, suspended from the ceiling and, including women and children, subjected to electric shock with clamps attached to all parts of their bodies. Those tortured were also insulted by "cursing the cross, Christianity, the saints, Pope Shenouda, and church leaders, and called atheists and polytheists." According to the Egyptian Organization for Human Rights, Egypt's most respected human rights organization, before they had finished several weeks later, the police had abused a total of 1,200 people.

On August 19 and 20 the local bishop of Egypt's ancient Coptic Orthodox Church, and two local priests, made official complaints to the authorities. When these complaints were rebuffed with insults and threats of further abuse, Bishop Wissa decided to make the matter public.

In response, on October 10, the general prosecutor for the area interrogated Bishop Wissa and Fathers Antonios and Shenouda for several hours and charged them with damaging national unity and insulting the government. In Egypt, under the government then, these charges carried the death penalty.

Half a world away in Washington, D.C., a series of related events took place. On October 9, 1998, the U.S. Senate passed S-1868, the International Religious Freedom Act, by a vote of 98 to 0. The following day, as Bishop Wissa was being arrested, the House of Representatives passed the same bill on a voice vote without dissent.

On October 27, 1998, then President Clinton signed the act into law as Public Law 105-292. The International Religious Freedom Act was the culmination of a long and fervent campaign by millions of Americans of all faiths concerned about precisely the kind of horrors visited on the villagers of el-Khosheh.

The law was a response to a worldwide epidemic of religious persecution. This epidemic has been largely unknown or ignored by most of our major media and by most Americans, churched and unchurched alike.

As 2011 began, a bombing of a Coptic Christian church indicated how little had changed over the years, even as forces for overt political change began to take the streets as early as January 25. But Egypt does not stand alone in its violations of religious liberty. In fact, one of the worst sites of religious persecution in the world is Sudan, which, while it is reaching toward a two-state solution, has not yet solved the underlying religious conflict. Sudan has dealt with its religious divide by pursuing a program of Islamization through genocide.

During my 1997 fact-finding trip to China, 85 house-church Christians were arrested in two dragnet operations on May 14 in Zhoukou. Christians reported brutal beatings resulting in paralysis, coma, and death. Other methods of torture reported include binding detainees in excruciating positions; hanging them from their limbs; tormenting them with electric cattle prods, electric drills, and other implements; and crushing the ankles of victims while they are forced to kneel.

Apart from religious harassment in the remaining Communist countries, there are now intensifying attacks on all religious minorities throughout the Islamic belt, from Morocco on the Atlantic eastward through to the southern Philippines. While Islam has often been more tolerant than Christianity and countries such as Jordan and Kuwait remain so, in many areas this tolerance has collapsed. In Saudi Arabia any non-Islamic or dissident Islamic religious expression is forbidden. Christian meetings are outlawed; and worship services held anywhere other than in the embassies of powerful countries will likely be raided by the mutawa, the religious police, and members imprisoned. Any Saudi who seeks to leave Islam faces the real prospect of death. In countries such as Mauritania, the Comoros Islands, and Sudan, this threat is not only from vigilantes, but part of the legal code itself.

In Iran and Pakistan the threat comes from vigilantes with greater or lesser complicity by the government. In Iran there are strong indications that, besides the ongoing persecution and murder of the Baha'i, government death squads have also abetted the torture and assassination of Protestant leaders in recent years.
Elsewhere the agent of repression is mob violence, often prompted by radical Islamicist leaders. It is widespread in Nigeria, Liberia, Ghana, and the Philippines. In Pakistan in 1997 one Christian town, Shanti Nagar (population 20,000), was razed to the ground. In Indonesia, which has long been a place of toleration between Muslims, Christians and other minorities, there is a rapidly growing epidemic of church burnings, and attacks on Christian and moderate Muslim leaders. There are also direct attacks on religious minorities by radical Islamic terrorists in Algeria, the Philippines, Turkey, and Egypt.

In non-Islamic societies there is violence and discrimination against minority religious groups in Mongolia, Nepal, Sri Lanka, India, Bhutan, and in the central Asian republics that were formerly part of the Soviet Union, especially Uzbekistan. It is a growing phenomenon in Myanmar in the State Law and Order Restoration Council's war against tribal minorities, especially the Rohingya Muslims in the west and the Karen and other tribes in the eastern part of the country, where Christians constitute a large proportion of the minorities.

There is also widespread religious discrimination through legal control. India has affirmative action laws to ease the plight of the dalit, or "untouchables." But while groups such as Hindus, Sikhs, and Buddhists are included, Christian untouchables (a majority of India's 28 million Christians) have been explicitly excluded.

Discrimination is an increasing pattern in Russia, where repressive religion laws, backed by the Russian Orthodox Church, have been instituted at the federal level. Such laws are also widespread, and usually even more repressive, at the local level. There is increasing violence against religious minorities, including Jews, Protestants, Catholics, and dissident Orthodox groups. Similar patterns of discrimination against minority religious groups are pervasive in the Ukraine, Bulgaria, and Romania; present in many parts of Eastern Europe, including the Baltics, and growing in many of the CIS states.

You won't learn much of this from our media. While there is now some attention to U.S. campaigns about persecution, the horror itself is still virtually absent from our news pages. For all the coverage of debates on China's most favored nation trading status, there has been almost no attention to what goes on in China itself. The same pattern holds elsewhere.

As Edward Luttwak has noted: "Policymakers, diplomats, journalists, and scholars who are ready to overinterpret economic causality, who are apt to dissect social differentiations ever more finely, and who will minutely categorize political affiliations, are still in the habit of disregarding the role of religion. . . in explaining politics and even in reporting their concrete modalities."*

Even when religious events are reported, they tend to be redefined according to America's obsession with things "ethnic." When in 1997 Malaysian prime minister Mahathir Mohamad railed against speculators, "We are Muslims, and the Jews are not happy to see the Muslims progress," the Los Angeles Times described him as "race-obsessed." In Yugoslavia war between Orthodox, Catholics, and Muslims was routinely described as "ethnic." The Economist headlined a story in January 1997 about attacks on 25 churches and a temple in east Java after a Muslim heresy trial as "race riots."

Thankfully, this ignorance of religious persecution is now passing. As A. M. Rosenthal, columnist, and a former executive editor of the New York Times, put it in his December 30, 1997, column: "Early this year I realized that in decades of reporting, writing or assigning stories on human rights, I rarely touched on one of the most important. Political human rights, legal, civil, and press rights, emphatically often; but the right to worship where or how God or conscience leads, almost never."

The International Religious Freedom Act was an attempt to entrench a concern for international religious freedom within American foreign policy and to provide a variety of tools for addressing it. The act:

The media has often portrayed the act as a creature of the Religious Right. However, it in fact drew support from a bipartisan group of legislators, and widely diverse groups such as the Southern Baptists, the Episcopal Church, the Dalai Lama, the Anti-Defamation League, the National Jewish Coalition, New York Times columnist A. M. Rosenthal, the Catholic Bishops Conference, Gary Bauer, and the Christian Coalition.

Other critics continue to maintain that such legislation "privileges" religious freedom above other human rights concerns. New York Times columnist Anthony Lewis opined back on September 12, 1997, that such legislation tells "other governments that we care less about such things as genocide, political repression, and racial persecution. It would also tell the world that we now favor a hierarchy. . . of fundamental rights." And he appeared ready to put political activists on top of the list, since for him politics seems to be more important than religion.

Kenneth Roth, then executive director of Human Rights Watch, once called a focus on religious persecution "special pleading" and "an effort to privilege certain classes of victims." But, as The New Republic's Jacob Heilbrunn responded: "This seems a remarkable attitude for a human rights activist, since, by definition, all arguments on behalf of all persecuted groups—racial minorities, political minorities, ethnic minorities, etc.—are 'special pleadings' intended to 'help certain classes of victims.'" And such concerns have not stopped the Human Rights Watch from its own priority list of "special initiatives," including "drugs and human rights" and "lesbian and gay rights."

Historically, religious freedom was the first international human right—it was enshrined in treaties ending the sixteenth- and seventeenth-century European wars of religion. It is the very first right in the First Amendment to the U.S. Constitution. Yet in recent years it has been neglected in foreign policy and in international human rights concerns.

Paul Marshall wrote this when he was a senior fellow at the Center for Religious Freedom, Freedom House, Washington, D.C. In view of recent events in Egypt and elsewhere, his championing of the persecuted is even more pertinent.