Alan J. Reinach July/August 2006
In his book So Help Me God former chief justice of the Alabama Supreme Court Roy Moore, the "Ten Commandments judge," asks: "Can the State Acknowledge God?" Actually, Moore's Ten Commandments crusade is premised on a closely related question: whether the state has an obligation under the first of the Ten Commandments to acknowledge God. Whatever opinion one may have formed of justice Moore, he has raised an important question that implicates both theology and politics: do the Ten Commandments provide moral or spiritual obligations for both governments and individuals? If the state is under a religious obligation to acknowledge God, then perhaps Moore is correct in his crusade to use a visible symbol of God's law to represent a public acknowledgment of God. Whether the state has such a religious obligation cannot be answered without first understanding the first commandment itself. The Jewish and Christian traditions differ in their numbering with respect to this commandment. To the Jews, the first commandment states: "I am the Lord your God who has brought you out of the land of Egypt, out of the house of bondage." It ends there. The Christian version begins where the Jewish second commandment begins: "Thou shall have no other gods before Me."

The Jewish version commands belief in God, first and foremost, and by extension, the acknowledgment of the sovereignty of God. The Christian version emphasizes the requirement that God alone be worshipped. According to one commentary: "Mere belief alone will not do, nor even the acknowledgment that He is the one and only God. We owe wholehearted allegiance and devotion to Him as a personal Being whom it is our privilege to know, to love, and trust, and with whom we may have blessed fellowship."

It appears that the commandment actually requires far more than the sort of public acknowledgment that Roy Moore has been crusading for; it requires things that an impersonal state is not capable of performing. No state can have a personal relationship with a deity. No state can know, love, or trust God. A state cannot experience devotion or worship. However, this does not necessarily make it inappropriate for the state to acknowledge the existence of the Creator, or His sovereignty.

Actually, America has long acknowledged the sovereignty of God. In the Declaration of Independence our Founding Fathers referenced the Creator as the source of our inalienable rights. Later, those rights were given explicit protection in the Bill of Rights, including the right to be free of governmentally established religion. This right was eventually preserved in each state constitution, as well as in the First Amendment.1 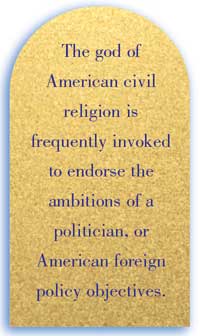 American civil religion is predicated upon an ancient vision of America as a shining city upon a hill, a nation specially chosen by God to carry out His will in the earth. This vision dates back to the earliest of Puritan immigrations, and is rooted in Calvinist theology of chosenness.

The Puritans had scarcely established a foothold in New England when they encountered a heretical rival in Roger Williams. Williams was himself a Calvinist and a separatist who expressed considerable jealousy for the purity of the church. Williams rejected the prevailing sentiment that the state should use the sword to punish heresy, instead insisting that one's religious opinions were irrelevant to one's standing as a member of the civil society. Williams founded the colony of Rhode Island on the principle of separation of church and state. He would vigorously debate the errors of the Quakers, for example, while granting them full rights as citizens. By contrast, Quakers were alternately hanged or expelled from Puritan New England.


Historians are uncertain to what extent Williams' views were influenced by the radical reformation in Europe. There is a clear line of logic, however, between the Protest of the Princes at Speyer in 1529, Williams' Rhode Island, and the Bill of Rights. In 1529 the German Princes refused to compromise on the liberty of preaching the gospel, insisting that "in matters of conscience, the majority has no power." This principled defense of individual conscience gave way before the terrifying multiplicity of religious sects, and the continued threat of imperial armies. Protestant Europe quickly conceded that the religion of the people should be that of the ruler, and religious dissent was just as vigorously suppressed by Protestants as by Catholics.

More than a century later, the Puritan vision still competed for dominance in the formation of the Constitution. Religious establishments did not yield without a fight, and without their defenders. The church had always enjoyed official state sponsorship and support, and many were understandably uncertain as to how the church would fare without it. Eventually, not only the Federal government, but each of the states disestablished their churches. Colonial religious laws were repealed. These laws compelled church attendance, forbade work on Sunday, and criminalized blasphemy. With the repeal of these laws Roger Williams' conception of the role of civil government prevailed. Government would be restricted to civil matters, and would not criminalize religious beliefs, no matter how unorthodox, or conduct that was purely antireligious.

Williams' views are represented as equally by the free exercise clause as by the nonestablishment clause of the First Amendment. The free exercise clause, almost by definition, requires that there be no religious establishments. If the right of individual conscience is to be respected regarding not only belief_—exercise is conduct, not belief—then the state cannot throw its weight behind any particular beliefs or practices.

Roy Moore is at heart a modern Puritan who rejects the American experiment in religious freedom. The logic of requiring the state to observe the obligations of the first commandment is that the state must also, therefore, faithfully uphold the second, third, and fourth commandments, as well. This would mean a revival of laws against heresy, blasphemy, idolatry, and Sabbath-breaking. Moore's Puritan vision has found its advocates in virtually every generation in American life, both in the religious and the political world. The notion that America is chosen by God, a special nation, has had great appeal, and provided much comfort. It is also quite dangerous, especially to those on the receiving end of American ambition, whether Native Americans resisting the western expansion, or Islamic fundamentalists confounding American Christian religion with economic and cultural imperialism. 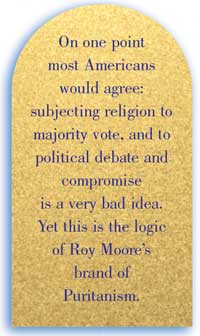 Roger Williams' vision of the civil society protecting all people, regardless of religious belief, is the one that has prevailed in American law and culture. In this vision the government not only has no obligation to publicly acknowledge God; it has no authority to do so. Yet this does not make the nation godless. It requires that godliness be an attribute of the people, rather than being fostered by the state.

"Roy's Rock" was a two-ton slab of granite engraved with an abridged text of the Ten Commandments. The numbering was distinctly Protestant, differing from both Catholic and Jewish renditions. This highlights the difficulty of approving Moore's agenda, and the inherent problem in American civil religion. Civil religion is of the lowest common denominator variety, so that it will have universal appeal. Yet this also deprives it of any meaningful substance. Moore seeks to acknowledge God in a manner that is distinctly Protestant, displaying a Protestant version of the Ten Commandments. This insinuates the state into a theological competition as to which version of the commandments it will approve, authorize, honor, and display. Clearly, such a debate is foreign to the American legal tradition, where courts scrupulously avoid religious questions. Nor should our political institutions be asked to consider such religious questions.

Roy Moore took it upon himself to answer the question "Whose version of the commandments should be displayed?" He did so as a government official. Although in his book he repeatedly confounds the personal right to acknowledge God with his official duties and authority as a state supreme court justice, at no time was he deprived of his freedom to acknowledge God personally. What the federal courts ruled out-of-bounds was his usurping governmental authority to perform a religious function.

Can the state acknowledge God? The practical answer is that in America, we do so as part of our tradition of civil religion, in the most generic form possible. We also do so in recognizing that our individual rights derive from God, not from the state. Must the state obey the first commandment? To this question, the answer must emphatically be negative, for if the state is obligated under the first table of the law, then our political institutions will be compelled to debate issues of idolatry, heresy, blasphemy, and religious observances that inhere to a day of worship.

On one point most Americans would agree: subjecting religion to majority vote, and to political debate and compromise is a very bad idea. Yet this is the logic of Roy Moore's brand of Puritanism.

Alan J. Reinach is the president of the North American Religious Liberty Association-West. HE writes from Thousand Oaks,California.


1 Notwithstanding Justice Clarence Thomas' argument that the states should have the right, under the First Amendment, to establish religion, every state constitution already prohibits such state religious establishments, most of them in language more restrictive than that of the First Amendment.
2 The Reformed Christian teaching regarding predestination lends itself to the idea of political chosenness, since it espouses a spiritual chosenness. The few are chosen for salvation, while the many are condemned to eternal torture, according to God's will.
3 The Puritan Sabbath, of course, was Sunday, while many others have held to the biblical Sabbath, from sundown Friday to sundown Saturday.