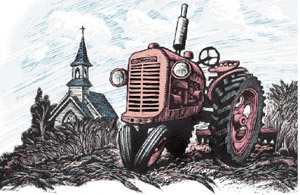 Sunday laws have been a part of the legal landscape of America from the time of European settlement. Nevertheless, because Sunday laws are not generally at the forefront of today's legislative debates and, as currently enforced, create only occasional serious difficulties, their pervasive presence is ignored. However, these laws should be neither dismissed nor treated lightly. Sunday laws are religious in origin and purpose, and they create a burden on the religious practices of those whose faith dictates that they rest on a day other than Sunday.

Some Sunday laws merely restrict the hours of certain activities, while other laws prohibit select activities altogether. For example, most states restrict only the hours of alcoholic beverage sales on Sunday and do not totally prohibit their sale. In Delaware video lottery machines cannot be operated between the hours of 2:00 a.m. and 1:00 p.m. on Sundays. In contrast, shooting, hunting, card playing, and racing are prohibited altogether on Sundays in Alabama.1 In Rhode Island motor vehicle dealers are absolutely prohibited from opening for business on Sunday.2


At first glance these restrictions may seem irrelevant to our religious liberty. Some of these laws are time-honored traditions whose presence is not even recognized. Moreover, complying with these laws imposes only a minimal burden. The closing of banks and government offices on Sundays is an example of a culturally accepted norm that does not place a huge inconvenience on most of society. Americans are so accustomed to having banks and government offices closed on Sundays that it is second nature to govern our schedules accordingly. Other Sunday laws may appear harmless because we assume that they are mere historical relics that remain on the statutory books, but that would never be enforced. In addition, some Sunday laws were enacted through the efforts of labor unions and do not have religious undertones.

However, Sunday laws do pose a real threat to religious liberty. The rationale behind these restrictions is hardly innocuous; they are designed to create an atmosphere of worship and have their heritage in the protection of Sunday as a day of worship. Some states recognize this purpose in a more explicit manner than others. For example, such states as Nebraska, Minnesota, and New York openly refer to Sunday as "the Sabbath" in their state law. Massachusetts law calls Sunday the "Lord's Day," while New Hampshire refers to Sunday laws as "Day of Rest" statutes. According to New York law, "The first day of the week being by general consent set apart for rest and religious uses, the law prohibits the doing on that day of certain acts hereinafter specified, which are serious interruptions of the repose and religious liberty of the community."5

Furthermore, many of these laws place a burden on individuals whose faith dictates that they observe a day other than Sunday. Statutes that forbid labor or the opening of business on Sunday impose a serious economic burden on those who observe Saturday as their Sabbath. Because their conscience dictates that they refrain from business on Saturday, while the law mandates that they refrain from business on Sunday, Saturday observers lose two business days, as opposed to the one business day that their counterpart Sunday observers lose. As a result, Saturday observers are forced to choose between economic loss and adherence to their religious convictions.

It may appear that the state and federal constitutional protections that guarantee the freedom of religion, freedom from state-imposed religion, and the equal protection of all citizens would invalidate Sunday laws if they imposed a burden on individuals whose religious faith dictates that they observe another day besides Sunday. Unfortunately, this is not the case. The U.S. Supreme Court has upheld Sunday laws against constitutional challenges,6 and state courts have followed their lead. Eleven states have held that Sunday closing laws do not violate the separation of church and state or interfere with religious liberty. A number of state courts have ruled that Sunday laws do not violate equal protection or due process rights. Indeed, many state courts have stipulated that it is appropriate for states to impose Sunday restrictions for the purpose of promoting public health, safety, general welfare, and morals.

Factors That Mitigate the Impact of Sunday Laws


There are provisions that mitigate the impact of Sunday laws on Saturday Sabbath observers. Eleven states have statutes that explicitly exempt those who observe Saturday as their Sabbath from Sunday closing laws. These laws provide that those who conscientiously believe that the seventh day of the week ought to be observed as Sabbath and who actually refrain from labor and business on that day will not be liable for prosecution for performing labor or business on Sunday. Unfortunately, while these statutes provide some protection for Saturday observers, they have no effect on the statutes that were enacted to create an atmosphere of worship on Sunday. For example, it is doubtful that these statutes would exempt a Sabbath observer from a statute that forbids fishing on Sunday. Nevertheless, fishing is most likely forbidden on Sunday to foster an atmosphere of worship on this day.

There are also limitations on Sunday laws. North Carolina, for example, requires a public hearing to take place before a Sunday closing ordinance is enacted. Some of the existing restrictions on Sunday activities limit Saturday activities as well. This is especially true for statutes that regulate the sale of alcoholic beverages. Also, most Sunday closing laws make exceptions for work of necessity and charity. States that forbid the opening of shops on Sunday usually make allowances for the sale of milk, bread, and medicines.

Many of the Sunday closing laws may not currently be enforced. The plausible reasons for nonenforcement are manifold. In many circumstances it is not economically advantageous to enforce Sunday closing laws. This is particularly true because American companies compete in the global market and because the costs of closing production lines a day a week may be prohibitive in some industries. In addition, there appears to be weak popular support for the strict enforcement of Sunday laws. Some closing provisions may not be enforced because they are viewed as antiquated. Some provisions may be so obscure that they are not enforced. Finally, law enforcement may have other enforcement priorities (e.g., reducing violent crime).

In conclusion, Sunday laws remain ubiquitous in America. They do not generally create a major burden on non-Sunday worshipers as they are currently enforced. Nevertheless, their continued existence, along with case law upholding their constitutionality, establishes the principle that the majority can impose its day of worship on religious minorities. Such a principle is antithetical to religious freedom. While public sentiment may not currently support the enforcement or expansion of Sunday laws, it is clear that such sentiment can change rapidly. In the face of such a change the legal stage is set for the enforcement and expansion of Sunday laws. These laws, therefore, are not merely historical oddities, but dangerous precedents that pose a real threat to our future religious liberty.