Haven Bradford Gow January/February 2006
An editorial in the February 24, 2004, News-Star, Monroe, Louisiana, pointed out that the Monroe School Board has voted unanimously to introduce elective Bible classes for eighth-grade students beginning this fall. Fourteen school systems in Louisiana and 153 across the nation already offer Bible as history and/or literature courses. 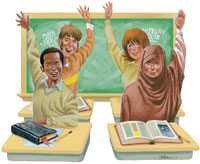 According to the News-Star editorial, the Monroe school system's Bible classes must adhere to these constitutionally affirmed and protected guidelines: The school's approach must be academic rather than devotional; the goal must be student awareness and appreciation of the world's great religions, and not acceptance of any particular religion; the emphasis must be on study and not practice of religion; there must not be promotion or denigration of any religion.

Concerning the positive impact that religion can and does have on the thinking and behavior of young persons, Dr. Thomas Lickona, professor of education at State University of New York at Cortland, tells us in his new book Character Matters (Simon and Schuster) that "for a great many persons, religion gives life a higher purpose and an ultimate reason for leading a moral life: God expects it." As Dr. Lickona notes, several studies buttress the contention that religious faith and church attendance help young people develop good character and avoid antisocial activities such as drug and alcohol abuse and premature and irresponsible sex..

Many, though, mistakenly believe U.S. Supreme Court rulings prohibit any consideration or discussion of religion in the public schools; how_ever, as First Amendment scholar and attorney John Whitehead points out in his book The Rights of Religious Persons in Public Education (available from the Rutherford Institute in Virginia): "Fortunately, the United States Supreme Court. . . has held that the government (which includes the public schools) must accommodate religion whenever it is constitu_tionally required. The Court has expressly held that religious speech enjoys the same high First Amendment protection as other speech under the Free Speech Clause in addition to its First Amendment protection under the Free Exercise Clause." Then too, "through the passage of the Equal Access Act, Congress has expressed its view that religious speech must be treated fairly and equally within the public schools. The subse_quent affirmation of the Act by the Supreme Court further undergirds the constitutional guarantee of religious expression."

According to Mathew Staver, a First Amendment scholar and attorney and president of Liberty Counsel in Orlando, Florida, students and teachers need not sacrifice their First Amendment religious freedom rights once they enter a public school building. He observes that, accord_ing to the U.S. Constitution and U.S. Supreme Court decisions, students may engage in religious speech during noninstructional time; may distri_bute religious literature during noninstructional time (without having prior review and acceptance by school officials); may participate in free speech during class as long as the speech is compatible with the topic being studied; may give oral and written reports on religious topics as long as the report or presentation is consistent with the assignment or topic being studied; may establish Bible clubs as long as the school permits at least one other noncurriculum student organization.

Teachers likewise have First Amendment religious freedom rights. As Attorney Staver notes, teachers may exercise the right of free speech and religious freedom; may objectively and neutrally discuss religion as long as the discussion is consistent with the topic being taught; may use school facilities to meet with other school employees for religious purposes and receive equal treatment to that provided teachers for secular purposes; may bring in outside speakers to discuss religious topics or debate religious issues or moral issues from a religious perspective; may serve students as a Bible class sponsor.

Certainly religious students and teachers in the public schools need not be viewed and treated as second-class citizens.