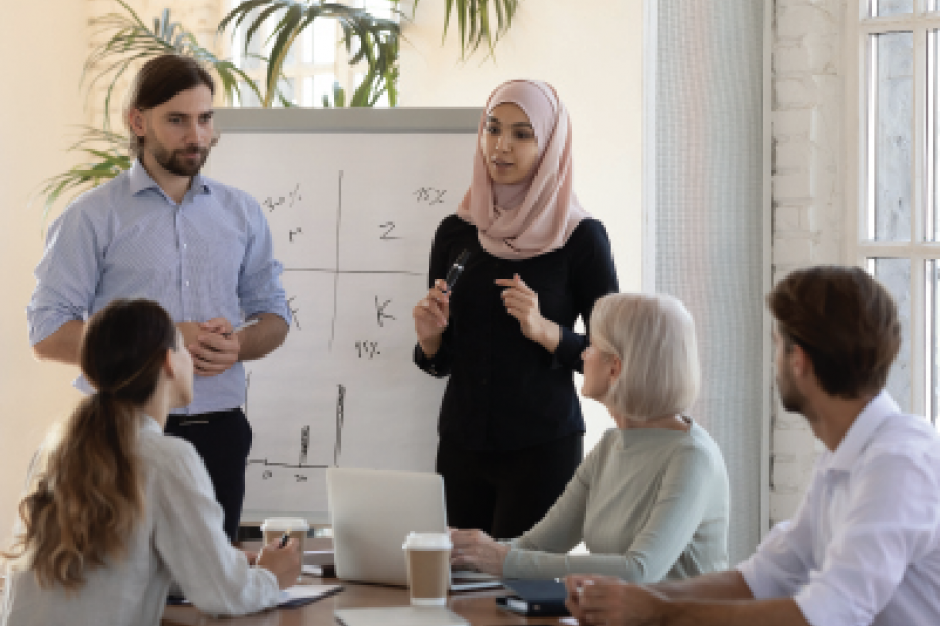 Teaching the (Corporate) World to ‘Sing in Harmony’

Some of America’s top companies have begun to welcome faith into the workplace as part of their overall diversity initiatives. Intel, Alphabet, Tyson Foods, American Airlines, and Texas Instruments are just a few of the international corporations that have created programs in recent years encouraging employees to “bring your whole self, faith and all, to work.”

A central figure in this movement—both in documenting and supporting these efforts—is internationally known social scientist and author Brian Grim, founder and president of the Religious Freedom & Business Foundation. Before establishing the foundation in 2014, Brian was a senior researcher at the Pew Research Center in Washington, D.C., where he directed the largest social science effort ever undertaken to collect and analyze global data on religion. Today he works with governments, Fortune 500 companies, and international organizations such as the United Nations and the European Parliament, advising on the role of faith and religious freedom in promoting human flourishing.

Liberty editor Bettina Krause recently talked with Grim about how promoting a culture of religious diversity and freedom in the workplace pays dividends for both employees and businesses.

Bettina Krause: Religion is sometimes perceived, righty or wrongly, as a potential source of conflict. It seems counterintuitive, then, that a company would want to encourage their employees to express their faith in the workplace.

Brian Grim: This is about letting people be who they are. And, in fact, there are multiple benefits for a company when it opens its doors for people to express their faith and their faith identity. When you have a culture like that, it sends a message that everyone is welcome. And that’s good not just for recruitment but also for retention.

If people of faith feel that their employer doesn’t respect something that’s near and dear to them, they’ll soon be looking for a company that does. For people of faith, it’s offensive to be asked to check your faith at the door when you come in. It’s just like telling a woman to stop being a woman when she comes to work, just be a worker. That’s not how people are hardwired.

And second, a corporate culture that welcomes faith also improves revenue, and that’s an important part of the bottom line of why many companies are opening their doors wide to people of all faiths and beliefs. For some companies there may be a fear of the unknown, a feeling of “OK, let’s keep all that outside the door, because we don’t know what’s going to happen if we let it inside.” But the companies that do this, and do it well and thoughtfully, are having tremendous success.

Many companies have set up different faith groups to be a support for employees—to help them have success in the company. These groups don’t exist so people can promote their religion or substitute what they do at work for what happens at their church, or mosque, or temple, or whatever their faith background is.

Companies are also not trying to find the lowest common religious denominator around which everybody can say, “OK, we can all agree to that.” No, instead they’re saying, “We want you to bring your full Christian self or your full Hindu self or your full atheist self to work, and everyone else will respect that and support your right to live and behave according to your beliefs and vice versa.”

Bettina: Are there potential pitfalls?

Brian: It can go awry when a company doesn’t make clear that these groups are for business purposes or if they don’t create bylaws so the groups all function in the same way. Another potential issue is if there’s any kind of coercion—then, of course, that can backfire. If somebody feels, “Well, if I’m going to get my next promotion, I’d better join this particular group.”

The companies that have these groups encourage all their employees to participate in one or more of the groups. And so you can even have somebody who’s a Christian being part of the atheist group, just to be an ally and say, “Look, we respect your belief too.”

Of course, it’s one thing to encourage everyone to participate, and it’s another when the boss joins a particular group and then, all of a sudden, everybody thinks, Oh, if I’m going to get ahead in this company, that’s the way to go.

So to avoid that challenge, these groups are structured as company sponsored but employee led. It’s not the boss from C-suite leading them, but more rank-and-file employees or midlevel managers. The people at the top, though, act as executive sponsors. For instance, the executive sponsor of the Muslim group at Texas Instruments is not a Muslim, but that person sponsors the group as a way of showing support for Muslim employees. It’s a way of saying, “This may not be my perspective, but I want to be an ally of people who might share a belief that’s different to mine.” So that’s the spirit in which this is done.

Bettina: As you’re talking, I can’t help thinking that this is a model that could have a spillover effect into society at large.

Brian: Yes, absolutely. And that’s actually what my foundation, the Religious Freedom & Business Foundation, is all about. What we’re promoting is a model for how society could work. The secret here is that with a business, you have a product or a service you’re making or providing, and everyone’s on the team. If you want to make a car or provide an internet service or flip hamburgers—whatever your business is—everybody has a stake in the success of the business. If you’re working beside somebody who’s different from you—a different gender, a different race, with different beliefs—that doesn’t really matter. What matters is that you can work together and produce the best product or service possible.

And so, as an American society, is there something that America has that we all want to join in with and produce? It doesn’t matter if we’re a Catholic, Protestant, Muslim, Hindu, atheist, or agnostic; all of us share in an American dream. I think we need to gain this sense that America has something to offer the world that’s unique and wonderful, and that all people can participate in it, regardless of what their politics or their religion might be.

Bettina: You’ve described how corporate faith groups work, but what are some other best practices of a faith-friendly workplace?

Brian: We have an index called the corporate Religious, Equity, Diversity, and Inclusion index, or the REDI index. We track ten different aspects of religious accommodation and inclusion that are good benchmarks for companies. One aspect, for instance, is what companies emphasize in their messaging. If you look at a company’s diversity page, is it all slanted toward one thing? Or does it include religion and other different types of diversity? We also look at whether companies have clear reporting channels for instances of religious discrimination or for requesting a religious accommodation. Do they provide training on religious inclusion and religious diversity?

These benchmarks weren’t things that we came up with alone. It was done in consultation with top Fortune 500 companies, asking people who are working in this space, “What do you think are the important benchmarks?”

Another aspect is whether a company provides chaplain care or other kinds of spiritual support. Just think of the psychological and spiritual challenges that were posed by the pandemic or, before that, by the opioid crisis. Companies such as Tyson Foods have chaplains across all their plants in the United States, and many of them are full-time staff members. As the former head of chaplains, Karen Diefendorf—who was a former military chaplain—says, “Life doesn’t stop when you come through the factory door. Whatever’s going on outside, you bring it right inside the door with you.”

Bettina: As you look ahead, are you optimistic that this idea of building religious freedom through corporate engagement will keep gathering momentum?

Brian: I’m very optimistic. This is not something I’m out trying to sell to companies; they come to me. I’m just shining a light on what’s happening. Top companies, such as American Airlines, Dell Technologies, American Express, and now Google, and many more—they’re doing the work. You could say that it’s a movement in the making. I have my email box open right now, and I have five emails that came in last Friday from different companies asking, “Hey, can you either put us in touch with somebody who’s doing this well, or can we set up a time to talk so we can better understand how we might do this?”

I’m happy to share with anyone, but it’s not my mission to go out and get companies to do this. It’s more of a company-to-company transfer of information and I play a matchmaking role, you could say.

One of our recent interns at the foundation, a young woman, said recently, “This experience has changed my view of how to build religious freedom. I used to think it was just something lawyers would do, and you’d fight it out in the courts. But this is something every single person can do today.”

You can read more about the work of the Religious Freedom & Business Foundation at www.religiousfreedomandbusiness.org. Brian Grim is on Twitter, ﻿@brianjgrim.