The American Government vs. Religion? 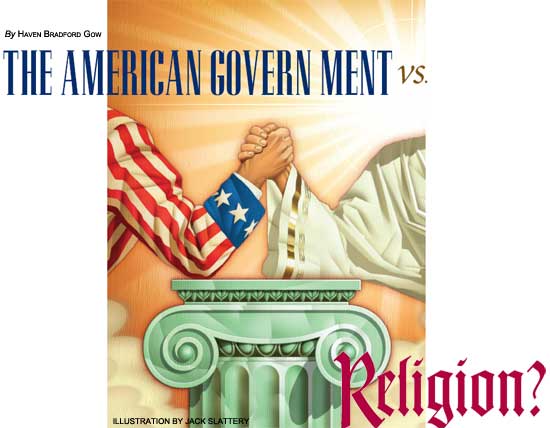 A professor of religion at Texas Christian University, Ronald Flowers wrote in his book That Godless Court (Westminster/John Knox) how "In 1962 and 1963, as a reaction to its decision banning school-sponsored prayer in the public schools, the Supreme Court was frequently called 'godless.' Is that a fair representation of the High Court? Or is it more accurate to say that the Court was then and is now simply trying to maintain neutrality between church and state?"

In his book Rights & Duties (Spence), the late and eminent conservative Christian man of letters Dr. Russell Kirk insists that, contrary to some popular misconception, the Founding Fathers intended the First Amendment clauses pertaining to religion to promote and protect religion and religious freedom. Dr. Kirk observes: "(T) he first clause of the First Amendment never was meant to signify that the American government was indifferent to religions, or hostile toward it. . . . There is not national establishment of religion, but the American government acknowledges the benefits of religion and desires to encourage religious faith."

To buttress his position Dr. Kirk quotes U.S. Supreme Court Justice Joseph Story's comments in his Commentaries on the Constitution (1833): "Probably at the time of the adoption of the Constitution and of the First Amendment. . . the general if not universal sentiment in America was that Christianity ought to receive encouragement from the state so far as was not incompatible with the private rights of conscience and the freedom of religious worship. An attempt to level all religions, and to make it a matter of state policy to hold all in utter indifference, would have created universal disapprobation, if not universal indignation."

Justice Story's sentiments are reflected in the late liberal U.S. Supreme Court Justice William O. Douglas's majority opinion in the 1952 case of Zorach v. Clauson, which is reprinted in Religious Liberty in the Supreme Court, edited by legal scholar Terry Eastland and published by William B. Eerdmans Co.: "We are a religious people whose institutions presuppose a Supreme Being. When the state encourages religious instruction or cooperates with religious authorities by adjusting the schedule of public events to sectarian needs, it follows the best of our traditions. For it then respects the religious nature of our people and accommodates the public service to their spiritual needs. To hold that it may not would be to find in the Constitution a requirement that the government show a callous indifference to religious groups. That would be preferring those who believe in no religion over those who do believe." He added that "we find no constitutional requirement which makes it necessary for government to be hostile to religion and to throw its weight against efforts to widen the effective scope of religious influence."

According to Dr. James Kennedy, senior minister, Coral Ridge Presbyterian Church, Fort Lauderdale, Florida, in word and deed our Founding Fathers demonstrated their belief in and support for the Judeo-Christian foundation of America. He points out that America's Founding Fathers and great presidents taught and tried to live by the principles of the Bible. Dr. Kennedy says this about President George Washington: "George Washington, the great founder of this nation, arose regularly and spent the time from five until six in the morning on his knees before a chair on which lay an open Bible. He retired every evening at nine o'clock to the same study, to the same chair, to the same open Bible."

This is what some other presidents have said about the Bible, the Word of God:

John Adams: "I have made it a practice every year for several years to read through the Bible."

Ulysses S. Grant: "Hold fast to the Bible as the anchor of your liberty; write its precepts in your hearts and practice them in your lives."

Theodore Roosevelt: "If a man is not familiar with the Bible, he has suffered the loss which he had better make all possible haste to correct."

Ronald Reagan: "Inside the Bible's pages lie all the answers to all of the problems man has ever known. . . . It is my firm belief that the enduring values presented in its pages have a great meaning for each of us and for our nation. The Bible can touch our hearts, order our minds, and refresh our souls."

Indeed, America's understanding of religious freedom and its importance is based on belief in and support for God, the teaching of the Bible, and a Judeo-Christian moral and religious foundation.

Haven Gow is a TV and radio commentator and writer who teaches religion to children at Sacred Heart Catholic Church, Greenville, Miss.