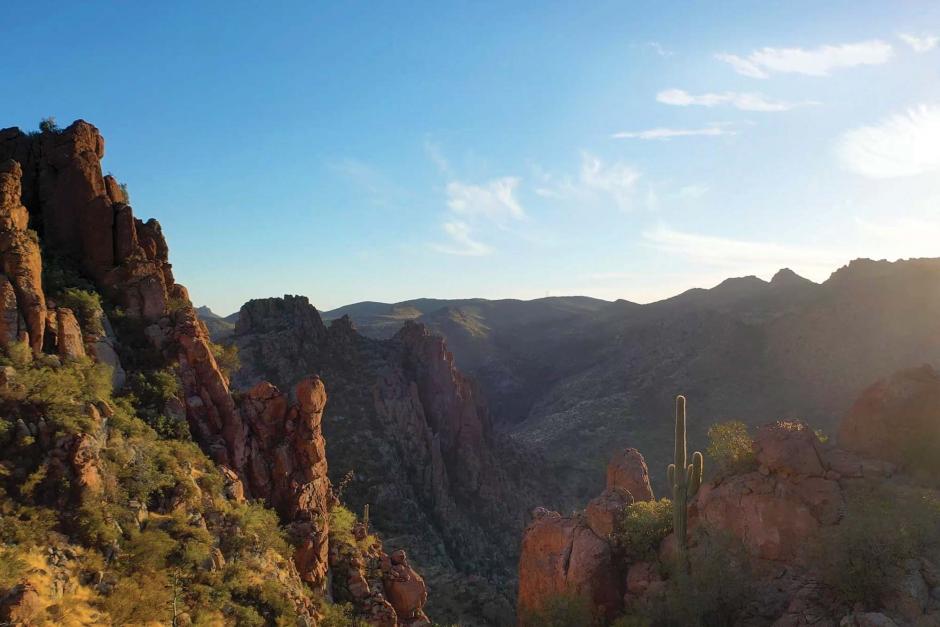 The Battle to Save Oak Flat

Where do you commune with God?

For the San Carlos Apache and some other Western tribes, the answer is Oak Flat, currently part of Tonto National Forest in southeast Arizona. For centuries they have used Oak Flat for religious rituals, cultural ceremonies, burial grounds, and as a place to find medicinal plants, food, and water.

What if your sanctuary was facing total and permanent destruction?

The federal government is poised to sell Oak Flat and the surrounding land to a foreign mining partnership so that the copper deposit underneath it can be mined. If mining under Oak Flat commences, the resulting crater will be nearly two miles wide and up to 1,000 feet deep—or more than the length of the Golden Gate Bridge and deep enough to stack the Statue of Liberty more than three times.

What if your member of Congress told you that what your congregation has to say about the destruction of your sanctuary is less important than how the congregation down the street feels about the plan?

Tribal leaders have been reaching out to their congressional delegations for years to protect Oak Flat. One member of Congress—whose district contains a sizable indigenous population—dismissed the tribal leaders who wanted to discuss the Save Oak Flat Act (H.R. 1884) by saying, “I know where the Natives stand. I need to hear from the non-Natives.”

As a lifelong churchgoer, I love my church. I understand how sacred houses of worship can be for those who gather in them to share religious experiences. As a Baptist Christian in the South, I cannot imagine what it would feel like to have my church sanctuary threatened and—even worse—being told that what I think doesn’t matter as much as what others down the street think. But this is what’s happening right now in the fight to save Oak Flat.

Baptist cofounder Thomas Helwys died in an English prison in 1616 after telling King James (yes, that King James, for whom the KJV Bible is named) that he had no authority over the souls of men and that “heretics, Turks, Jews, or whatsoever” must be free to respond to God as they felt led.

Roger Williams, founder of the First Baptist Church in America, first used the “wall of separation” language when he wrote about the “hedge or wall of separation between the garden of the church and the wilderness of the world.”

Colonial Virginia pastor John Leland rejected the idea that religious toleration was good enough in a young America, writing: “The very idea of toleration is despicable; it supposes that some have a preeminence above the rest to grant indulgence, whereas all should be equally free, Jews, Turks, Pagans and Christians.”

Over the centuries Seventh-day Adventists, whose own historical commitments to religious freedom run deep, and many groups across the theological spectrum have also fought for all people to be equally free to practice their faith. Unfortunately, the circumstances around the Oak Flat case provide a startling reminder that when it comes to defending religious practices, not everyone’s voice is equally heard.

Ironically, even our advocacy efforts to save Oak Flat are framed in the language of White America instead of the indigenous peoples who have the most at stake. We call the land “Oak Flat,” a rough English translation of the Apache name Chi’chil Bildagoteel. Its location is often described as near the town of Superior, Arizona, instead of its relation to the San Carlos reservation. Ignored is the fact that the land is no longer under Apache control because the American government rounded up the Apache and placed them on a reservation without regard for what land might be sacred to them. Since it is an outdoor space not marked by a human-made structure and is also used by outdoor enthusiasts for hiking, camping, and rock climbing, supporters of the mine deride its religious significance because it does not match their idea of a sanctuary.

Supporting someone’s First Amendment rights—including freedom of religion—is not about agreeing with the underlying conduct. One of my favorite movies is The American President from 1995. In it fictional president Andrew Shepherd gives a rousing defense of free speech, saying, “You want free speech? Let’s see you acknowledge a man whose words make your blood boil, who’s standing center stage and advocating at the top of his lungs that which you would spend a lifetime opposing at the top of yours.” Likewise, religious freedom advocacy is not about agreeing with or approving the underlying religion or religious practice. In advocating to save Oak Flat, we don’t dictate the tribes’ religious views and practices any more than they dictate ours. Instead, we’re able to stand with tribal members in our commitment to religious freedom for all as they describe the land’s sacredness and their desire to protect their outdoor sanctuary.

As Christians we support prayer, corporate worship, and the Ten Commandments. However, we also know that a vibrant faith is a voluntary faith, so we oppose government-mandated religion. And while not every religious practice can be accommodated in a pluralistic society, we should apply the same standards for all religions. We should have a thumb on the scale toward accommodating religious practices, especially for those practices that primarily affect the religious adherents themselves and do not cause harm to outsiders. That means being advocates for religious freedom where practices are far different from our own, such as in cases involving animal sacrifice (Church of Lukumi Babalu Aye, Inc., v. City of Hialeah), special access for Native Americans to public land (Wyoming Sawmills Inc., v. U.S. Forest Service [10th Circuit]), or ingesting hoasca tea as a religious sacrament (Gonzales v. O Centro Espírita Beneficiente União do Vegetal).

In the fight to save Oak Flat, supporters of religious freedom have an opportunity to come alongside our indigenous neighbors and stand with them as they fight for their ability to practice their religion. The First Amendment of the U.S. Constitution—“Congress shall make no law respecting an establishment of religion, or prohibiting the free exercise thereof”—enshrines these dual protections into federal law. But it is up to all of us to see that these protections extend equally to all Americans, not just those who worship like us.

Rev. Jennifer Hawks serves as associate general counsel at BJC (Baptist Joint Committee for Religious Liberty), where she provides legal analysis on church-state issues that arise before Congress, the courts and administrative agencies. She is a member of the U.S. Supreme Court, Texas and Mississippi bars.