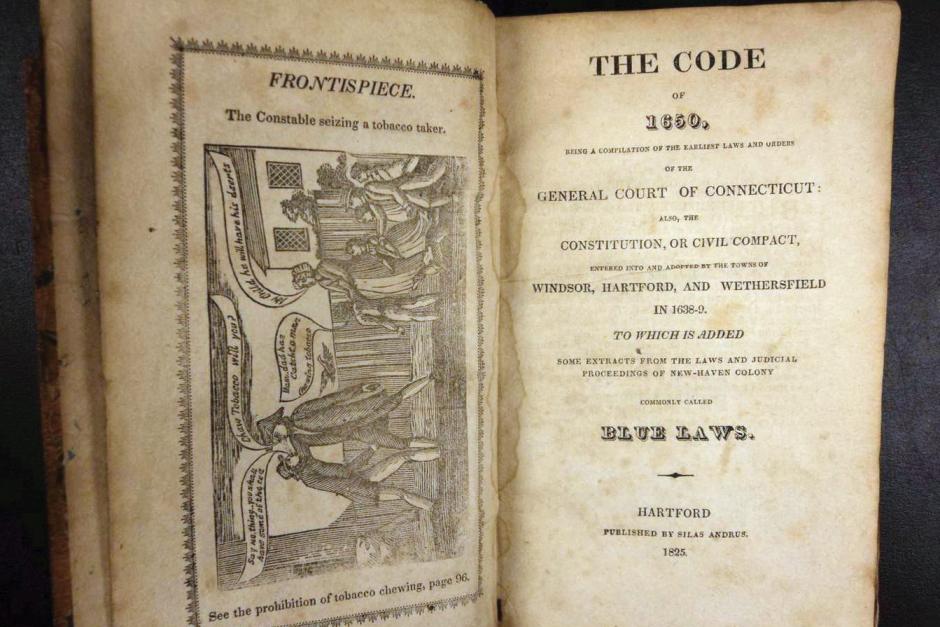 The Beginning of Connecticut’s Blue Laws

A great deal has been said and written pro and con about Connecticut’s “blue laws.” We have just made a thorough investigation of the early records setting forth the statutes as enacted by the original colonies, and we shall publish from time to time these statutes as they really existed in the records. . . . These are not fake statutes, but real laws which were passed and enforced.

Some may think that we ought not to publish them now, as it casts reflection upon our forefathers and upon religion. We do not so hold. We believe that the mistakes which our forefathers made in their zeal to uphold and enforce religious obligations by civil authority ought to be revealed to their posterity today so that we may learn the lesson and not repeat the mistakes of our fathers, which could only result in bringing calumny and reproach upon religion in general.

This article deals with the constitution and certain statutes of a religious character which were adopted by the towns of Windsor, Hartford, and Wethersfield, in 1638, which constituted the beginning of the Connecticut colony. The constitution reads as follows:

“For as much as it hath pleased the Almighty God, by the wise disposition of His divine providence, so to order and dispose of things, that we, the inhabitants and residents of Windsor, Hartford, and Weathersfield, are now cohabiting and dwelling in and upon the river of Connecticut, and the lands thereunto adjoining, and well knowing when a people are gathered together, the word of God requires, that to maintain the peace and union of such a people, there should be an orderly and decent government established according to God, to order and dispose of the affairs of the people at all seasons, as occasion shall require; do therefore associate and conjoin ourselves to be as one public State or Commonwealth; and do for ourselves and our successors; and such as shall be adjoined to us at any time hereafter, enter into combination and confederation together, to maintain and preserve the liberty and purity of the gospel of our Lord Jesus, which we now profess, as also the discipline of the churches, which, according to the truth of the said gospel, is now practiced amongst us; as also in our civil affairs to be guided and governed according to such laws, rules, order, and decrees, as shall be made, ordered, decreed, as shall be made, ordered, and decreed, as followeth:

“1. If any man after legal conviction shall have or worship any other God but the Lord God, he shall be put to death.

“2. If any man or woman be a witch, that is, hath or consulteth with a familiar spirit, they shall be put to death.

“3. If any man shall blaspheme the name of God, the Father, Son, or Holy Ghost, with direct, express, presumptuous, or high-handed blasphemy, or shall curse in the like manner, he shall be put to death.

“Forasmuch,as the open contempt of God’s word and messengers thereof, is the desolating sin of civil states and churches, and that the preaching of the word by those whom God doth send, is the chief ordinary means ordained by God, for the converting, edifying, and saving the souls of the elect, through the presence and the power of the Holy Ghost thereunto promised; and that the ministry of the word is set up by God in His churches for those holy ends; and according to the respect or contempt of the same, and of those whom God hath set apart for His own work and employment, the weal or woe of all Christian States, is much furthered and promoted:

“It is therefore ordered and decreed, That if any Christian, so-called, within this jurisdiction, shall contemptuously bear himself toward the word preached, or the messengers that are called to dispense the same in any congregation, when he does faithfully execute his service, and office therein, according to the will and word of God, either by interrupting him in his preaching, or by charging him falsely with an error, which he hath not taught, in open face of the church, or like a son of Korah, cast upon his true doctrine, or himself, any reproach to the dishonor of the Lord Jesus, who hath sent him, and to the disparagement of that His holy ordinance, and making God’s way contemptible and ridiculous, that every such person or persons, whatsoever censure the church may pass; shall for the first scandal be convented and reproved openly, by the magistrates, at some lecture, and bound to their good behavior: and if a second time, they break forth into the like contemptuous carriages, they shall either pay five pounds to the public treasure, or stand two hours openly upon a block or stool four feet high, upon a lecture day, with a paper fixed on his breast written with capital letters, AN OPEN AND OBSTINATE CONTEMNER OF GOD’S HOLY ORDINANCES, that others may fear and be ashamed of breaking out into the like wickedness.

“It is therefore ordered and decreed by this court, and authority thereof, That wheresoever the ministry of the word is established according to the order of the gospel, throughout this jurisdiction, every person shall duly resort and attend thereunto respectively, upon the Lord’s day, and upon such public fast days of thanksgiving as are to be generally kept by the appointment of authority: and if any person within this jurisdiction shall, without just and necessary cause, withdraw himself from hearing the public ministry of the Word, after due means of conviction used, he shall forfeit for his absence, from every such public meeting, five shillings; all such offenses to be heard and determined by any one magistrate, or more, from time to time.

“It is ordered, That the governor, or any other magistrate in this jurisdiction, shall have liberty and power to call forth any person that has been publicly corrected for any misbehavior, to do execution upon any person or persons, by whipping or otherwise; and that at any time hereafter, as occasion does require, and in case of defect or want of such, any other person as he or they shall think meet.

It is ordered by this Court and authority thereof, That if any man shall commit fornication, with any single woman, they shall be punished, either by enjoining to marriage, or fine, or corporal punishment, or all or any of these, as the Court or magistrate shall appoint, most agreeable to the word of God.”

In June 1639, at New Haven, all the free planters assembled together in a general meeting, to consult about settling civil government according to the will of God, and they finally passed the following resolution:

“That Church Members only shall be free Burgesses, and that they only shall choose magistrates and officers among themselves, to have the power of transacting all public civil affairs of this Plantation, of making and repealing laws, dividing of inheritances, deciding of differences that may arise, and doing all things or businesses of like nature.”

The above extracts were taken from “The Code of 1650, Being a Compilation of the Earlier Laws and Orders of the General Court of Connecticut; also the Constitution or Civil Compact Entered into and Adopted by the Towns of Windsor, Harford, and Wethersfield in 1638-39, and Laws of New Haven Colony.”

The Puritans of Connecticut went to great extremes later on in the application of these religious laws, as all former legislative assemblies have done which entered upon a similar course. When a civil government once enters the religious domain to enforce religious obligations as such, it is bound to advance down the road toward its ultimate goal, namely, the Inquisition and the fiery furnace.