The Costs of Free Speech 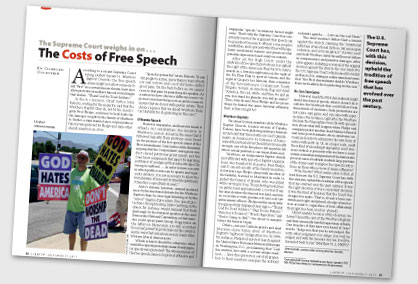 According to a recent Supreme Court ruling (Albert Snyder vs. Westboro Baptist Church), the free speech clause might not allow someone to yell "Fire!" in a crowded movie theater, but it does allow protesters at military funerals to hold signs that declare, "Thank God for Dead Soldiers."

In the 8-1 decision, Chief Justice John Roberts, writing for the majority, said that the Westboro Baptist Church, led by the incorrigible Fred Phelps, could not be held liable for the damages sought by the family of Matthew A. Snyder, a slain marine lance corporal whose funeral was picketed by Phelps and some other church members in 2006.

"Speech is powerful," wrote Roberts. "It can stir people to action, move them to tears of both joy and sorrow, and—as it did here—inflict great pain. On the facts before us, we cannot react to that pain by punishing the speaker. As a nation we have chosen a different course—to protect even hurtful speech on public issues to ensure that we do not stifle public debate. That choice requires that we shield Westboro from tort liability for its picketing in this case."

Offensive Speech
However unpopular, and however much it offends our sensibilities, the decision in Westboro is correct, at least in the sense that it followed logically from previous cases based on the premise of the free speech clause of the First Amendment. Only Justice Alito dissented, arguing that the "respondents' outrageous conduct caused petitioner great injury, and the Court now compounds that injury by depriving petitioner of a judgment that acknowledges the wrong he suffered. . . . In order to have a society in which public issues can be openly and vigorously debated, it is not necessary to allow the brutalization of innocent victims like petitioner. I therefore respectfully dissent."

Alito's dissent, however, seemed motived more by his emotional distaste for the Westboro Baptists than by clear legal thinking or by the "sacred" dogma of precedent. Free speech protections, though having limits (nothing in the clause, for instance, would demand that Rush Limbaugh be the featured speaker at the next Democratic National Convention, or that someone could spray-paint Snoop Dogg lyrics on the Jefferson Memorial), are still accorded broad and powerful protections in this country, and in ways that remain unseen in many other Western liberal democracies.

Which is how it should be; otherwise, what would free speech protections mean if only popular speech were protected? The whole purpose of the free speech clause is to protect offensive and unpopular "speech," in whatever form it might come. That's why the Supreme Court has consistently rejected the argument that speech can be punished because it offends some people's sensibilities, and is precisely why it has with regularity invalidated statutes and practices that penalize expression based solely on content.

After all, the High Court, under the umbrella of free speech protections, has upheld the right of the American Nazi Party to hold a march in a Jewish neighborhood, the right of the Ku Klux Klan to spew its venom, and the right of Gregory Lee Johnson, then a member of the Revolutionary Communist Youth Brigade, to burn an American flag and shout "America, the red, white, and blue, we spit on you, you stand for plunder, you will go under!" Thus, why should Fred Phelps and his pious thugs be denied the same, however offensive their actions might be?

Westboro Baptists
For about 20 years, members of the Westboro Baptist Church, located outside of Topeka, Kansas, have been picketing military funerals in the belief that these deaths are God's punishments on America for its tolerance of homosexuality, particularly in the military (ironically enough, one of the few places left in public life where sexual preference can mean dismissal).

Westboro, an independent Baptist church (not affiliated with any other Baptist organization), was founded by its pastor, Fred Phelps, and it consists mostly of his family members. A few years ago Phelps, along with six other of the faithful, traveled to Maryland in order to picket the funeral of Snyder, who was killed while serving in Iraq. The picketing took place on public land approximately 1,000 feet from the church where the funeral was held, and was in accordance with guidance from local law enforcement officers. Phelps and his nasty little troop peacefully displayed their signs—"Thank God for Dead Soldiers," "Fags Doom Nations," "America Is Doomed," "Priests Rape Boys," and "You're Going to Hell"—for about 30 minutes before the funeral began.

Others—not just Catholic priests and dead Marines—have fallen afoul of Westboro Baptist's "righteous" indignation, too. In 1996, for instance, Phelps led a protest march against the United States Holocaust Memorial Museum in Washington, D.C., proclaiming that "God has smitten Jews with a certain unique madness. . . . Jews, thus perverted, out of all proportion to their numbers energize the militant sodomite agenda. . . . Jews are the real Nazis."

The dead marine's father filed a lawsuit against the church, claiming the "intentional infliction of emotional distress, intrusion upon seclusion, and civil conspiracy." A lower court jury held Westboro liable for millions of dollars in compensatory and punitive damages. After a few appeals, including a reversal of the original decision against the church, the case made it to the U.S. Supreme Court, which issued its verdict in March 2011, stating in rather mundane terms that "the First Amendment shields Westboro from tort liability for its picketing in this case."

No Zero-Sum Game
However much the First Amendment might shield this kind of speech, what it doesn't do is address the blowback that could follow from these kinds of decisions. Such protections are not a zero-sum game, and can come with repercussions. For instance, right after the Westboro decision the blogosphere was rife with speculation about what will happen when Phelps and company picket another dead Marine's funeral and some post-traumatic-stress-syndrome serviceman decides to administer his own form of justice with an M-16. Or, on a larger scale, could these kind of exceedingly unpopular court decisions (which is precisely why we have a court system somewhat independent of the democratic process) cause a backlash in which large portions of the demos seek to impose free speech restrictions on those whose views it deems offensive?

Who knows? What seems clear is that, at least for now, the U.S. Supreme Court has, with this decision, upheld the tradition of free speech that has evolved over the past century. It was the right decision, it was a consistent decision, it was the kind of decision that the Court was designed to make. That is, it took a basic constitutional right and placed a hedge of protection around it, regardless of how offensively that right has been used (or abused).

Unfortunately, because of this decision, we haven't heard the last of the Westboro Baptists and their unusually hateful expression of faith. One wonders if they have ever heard of Jesus' words: "Judge not, that you be not judged. For with what judgment you judge, you will be judged; and with the measure you use, it will be measured back to you" (Matthew 7:1, 2, NKJV).*