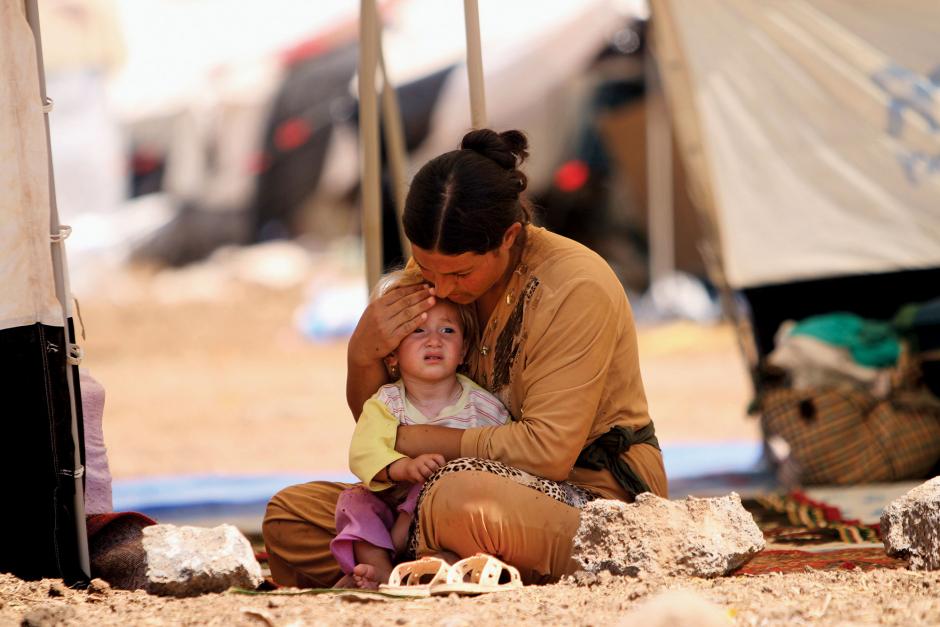 The Cries of the Persecuted

I have a grave and growing sense of urgency regarding the erosion of religious liberty at home and abroad. All over this world, people of faith are denied the fundamental and inalienable human right to confess and express their faith according to the dictates of their conscience. According to Pew polling data, more than 70 percent of the world’s population, 5.5 billion people, at this very moment live in a religiously repressive country.

While our national interests are complex and manifold, we can be assured that it always befits a great nation to stand boldly with the forgotten, the oppressed, the silenced and the imprisoned. If not America, then who?

This is tragic because religious freedom is not only deeply embedded in our own legal tradition reaching all the way back to the Magna Carta, but is also understood as a necessity for human dignity by the international community.

Article 18 of the Universal Declaration of Human Rights explicitly states: “Everyone has the right to freedom of thought, conscience, and religion; this right includes freedom to change his religion or belief, and freedom, either alone or in community with others and in public or private, to manifest his religion or belief in teaching, practice, worship and observance.”

But tragically, this is not the case for billions of people in the world. The Middle East is aflame with radicalism. Entire swaths of territory are presently controlled by murderous men who have committed unspeakable acts in an attempt to cleanse the region of Christians and other minorities.

The summer of 2014 was marked by the swift and largely unanticipated rise of ISIS. Unspeakable brutality followed. A caliphate was declared. Christians were told to leave, and if they stayed, to convert, pay, or die. Yezidi men were killed, and Yezidi women and children were bought, sold, raped, and tortured. Religious freedom suffered a devastating blow. Men, women, and children had their lives upended, homes confiscated, and dignity assaulted.

More biblical activity took place in Iraq than any other country other than Israel. The great patriarch Abraham came from Ur in southern Iraq. Isaac’s bride, Rebekah, came from northwest Iraq. Abraham’s grandson, Jacob, spent 20 years in Iraq, and his sons, the 12 tribes of Israel, were all born in northwest Iraq. The remarkable spiritual revival portrayed in the book of Jonah occurred in the city of Nineveh, which is present-day Mosul. The burial tombs for Jonah, Nahum (whose tomb we saw while we were there, just miles from ISIS-controlled territory), Daniel, and Ezekiel are all in Iraq. Many of the Christians in Iraq speak Aramaic, the language of Jesus.

A phrase not often heard outside of the Middle East is “first the Saturday people, then the Sunday people.” The Jewish community in Iraq numbered 150,000 in 1948; now there are fewer than 10 elderly Jewish individuals living there. The Iraqi Christian community, which numbered 1.5 million in 2003 when the war broke out, is now at 250,000 and falling. Right now, Christian families are leaving Iraq every single day. Many of those who remain have become involuntary nomads in their own land, displaced one, two, even three times.

One man I met told me that he tried taking his wife to a hospital in ISIS-controlled Mosul so she could receive treatment for her breast cancer. When they arrived at the hospital, they were met by an ISIS guard who refused to allow them entrance because they were Christian. They were told that the price for entrance and treatment was conversion to Islam. They refused and returned to their village 16 miles away. Ten days later the wife passed away with her husband and her two sons at her bedside. She was 45.

One Yezidi leader with whom we spoke told us that his pregnant sister-in-law was captured and sold by ISIS. He said, “They were selling the virgin girls for $20 . . . unbelievable.” In the city of Dohuk I listened to the stories of two young Yezidi girls who had been captured by ISIS and later escaped. Several months ago I met with one young Yezidi girl in my office in Falls Church, Virginia. She had been raped by an American who had joined ISIS who showed her pictures on his phone of his family back in the United States.

In 1944 a Polish-Jewish lawyer named Raphael Lempkin coined the word “genocide” to describe the Nazi policies aimed at the destruction of the European Jews. I believe what is happening in Iraq right now is genocide.

Outside of the Dachau concentration camp there is a sign that says “Never Again” in five languages: Hebrew, German, English, French, and Russian. And yet time and time again, genocide has occurred, and the West has stood idly by.

However, Iraq is far from the only country plagued by religious persecution. These are perilous times for people of faith around the world.

During a trip to Nigeria this February, with colleagues from the 21st Century Wilberforce Initiative, we interviewed many Christians from the middle belt and the north. They told of people from their villages being harassed, kidnapped, and killed in attacks from Boko Haram and the militant Fulani herdsmen. They feel forgotten by their own government and by the West and by the Western church.

Bono, the Irish singer, said that if Nigeria unravels, the refugee crisis will be an existential threat to Europe. A political and human rights activist from Nigeria told us, “Nigeria is very fragile. If these 180 million are displaced, they will overrun Africa. They will overrun Europe. And business interests in the United States will be directly and negatively impacted. Nigeria is ready to break into pieces, and it won’t be violence-free. We are trying to prevent that.”

According to the United States Commission on International Religious Freedom, some see China’s pattern of persecution against Christians that started in 2014 “as the most egregious and persistent since the Cultural Revolution.” In China, Catholic bishops sit under house arrest, and Protestant pastors and laypeople are in prison for holding services in their homes.

When I slipped into Tibet in the midnineties, what I saw going on there was frightening. Buddhist monasteries are regulated by cadres of police. Simple acts such as possessing pictures of the Dalai Lama are forbidden and harshly punished. At least 140 Tibetan Buddhist monks and nuns have poured gasoline on themselves and set themselves on fire in protest of governmental persecution. Ugyhur Muslims and Falun Gong are repressed by the Chinese government simply for following the dictates of their conscience. And the world is silent.

On my last trip to China, all but one of the religious leaders scheduled to meet with me were imprisoned the day before. The only one who made it was later beaten and arrested by the police. As we speak today, Christian lawyers and activists are still being arbitrarily arrested by the Chinese government.

Asia Bibi, a Pakistani Catholic woman, has been in prison since 2009 for making a public profession of her faith. She was imprisoned for an entire year before being formally charged and tried. In 2010 she was sentenced to death by hanging. She just marked her sixth year in prison. And the West is largely silent.

My friend Shabaz Bhatti—the only Christian member of the Pakistani cabinet at the time—spoke out against the blasphemy laws and in support of Bibi. He was assassinated in 2011, gunned down while leaving his mother’s house. The same year, Salmaan Taseer, the Muslim governor of Punjab, was assassinated by his own security detail for the same reason. In addition, the Ahmadi Muslims have been facing discrimination and violence in Pakistan for decades. They are not allowed to call their places of worship “mosques” or publicly quote from the Koran.

In Ethiopia, which sowed the seeds for my lifelong passion for human rights, Christians face persecution from a host of different sources. And just across the border, in Eritrea, Christians are regularly arrested, beaten, and kept in storage containers in what is known by many as “the North Korea of Africa.” In Egypt the ancient community of Coptic Christians numbering 8-10 million continues to face persecution, and many are leaving in droves for the West. The Baha’i population in Egypt cannot even get driver’s licenses, since they do not fit the government’s narrow requirement of being either Christian or Muslim.

In Europe we see growing anti-Semitism, and it is even in America. A recent study by the Simon Wiesenthal Center finds an increase in anti-Semitism on college campuses across the United States. In a separate report from the U.S. Commission on Civil Rights from 2005, Nathan Sharanksy, a champion for human rights in the Soviet Union who spent nearly a decade in prison, called American college campuses “islands of anti-Semitism” where young students are intimidated into silence and “Israel is epitomized as the epicenter of everything that is hateful in the universe.” A recent poll found that 54 percent of Jewish-American college students witnessed or experienced anti-Semitic incidents last year. These incidents include vandalism, acts of violence, hate speech, and even cases of students being spit upon for supporting the existence of a Jewish state in the Middle East.

In Reverend Martin Luther King Jr.’s “Letter From a Birmingham Jail,” he admonishes the clergy and the church by stating, “I must honestly reiterate that I have been disappointed with the church. . . . When I was suddenly catapulted into the leadership of the bus protest in Montgomery, Alabama, a few years ago, I felt we would be supported by the white church. I felt that the white ministers, priests and rabbis of the South would be among our strongest allies. Instead, some have been outright opponents . . . ; all too many others have been more cautious than courageous and have remained silent behind the anesthetizing security of stained-glass windows.”

King goes on: “In deep disappointment I have wept over the laxity of the church. But be assured that my tears have been tears of love.”

We need to be clear-eyed about the times in which we live, to be thoughtful about the challenges and prayerful about our response and never be satisfied with allowing religious persecution to remain a global norm.

Frank R. Wolfe served as representative for Virginia's tenth congressional district in the U.S. House of Representatives for 36 years before his retirement in 2015. Mr. Wolf is now Distinguished Senior Fellow at the 21st Century Wilberforce Initiative.