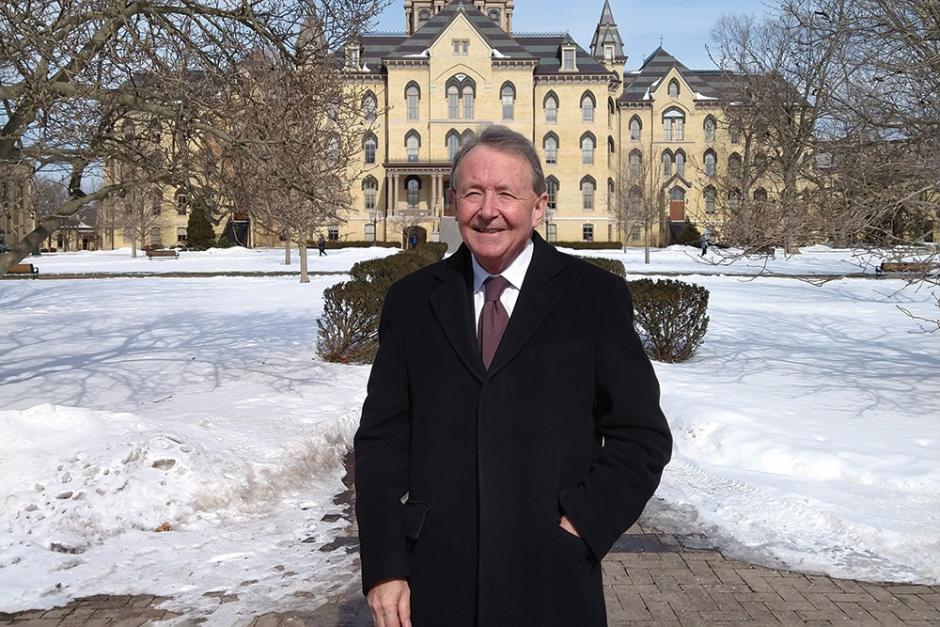 The Crime above All Crimes

A conversation with Britain’s Lord Alton of Liverpool about genocide, human rights, and international apathy

David Alton, Baron Alton of Liverpool, is an academic, author, and member of the British House of Lords, where he serves on the International Relations and Defence Select Committee.

He began his career as a teacher in England’s northwestern port city of Liverpool. In 1972, while still a student, he was elected to Liverpool City Council as Britain’s youngest city councilor. In 1979 he became the youngest member of the House of Commons, and he continued as an elected member of Parliament for almost two decades.

Yet the role for which Lord Alton is best known internationally is that of human rights campaigner—and particularly, for the relentless spotlight he continues to shine on the crime of genocide.

In 1997, when he accepted a life peerage from Queen Elizabeth II, Lord Alton turned to Scripture for the motto to accompany his coat of arms. He selected a phrase from the book of Deuteronomy, “Choose Life.” It’s a poignant motto given the amount of time Lord Alton has spent in recent years visiting sites of past mass atrocities. In places such as Burma, Rwanda, Darfur, North Korea, and China, he has helped gather firsthand accounts from those affected by genocide and other crimes against humanity.

Liberty editor Bettina Krause recently interviewed Lord Alton about his efforts to engage the international community in the prevention and prosecution of what has aptly been called “the crime above all crimes.”

Bettina Krause: I’ve heard you say in other settings that “genocide” isn’t a word that should be used lightly or inaccurately, but that we should never hesitate to use it when the threshold has been met. So what exactly is genocide?

Lord Alton of Liverpool: Genocide is a crime perpetrated against a national, ethnic, racial, or religious group with the intent to destroy that group, in whole or in part. It’s defined in Article II of the United Nations Convention on the Prevention and Punishment of the Crime of Genocide, which sets out prohibited acts.

So the crime of genocide is a crime targeting a group and its existence—not an individual.

Genocide is often referred to as the crime above all crimes because of what genocide attempts—the destruction of a group in whole or in part. We saw it with the Nazi atrocities during the Holocaust of the Jews, and we’ve seen many other instances of genocide since.

In 1941, as the Nazis were killing Jews and destroying all signs of their existence, Winston Churchill said that this was a crime without a name. Raphael Lemkin, a Polish-Jewish lawyer, later coined the word “genocide” from Latin words genos, tribe or race, and cide, or killing. He also conceptualized the crime of genocide and worked toward an international treaty on genocide and domestic provisions criminalizing it.

Krause: So if we have an international framework for understanding genocide and, theoretically, for responding to it, why does “never again” keep happening?

Alton: We have an international treaty that imposes obligations on states to prevent and punish the crime of genocide, but not much more than this. It’s a treaty without teeth and is often used as a fig leaf to cover up the persistent lack of a coherent or concerted response.

In addition to the treaty, many states have introduced laws criminalizing genocide, but they are often reluctant to actually investigate and prosecute the crime.

In relation to their duty to prevent genocide, during seven decades since the United Nations treaty was adopted, states still don’t appear to understand what that duty means, and what it requires them to do. They don’t have foundational mechanisms that would enable them to implement this duty. As such, by default, states fail to prevent the wretched recurrence of genocide.

Krause: You’ve recently written a book, along with Dr. Ewelina Ochab, called State Responses to Crimes of Genocide.  What spurred you to take on that project, and what do you hope a book such as this will achieve?

Alton: We both feel passionately that we need a change in our responses to genocide, and that if we want to be able to prevent future genocides, this change is urgently needed.

I’ve visited and interviewed victims and documented genocides in places like Darfur and northern Iraq. But in speaking about genocide after genocide, and focusing on the risk factors and early warning signs to full-blown genocides, I’ve met with a depressing lack of political will.

I thought it was time to set out the story of genocide and its effects on those who have suffered so grievously—from the Armenians to the Yazidis, from the Rwandans and Bosnians to the Rohingya and many others. I was fortunate to be able to work with Dr. Ewelina Ochab in drawing together the many strands and threads, and especially in examining the granular detail of what the law does and what it fails to do.

Krause: The House of Representatives here in the US recently passed a resolution recognizing the Armenian genocide—something that took place more than a century ago, and that modern-day Turkey still adamantly denies ever happened. Some may think resolutions such as this don’t serve any practical use. They’re merely words. But what are your thoughts?

Alton: Recognizing past genocides for what they are may appear to be “only words,” but it is far from the case and hugely important.

Adolf Hitler reputedly asked scornfully, “Who now remembers the Armenians?” as horrendous plans were being laid for the “Final Solution.” Recognizing past genocides is crucial for survivors and their families, but it’s also crucial if we are to prevent future atrocities.

Past atrocity crimes and the perpetrators’ impunity for such crimes—who are seen to be getting away with genocide—is a crucial risk factor in future atrocities.  Along with other risk factors and early warnings signs, we should always recall what has happened before. We’ll succeed only if we have a comprehensive analysis of the serious risk of genocide.

Genocide does not happen overnight. It’s a crime that is planned and implemented step by step. Before genocide is committed, there are early warning signs and risk factors. For example, the UN has created a framework for analysis of atrocity crimes that include several risk factors that could help states to analyze situations at risk of genocide or other atrocity crimes.

Krause: When we look back at different genocides such as the Holocaust, or what happened in the Balkans or Rwanda, I wonder if some of us have a false sense of security that these are things that belong to history, or that happen only somewhere else.

Alton: Genocide may be seen as a crime perpetrated “somewhere else,” but this is far from the truth. The Nazi atrocities were perpetrated on European soil. The Srebrenica genocide as well. The Daesh [or ISIS] genocide was joined by willing participants from more than 80 countries around the world, including the US, the UK, Germany, France, and Belgium.

Now we’re talking about the incitement to genocide and the atrocity crimes in Ukraine—as perpetrated by Putin and his army. In the Horn of Africa, also, there’s chilling evidence coming out about the systematic targeting of Tigrayans.

Krause: Through the years you’ve traveled to a great many different genocide sites, you’ve visited with those whose lives and families have been devastated, you’ve seen the impact of these atrocities on communities. How has this affected you personally?

Alton: I visited the genocide sites in Rwanda, meeting with orphaned children and traumatized families, and I was deeply shocked to be taken to a former technical college where Tutsis had gathered to seek protection from the international soldiers garrisoned nearby. I saw the skeletons of those who had been murdered while the peacekeepers did nothing. I saw a mass grave that had been covered over and turned into a football pitch for the soldiers.

With my friend Rebecca Tinsley I traveled from that visit to Rwanda to Darfur. We collected evidence and witness statements that demonstrated that the same thing was happening all over again. I wrote about it for The Independent newspaper, and my account appeared under the headline “If This Isn’t Genocide, What Is?”

Ultimately the International Criminal Court agreed and named the Sudanese head of state and others as responsible for genocide. But not before 300,000 people were dead and 2 million displaced. The perpetrators and those who gave the orders are indicted, but still not tried or convicted.

I could repeat the same stories from visits elsewhere—in Burma and northern Iraq, for instance. But beyond the horrific accounts and the numbing statistics, the individuals who have suffered such inhumanity and savagery demand a more effective response from those of us who can make our voices heard.

Krause: As you look to the future, what are your thoughts about the international community’s ability to significantly improve its response to the crime of genocide. Are there any reasons to be optimistic?

Alton: There are no reasons to be optimistic unless we actually do something to change the current inaction. It’s no good just hoping for the best or hoping, like [Charles Dickens’ character] Mr. Micawber, that “something will turn up.” As I explain in the book, those who perpetrate genocide think they can get away with it. And too many states are unwilling to admit that they are not equipped to prevent genocide.

We’ve allowed the biggest authoritarian actors to show utter contempt for the rule of law, and smaller players then believe they can do the same. Take what is happening in western China as an example.

I’ve been personally sanctioned by the Chinese Communist Party for, among other things, denouncing the genocide under way against the Uyghurs in Xinjiang. A chapter in the book is dedicated to setting out their story.

The previous and current US administrations have both declared there to be a genocide against the Uyghurs. The UK’s foreign secretary [now prime minister] Liz Truss agrees and says it is a genocide.

Krause: So, when are the UK, the US, and other democratic nations going to raise this at the UN Security Council?

Alton: Clearly it will get nowhere at the UN Security Council, because China or Russia will use their veto. Yet forcing them to veto a referral to the International Courts would itself speak volumes—and might even begin a long-overdue movement to remove the right of veto in the case of genocide.

States must recognize the flaws in their responses and introduce comprehensive mechanisms that will enable them to identify situations at risk of genocide and act. Until then, we will see more attempts to annihilate whole communities.