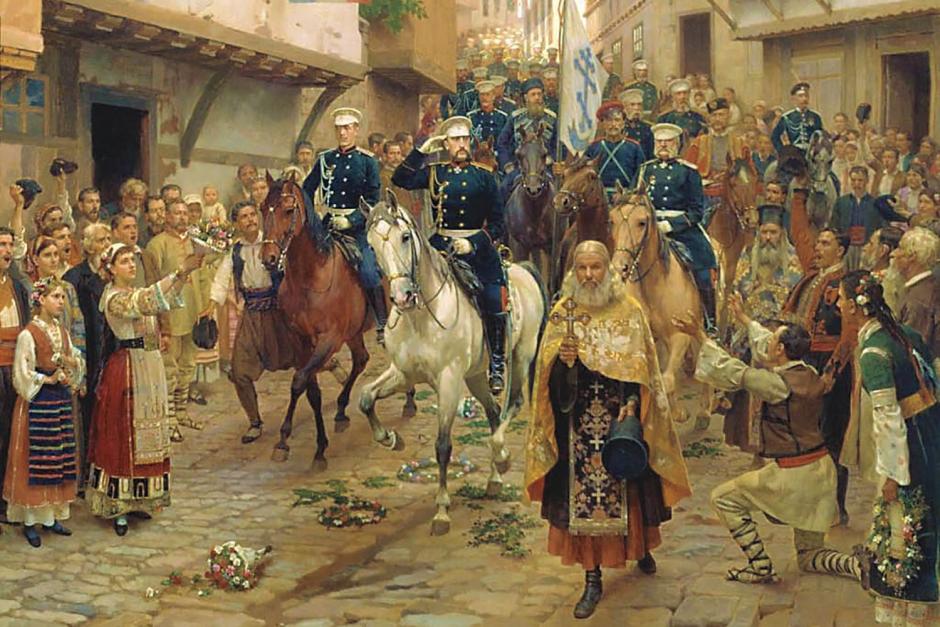 The Devil Is in the Details

If the historical facts were analysed,” wrote a cynical Jean-Jacques Rousseau (1712-1778), “[we would see] that no state has ever been founded without religion as its base; and . . . that the Christian law is at bottom more injurious than serviceable to a robust constitution of the state.”1 Rousseau was referring to the biblical law to love one’s enemies, to humble oneself and to resist evil nonviolently. He went on to declare that a “Christian republic” [based on the gospel ethic] “confronted by Sparta or Rome . . . will be beaten, crushed, destroyed.”2 Anyone who has read the New Testament cannot help agreeing that the gospel ethic, not to mention the eschatology and the apocalyptic, represents insurmountable barriers to the building of what might pass for a Christian state. And at the outset I must specifically state that a perfectly serviceable civil state can and might ideally be built with a citizenry of godly Christians. But a state structurally and consciously Christian simultaneously falls victim to a private view of what Christianity itself is, and sells itself to the ancient gods of power and entitlement.

Of all the barriers to establishing a modern Christian state the ultimate is apocalyptic, or, precisely, “that ancient serpent called the devil, or Satan, who leads the whole world astray” (Revelation 12:9).* In fact, “the whole world,” according to 1 John 5:19, “is under the control of the evil one.” If “the devil . . . leads the whole world astray” or controls it, the crucial question becomes: how does a Christian state establish itself in the world? How does it escape demonic deception? How does it resolve the perennial problem of evil, within and outside its borders? These questions are fundamental. The eradication of evil or establishment of a just and moral order is the raison d’être for a Christian state—indeed, the raison d’être of every state that has claimed divine sanction since time immemorial.

In his famous code, Hammurabi declares that Anu and Marduk have named him “to cause justice to prevail in the land, to destroy the wicked and the evil.”3 Paradoxically in the Babylonian creation epic Enuma Elish, evil is coextensive with the origin of things. First, the gods come into being from Tiamat, the primeval chaotic mass (personified as the “mother of them all”); then the new gods brutally murder Apsu, the primordial father. When Tiamat tries to avenge, she is killed and sliced in two by Marduk, who becomes king of the gods. And the cosmos—heaven and earth—is formed from Tiamat’s sliced corpse. Marduk then slays the chief of the rebel gods; and from his blood humanity is created to be the slave of the gods. In this myth, like all pagan myths, violence or evil “is not an accident that upsets the previous order; it belongs constitutionally to the foundation of order.”4

But, paradoxically again, evil is not restricted to the origin of order; its ordering activity is renewed through ritual. Marduk’s victory over Tiamat, his ascendancy to the summit of divine government, was solemnly recited, mimetically reenacted and ritually dramatized by the whole society in annual public festivals. And, as Paul Ricoeur rightly observed, in these rituals “human violence is thus justified by the primordial violence.”5 The deep dread, the scrupulous care taken to follow these rituals, should disabuse us of the fallacy that there were ingenious or infantile inventions. In any case, all primitive societies and ancient civilizations described their religious experiences as “coming,” “revealed,” or “handed down” to them—in a language, in other words, that tellingly suggests extra-human agency.

To be sure, the diverse worldwide movements to control unbridled violence by criticizing the gods and moralizing mythology again suggests an extra-human agency in archaic religions. Tellingly, all of these movements tried to create a gulf between humans and the gods. Karl Jaspers coined the phrase “Axial Age” to describe the almost contemporaneous appearance of these movements in the eighth century B.C.E.: Confucianism and Taoism in China, classical prophecy in ancient Israel, Hinduism and Buddhism in India, and philosophy in Greece. The criticism of mythology and the

gods was sharper in Greece. Attacking the violent atrocities of the gods, Euripides, a tragedian, has Heracles, one of his characters, ask: “Who would wish to pray to such deities?” and denounced myths as wretched lies of the poets.6 Plato also excoriated the poets for sanctifying the violence and immoralities of the gods and excluded them from his republic.

Although Jaspers puts the origin of ethical monotheism in the Axial Age and credits it to classical prophets, it in fact antedates the prophets. It dates to the seventeenth century B.C.E., to the patriarchs, who like the primitives described their spiritual experiences as coming, revealed, or handed down to them. But inscribed in their experiences was an implicit anti-pagan polemic. To be sure, the history of ancient Israel began with “a double exodus—the patriarchs’ exodus from Mesopotamia and the great exodus from Egypt.” And in both cases it constituted “a vehement repudiation of both the Egyptian and Mesopotamian versions of cosmic order.”7 If evil, as noted, was foundationally inscribed in these orders, then the Genesis creation story stands alone in its negation of the cosmological basis of violence and evil in ancient times.

This negation is encapsulated in the very first verse: “In the beginning God created the heavens and the earth” (Genesis 1:1). Here, “Genesis, by speaking about the origins of heaven and earth, denies the eternity and, a fortiori, the divinity of the visible universe.”8 This is radical disenchantment. Elements of nature, which pagans regarded as gods and mediums of the sacred, become mere matter, inert objects, and creations of God. Swept away at a stroke here is all the mythological freight about the violent generation of the gods (theogonies) and generation of the cosmos (cosmologies) whose primary role was political, to legitimize royal authority and social hierarchy. Again, the story of the Fall in Genesis 3 is unequivocal: the origin of evil is historical, not primordial. It began in “a creation which has already had its absolute beginning in the creative act of God.” The intention of Genesis 3 “is to set up a radical origin of evil distinct from the more primordial origin of the goodness of things.”9

The Fall is deemed a myth by some. And true, it can’t be coordinated with history as we know it. But the serpent’s lies—that “you will not certainly die” and “you will be like God”—can be coordinated anthropologically with ancient history. The pursuit for divinity and immortality are key mythological themes and are expressed institutionally in divine or priestly kingship and hero worship; and cosmologically in the fusion (or, more precisely, con-fusion) of the human and the divine, the living and the dead, the religious and the political, to create a closed, all-embracing universe. If the Exodus signified a radical exit from this closed universe, it also marks the beginning of the historical drama of salvation, whose chaotic episodes and inscrutable backdrop forces are deciphered in “the revelation from Jesus Christ” (Revelation 1:1).

And “the revelation,” to cite Erich Auerbach, “seeks to overcome our reality: we are to fit our own reality into its world, feel ourselves elements in its structure of universal history.”10 To be sure, written in Greek, under the Roman Empire, but drawing deeply from the Hebrew Bible, the Apocalypse transverses the four ancient streams—Jewish, Christian, Greek, and Roman—that flowed into Western civilization.

Tellingly, reflecting the historical fact that “no state has ever been founded without religion as its base,” it reveals that behind all world empires, represented by grotesque monsters, is “the great dragon . . . that ancient serpent called the devil, or Satan, who leads the whole world astray” (Revelation 12:9). This insight into the demonic base of imperial Rome is the reason Christians refused to worship the emperor. Incidentally, according to Elaine Pagels, contrary to modern “enlightened” skepticism, pagans agreed with early Christians that the gods embodied real elemental powers in the universe; but while pagans revered them as divine patrons, Christians denounced them as demons, fallen evil angels.11

Still, Christians recognized Caesar’s authority, still gave him what belonged to him. As such, the thrust of their denunciation was to drive a wedge between Caesar and the gods, paganism and the empire. This was radical desacralization of politics. A psychological accompaniment of this desacralization is humility, the renunciation of pride, the recognition of one’s creaturehood before God. And this humility finds its classic demonstration in Jesus, “who, being in very nature God, . . . made himself nothing, by taking the very nature of a servant, being made in human likeness” (Philippians 2:6, 7). The servanthood of Christ inverted the Roman hierarchy and made the Christ the only “mediator between God and mankind” (1 Timothy 2:5).

Put together, the disenchantment of nature inscribed in the Genesis creation story, the desacralization of politics expressed in the apocalyptic polemic against pagan gods, the dehierarchization personified in the servanthood of Jesus and His exclusive mediatorial role, fundamentally negates paganism’s mythological infrastructure. This negation reprises the question of “the process of Christianization . . . the nature and modes of authority, by which a universal Christian church . . . came to replace a universal empire.”12 For in all the noted spheres—nature, politics, society, and spiritual mediation—nothing changed. Nature was still enchanted, politics still sacralized, society still hierarchized. Even the gods, with all the mythological freight, survived in art and literature and popular religion, all under the patronage of the church.13

If, as noted, the mythological infrastructure was congenitally infected with violence and the gods were demons, according to the New Testament, then “Christianization” embedded violence and demons in the gospel, the Apocalypse in particular. By the late Middle Ages “it came to seem that the world was in the grip of demons and their human allies were everywhere, even in the heart of Christendom itself.”14 In fact, clerics projected all of the demonic attributes on Jews and heretics, until they became in popular imagination identical with the devil himself.15 And in a grotesque parody of the end-time destruction of the wicked, clerics burned thousands at the stake. This materialization of the apocalyptic is also behind the Crusades and revolutionary millenarian sects that flourished in medieval Europe.16

Medieval violence has been excused or belittled as an aberration, attributable to the crudeness of the time. In The Formation of a Persecuting Society, R.I. Moore presented a compelling counterargument,17 horrifyingly confirmed by the reappearance of sacred violence in our time. The phenomenon of ISIS in the Middle East is a case in point. Political theology, as Mark Lilla warned, “is the primordial form of political thought and remains a live alternative for many peoples today.”18 And it “remains a live alternative” because the devil is real and alive, masquerading as an angel of light (2 Corinthians 11:14). That is why the Apocalypse is very clear: the devil must be destroyed first and by God (Revelation 20:10) before the kingdom of God is established on earth. Accordingly, any Christian or godly state built before the destruction of the devil has him, the archdeceiver, embedded in the design and structure.

12 Peter Brown, Authority and the Sacred: Aspects of the Christianization of the Roman World (New York: Cambridge University Press, 1995), p. 53.

15 Joshua Trachtenberg, The Devil and the Jews: The Medieval Conception of the Jew and Its Relation to Modern Anti-Semitism (Philadelphia: Jewish Publication Society, 1983).