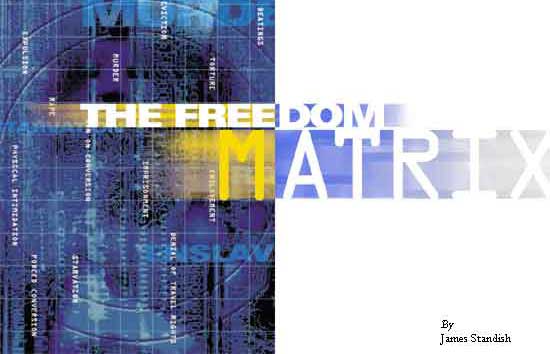 Every morning the president starts his day in the Oval Office, surrounded by attorney general John Ashcroft, FBI director Robert Mueller, and CIA director George Tenet, reviewing the threat matrix. The threat matrix provides details on who is trying to attack America, how they are trying to attack, their chances of success, and what is being done to stop them. It must be a startling way to begin each day—particularly knowing that there is no one else the terrorists would rather kill or capture than the commander in chief himself. It is serious business, and the stakes are the highest since the Civil War: in many ways, the very survival of American civilization.

An equally serious business is the brutality meted out to millions of people every day by the tyrannical regimes that rule over them. Our press sporadically reports on this brutality: a gulag story from Pyongyang here, a piece on genocide in Sudan there, thrown together with concerns over religious freedom violations in such unlikely places as France and Belgium, along with the odd piece on religious freedom at home.

One of the problems in reading these articles is that they appear so infrequently that it can be difficult to evaluate the trajectory of the attitudes of the nations mentioned or the relative threat to freedom posed by their actions. This problem is only exacerbated by those who are quick to dub any act that impinges on freedom "persecution," with little attention to the relative severity of the problem in question. A "freedom matrix" can put these stories into perspective in the same way the threat matrix. aims to put the myriad of dangers posed to the nation into an understandable format. A freedom matrix is particularly easy to build because threats to religious freedoms fit into predictable, repeated patterns.

Understanding and
Using the Freedom Matrix
Download the Freedom Matrix
A sample freedom matrix is reproduced in this article. The purpose of the freedom matrix is to put acts against religious freedom into context and provide perspective on their relative severity. As a general rule, the closer the act comes to the upper left-hand corner of the matrix the more severe the act in question. The matrix makes three distinctions: private versus public actions, the frequency of the action, and the type of action in question. 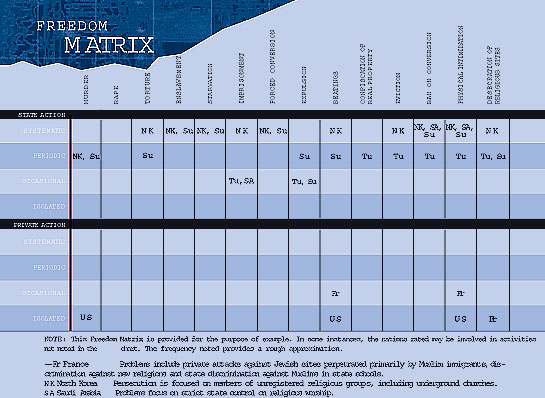 The first natural division between forms of suppression of freedom is between private and public action, that is to say, the division between acts by the state and acts by private entities. Private action is not necessarily less detrimental to fundamental rights than state action. Neither can it be said that the state necessarily has less responsibility for private action than it does for state action. In fact, in some cases the state actively encouraged private atrocities, as in the case of the former Yugoslavia. In addition, the principal function of the state is to protect the rights of its populace. Therefore, even when the state does not actively encourage behavior that suppresses freedom, it is responsible to act effectively to stop such behavior. 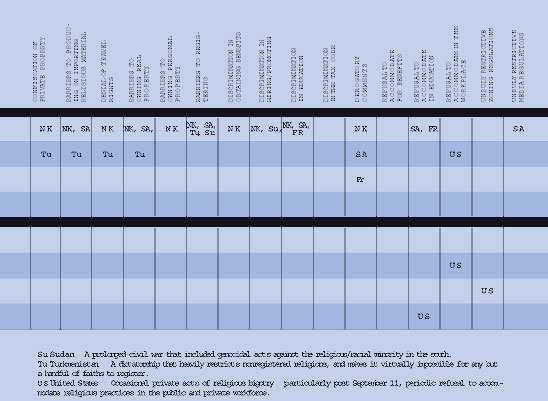 It is also worth noting that the more frequently the private actions against religious freedom occur, the more likely that the state is complicit in the actions, or, at the very least, complacent in the effort to stop them. Despite the close connection between private action and state inaction, the distinction is useful, as states are always culpable for state action but are not necessarily accountable for private action.

The second distinction made on the freedom matrix is the frequency in which a particular inhibition of freedom occurs. There is a very large difference between one murder in a decade prompted by religious hatred and the systematic slaughter of an entire religious population. The latter does not make the former less deplorable, but in assessing the relative threats to freedoms, the frequency of the problem clearly impacts the severity of the situation. Thus the religiously motivated slaughter during the Sudanese civil war ranks significantly higher than the isolated religiously motivated murders in the U.S. after September 11. The latter indicates isolated pockets of violent bigotry fueled by intense ignorance, while the former represents a state acting with genocidal intent.

The final distinction made is between common types of actions against religious freedom, grouped roughly into five categories of severity. The most severe actions against religion include religiously motivated murder, rape, torture, beatings, enslavement, starvation, imprisonment, forced conversion, and expulsion from a geographic region. These actions are the most severe forms of religious persecution. Even when these occur sporadically, the severity of the action involved requires the most urgent intervention.

The second category of actions also forms the basis of persecution; however, it is reasonable to recognize that these forms of persecution are somewhat less severe than the first category. These actions include religiously motivated confiscations of personal and real property, evictions, bans on conversions, physical intimidation, desecration of houses of worship, graves, and other sites of religious significance.

The third category of actions that frequently form the basis of persecution includes barriers imposed on religious activities. These include prohibitions on the production and/or importation of religious material, registration requirements designed to prevent bona fide religious organizations from registering with the state, barriers to individuals or organizations owning real and personal property based on religious criteria, and prohibitions on travel. A good example of a nation that engages in all of these activities is Saudi Arabia. It imposes restrictions on clergy traveling to the nation to provide spiritual services; it prevents the importation of nonapproved religious material; and it prohibits religious groups from owning and operating houses of worship. When imposed in concert, as in Saudi Arabia, the effect is to curtail religious practices of nonapproved faiths almost entirely.

The final category covers the responsibility of society to make appropriate exemptions for religious adherents from the general rules that govern society in recognition of their faith requirements. For a society to ensure that its populace enjoys full freedom of faith, it must recognize that the blind imposition of law does, in some cases, impose a discriminatory religious burden. For example, when a police force requires a particular hat as part of its uniform, it is not unreasonable to expect that an alternative will be made for Sikhs, whose religion requires them to wear a turban. Thus the police forces in many locations, including Great Britain and Washington, D.C., permit Sikh police officers to wear a blue turban with a police badge on the front instead of the standard helmet or cap. Refusing such simple accommodations indicates underlying discrimination and disregard of the goal of ensuring that all members of society are free to practice their faith in dignity and without unnecessary imposition of barriers.

Conclusion
The freedom matrix is as important to the future of our civilization as the threat matrix. Indeed, the majority of threats come from nations and movements that present the greatest failures as measured by the freedom matrix. Nations such as North Korea, Saudi Arabia, and the legacy of a Taliban-ruled Afghanistan are the sources for the threats that the president reviews each morning. The freedom matrix, therefore, is not just a useful tool for measuring religious freedom, but it is a useful tool in identifying the roots of the threats this nation and this world face.