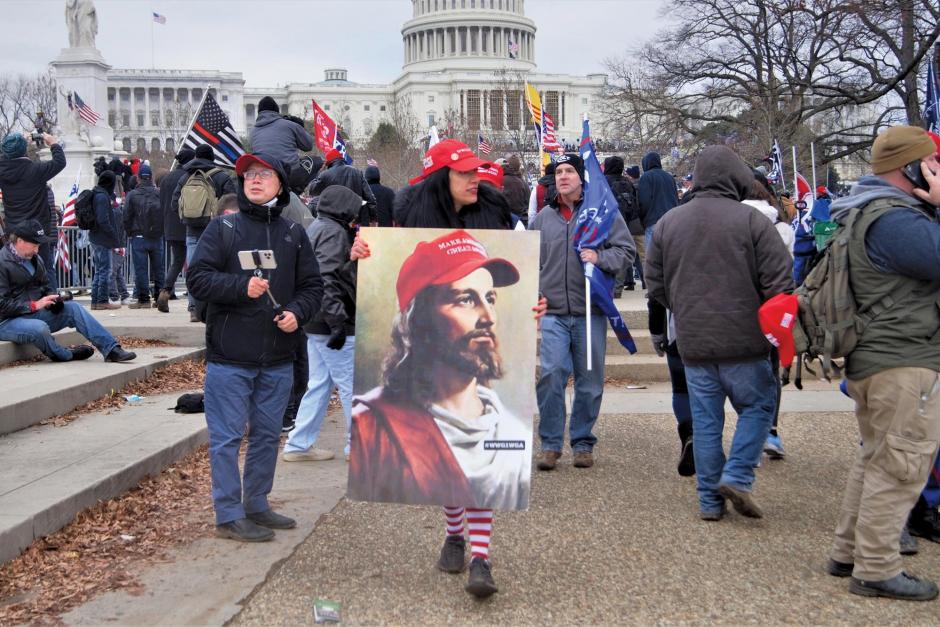 Alarmed at what they saw as the decay of morality in the nation, religious fundamentalists John Conlon and Bill Bright in 1976 organized a group of activist protestants, the Christian Freedom Foundation. Previously the Southern Baptist Association had sought to keep religion out of politics. But this “New Right” saw their marching orders as coming from what they regarded as the “excesses” of the 1960s; where abortion and homosexuality were weakening America from within. The Christian Freedom Foundation thus declared their purpose to be “electing real Christians.”

For the press, this was regarded as just one more instance of sectarian Christians, not to be taken seriously as a political force. As such, they were ignored.

But the Christian Freedom Foundation learned a valuable political lesson. Four years later, in 1979, the group was rechristened the Moral Majority and was made up—according to their manuals—of “72,000 ministers, priests, and rabbis.” A satellite group, Christian Voice, was applying a “biblical scorecard” to Congress, rating legislators according to their support for anti-abortion and anti-gay causes.

By that same year they were no longer regarded as at best a splinter group nuisance. Then-president Jimmy Carter felt compelled to stage a “White House get-together” for evangelists to discuss religion over a plate of grits. Republicans were also feeling the heat. Then-presidential candidate George H. W. Bush was so vilified at every campaign stop by the Moral Majority about his past support of “family planning” that he exasperatedly asked his campaign, “How do I get rid of them?” A nearby journalist heard him and said, “Change your position.”

That time around, journalists did not dismiss social conservatives, but saw their power as enormous and decisive for the 1980 presidential election. Observing a religious summit composed of various denominations, Robert Novak saw the die was cast for President Jimmy Carter: “Jimmy Carter’s goose was cooked because I saw the intensity of these people.”

How religious groups got to this position of power is recounted in Rick Perlstein’s Reaganland: America’s Right Turn 1976-1980. Although Perlstein locates other groups responsible for Ronald Reagan winning the White House—neoconservatives (hawkish Democrats disillusioned with Jimmy Carter’s “dovish” policies toward the Soviet Union); supply-siders; libertarians; and the “Silent Majority”—it is apparent that the sinews of the Reagan revolution came from social conservatives.

That is why Perlstein’s subtitle, America’s Right Turn: 1976-1980, should be amended to read How Social Conservatives Mastered the Art of Politics.

Perlstein’s métier has always been showing how the establishment saw consensus when the reality was a deeply divided country. Surveying the 1970s, liberals and centrists believed they had won the culture war. They pointed to the popularity of the hedonistic Saturday Night Fever, the Supreme Court ruling in Roe v. Wade, and the “acceptance” of homosexual lifestyles in Florida and California. Moreover, they saw in President Carter’s support in banning discrimination against homosexuals in the Army as proof that, as one gay activist proclaimed, 1977 was “the year of the gay.”

Such was the establishment’s blinders that they misinterpreted the best-selling book of 1974, The Total Woman, by born-again Christian Marabel Morgan. Liberals focused on her advice to Christian women to heat up the bedroom—another “sign” that liberal popular culture had made a dent. They completely missed the overriding thesis of the book: that a woman’s duty was “to surrender her life to her husband.”

To anyone without blinders, it was apparent that religion was on the rise in the 1970s. Five thousand people attended the Christian Booksellers Association in 1976. Christian psychotherapist James Dobson’s seminars on the need for traditionalist families were so popular that he became the host of a highly rated radio show. Evangelist preacher Pat Robertson ran a crisis counseling program with 6,000 workers trained to help those in need. Debby Boone, the daughter of social conservative singer/activist Pat Boone, received an Academy Award for her hit song “You Light Up My Life,” which she said was about her relationship with Jesus.

Perlstein shows that what lent such urgency to religious activism was the belief that the counterculture lifestyles rife in the land was causing the death of America and hastening Armageddon. Former missionary Hal Lindsey’s The Late, Great Planet Earth, a novel that asserted that the End of Days was at hand, sold 10 million copies. With “seventy of the prophecies written in the Bible” already “fulfilled,” Lindsey predicted that the “seven-year countdown to Armageddon” had begun.

For religious activists one of the “signs” of the nation’s fatal sickness were present in the ERA. The Christian backlash against it surprised its supporters, who viewed the measure as economic in design. Led by author and activist Phyllis Schlafly, the ERA’s religious opponents hated the amendment because it imperiled the traditional family unit by taking women out of their housewife roles and into the marketplace (Schlafly dealt with her heresy as a public activist by always introducing her speeches with a thank-you to her husband for “allowing me to come”).

Supporters of the ERA, which was defeated (being ratified in only 35 states), said that it couldn’t have been stopped without Schlafly. Of her leadership, professor of political science Jane J. Mansbridge said: “Many people who followed the struggle over the ERA believed—rightly, in my view—that the amendment would have been ratified by 1975 or 1976 had it not been for Phylis Schlafly’s early and effective effort to organize political opponents.”

The so-called Year of the Gay, 1977, saw the emergence of Anita Bryant, who led a burgeoning crusade against homosexual rights. She gathered supporters from eight states, and she was able to defeat several anti-discrimination bills.

Still smarting from the resounding defeat of his candidate Barry Goldwater by President Lyndon Johnson in 1964, Viguerie, by the 1970s, tested the political wind and ascertained that what was wrong with the conservative movement was its refusal to focus on social issues.

This was ironic, given that Viguerie started off with no interest in social conservatism. He became conservative when then-president Harry Truman fired General Douglas MacArthur during the Korean War for the latter advocating an invasion into mainland China. His interest in Senator Joseph McCarthy and William F. Buckley had nothing to do with their Catholicism, but instead their anti-Communist policies. [Interestingly, Donald Trump was an acolyte of McCarthy’s cutthroat lawyer Roy Cohn. Editor.]

Viguerie made social conservatism a force on the national level by the pioneering use of direct mailing. With the membership lists of those who donated and supported Bryant and Schlafly, Viguerie mailed out agitprop circulars twice a week to constituents. Anticipating what today would be called “alternative media,” Viguerie said of direct mailing: “The left” thinks of “direct mailing as fundraising. They miss the whole boat if they think that. It is a form of advertising. It’s not an evil conspiratorial thing. It is just a fact of life, which I haven’t found anybody to deny, that the major media of this country has a left-of-center perspective. The conservatives can’t get their message across the blockade, except through direct mail. . . . It’s a way of mobilizing support.”

By 1978 journalist Roland Evans characterized Viguerie’s direct-mail mobilization as a successful effort “to build a party within a party.”

What linked this group to other conservative factions that helped propel Reagan to victory wasn’t just Jerry Falwell “crossing over” to hawkish foreign policies and low taxes and support of Israel. JImmy Carter deserves some credit. A man of the left, Perlstein tries to rescue Carter’s reputation as a weak leader, but the net effect of the book is that Carter is portrayed as bumbling, tin-eared, and hopelessly naive (he only considered that the Soviets had a totalitarian and imperialist government after they invaded Afghanistan). He managed to alienate both conservatives and liberals (uber-liberal Tip O’Neill preferred Ronald Reagan as president to Carter). He refused to back a constitutional amendment banning abortion; linked arms with Bella Abzug; kissed Soviet premiere Brezhnev on the cheek; defended his Cabinet member Andrew Young’s praise of Castro. Yet Carter was in essence an architect of the Moral Majority, and because of his weak response to Soviet aggression (the Moral Majority saw Russia as the “antichrist”), bridged the gap between social conservatives and hawks.

Ironically, the Moral Majority then focused their energies on then-candidate Ronald Reagan, a divorced movie actor with admitted bed-hopping and one who voted for FDR four times. Perlstein shows Reagan’s documented obsession with the End of Days, and his support of school prayer and anti-abortion legislation. But he neglects Reagan’s passionate support of the separation of church and state:

“We in the United States, above all, must remember that lesson, for we were founded as a nation of openness to people of all beliefs. And so we must remain. Our very unity has been strengthened by our pluralism. We establish no religion in this country, we command no worship, we mandate no belief, nor will we ever. Church and state are, and must remain, separate. All are free to believe or not believe, all are free to practice a faith or not.”

The more one studies Reagan, the more it is apparent throughout Perlstein’s book that his real passions were foreign policy and low taxes (on his weekly radio program Reagan devoted eight consecutive broadcasts to standing up to the Soviets and reducing the size of government).

Conspicuously absent from Perlstein’s book is Barry Goldwater, who represented conservatism at odds with the Moral Majority. Goldwater saw them as a threat to the separation of church and state. He supported abortion rights and gays in the military. By doing so, he sought to separate conservatism from a draconian religious faction bent on “imposing their will on others.” In one speech he showed that to be a conservative, one must keep religion out of politics:

“I am a conservative Republican, but I believe in democracy and the separation of church and state. The conservative movement is founded on the simple tenet that people have the right to live life as they please as long as they don’t hurt anyone else in the process.”

Perlstein’s book is a compelling study of the nuts and bolts of the political process. It shows how religion has intruded into politics, a factor that is very much with us today.

This is the second time an author in Liberty has reviewed this book: not because it is the last word on the topic, although it is a very recent and pertinent work, but because of the so obvious manifestation of what it discusses in the recent presidential election. As this issue comes off the press, the “national nightmare,” to hark back to Watergate times, is likely still a publicly agitated memory. You need to know its antecedents. Editor.