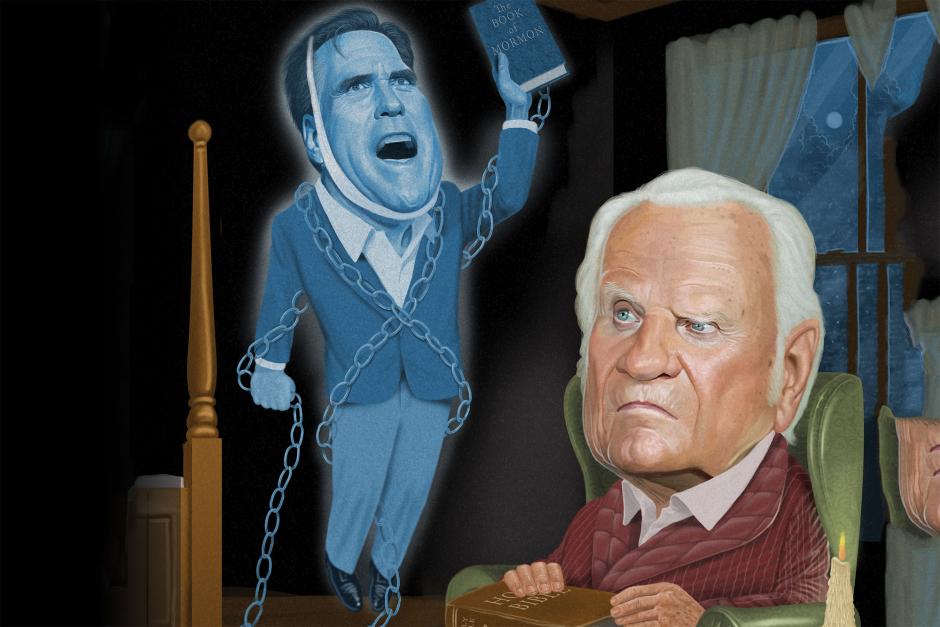 The Ghost of Elections Past

Recent actions by prominent evangelical Christians give evidence of compromise for the sake of political advantage, including what might be called one of the most striking theological sellouts in the history of the Christian church.

The closing days of the 2012 U.S. presidential campaign witnessed a remarkable, almost unbelievable reversal on the part of the world’s most iconic and conspicuous evangelical leader, regarding the identification of the Church of Jesus Christ of Latter-day Saints—commonly called the Mormon Church—as a theological cult.

Just in time for the second debate between President Barack Obama and challenger Mitt Romney, evangelist Billy Graham and his son Franklin met with Romney at Billy Graham’s North Carolina home. One political observer chronicles the subsequent story in a few short words:

“On Thursday, when they met, Mormonism was a cult on Graham’s Web site. On Tuesday, the offending passage was gone. Like Moses on Sinai, Billy Graham on his mountaintop in Montreat, N.C., changed the religious landscape with a snap of his fingers.”1

In evangelical and fundamentalist Christian circles, this cult identification has often been attached to such groups as Jehovah’s Witnesses, Mormons, Scientologists, the Unification Church, and others.2 The Web site of the Billy Graham Evangelistic Association, like similar groups within the evangelical orbit, identifies a cult as “any group which teaches doctrines or beliefs that deviate from the biblical message of the Christian faith.” 3 While they have the right to make this designation, it functions as an act of extreme religious prejudice.

Following this abrogation of Mormon cult status, Franklin Graham declared that the 2012 election was “America’s last call” for avoiding wrathful judgment from God.4 Noting the devastation wrought in the Northeast by Hurricane Sandy, Graham clearly implied that unless the country elected Mitt Romney as president, far worse calamities would likely befall our land. Apart from an attempt at political blackmail, such a prediction of future troubles would seem to match a truism with political intent.

One cannot speak of one who doubtless has been the world’s most prominent Christian evangelist for the past half-century or more, without a large measure of respect. Especially in light of the fact that Billy Graham and his family, unlike so many others in similar lines of labor in recent decades, have kept their ministry and personal conduct almost entirely scandal-free.

What is more, Billy Graham has for many decades distinguished himself as “America’s pastor”—the confidant and spiritual counselor to individuals from many walks of life, including presidents of both political parties. Now, it would seem, he is not immune to the drift toward crass partisanship.

But considering their posture and reputation in evangelical circles, it is truly impossible not to see this seismic shift on the Grahams’ part as one of the most jaw-dropping events in recent Christian history. Such a change of position is no less dramatic than if the late Jerry Falwell had decided abortion and homosexual marriage are in fact acceptable Christian practices, or if the pope were to decide to endorse artificial birth control.

The inescapable conclusion for the honest observer is that this reversal by the Grahams regarding Mormonism’s cult status was an act, borne not of biblical exegesis, but of political expediency. One is frankly appalled by what one reporter was constrained to call “the embrace of the moral relativism the church has always claimed to oppose”5 in the following statement by Graham spokesman A. Larry Ross:

“Through an inclusive evangelistic ministry spanning more than 60 years, Mr. Graham was called to preach the transformative message of the gospel to the whole world, regardless of one’s religious background, affiliation or none. As such, he never proselytized, targeted, or labeled specific people, groups, faiths, or denominations.

“Neither did Mr. Graham attempt to divide his audience before he had opportunity to preach to them. He has a genuine love for all people, and faithfully proclaimed the love of God to everyone, providing opportunity for them to respond by making a faith commitment.

“Mr. Graham’s calling is not to pass judgment, but to proclaim the biblical truth that Jesus is the only way to heaven, allowing every individual and group to fall along that plumb line.”6

Ross further stressed that “salvation is the work of God . . . and that only He knows what is in each human heart.”7

But if in fact the Grahams have “never proselytized [or] targeted specific . . . groups, faiths, or denominations,” why were the Mormons listed for so long as a cult on the Grahams’ Web site? And why does their site still in fact list other groups as such? The inconsistency here is nothing short of breathtaking.

Most important of all, why have the Mormons been removed from their status as a cult on the Graham’s Web site? Have the Mormons changed their theology recently? Have they renounced those areas of doctrine to which conservative Christians have hitherto raised objection? Or is this truly an open-and-shut, blatant case of theological compromise for the sake of political power?

Equally ironic is that many of the same evangelicals who insisted they couldn’t vote for President Obama because they doubted he was a “real” Christian chose to vote for one who—according to their own long-held religious tenets—is not a Christian at all. Of course they could have, all along, paid tribute to the constitutional requirement that there is “no religious test” for public office, but that has not been the case.

In the November/December 2011 issue of this magazine, my article “Leaving Faith Behind”8 noted a similar compromise on the part of Minnesota congresswoman Michele Bachmann, on the eve of her announcement of presidential candidacy in June 2011. After 10 years of membership in the Salem Lutheran Church of Stillwater, Minnesota, the Bachmanns left this church just before Michele entered the presidential race, citing as a reason their former denomination’s belief (stated on its Web site), that the Roman Catholic Church is the antichrist of Bible prophecy. They had every right to leave or change their minds, but one is obviously led to wonder why it took the Bachmanns 10 years to decide this belief was unacceptable to them. Did they suddenly find biblical or other problems with this particular tenet of Lutheran theology? Or did it have more to do with the large number of Catholics living in such states as Iowa and New Hampshire?

With this declaration by the Grahams regarding Mormonism, we confront a far more conspicuous sacrifice of biblical absolutism and theological integrity on the altar of political gain. To the present writer’s knowledge, the Mormon Church and its leaders have made no movement in their teachings toward a more orthodox Christian stance. The only change that has occurred is that a member of that denomination just happened to acquire his party’s presidential nomination, and was thus poised to challenge and perhaps unseat an incumbent administration despised by the Christian Right. Rather than risking division in evangelical ranks at the polls, or seeing large numbers of their flock just stay home in despair at the choice confronting them, those who have so often rebuked the moral and theological compromise in today’s world chose to craft an unbelievable compromise of their own.

Like the pursuit of material wealth, the quest for temporal power is a dangerous thing. Once large numbers of conservative Christians decided politics was a convenient venue for furthering their goals, the political imperative of winning at all cost began to supersede the sanctity of sound doctrine. The effective surrender of Protestant principles as a means of cementing an alliance between evangelicals and Roman Catholics was one major step in this process.9 Now the ecumenical hand is stretched across the gulf to clasp the hand of a religious movement long recognized for its opposition to key principles of classic Christianity. Sober reflection constrains the thoughtful observer to ask, If conservative evangelicals are prepared to ignore biblical conflict with Mormon theology for the sake of present political convenience, how many other biblical teachings might they sacrifice in the future, should expediency so demand?

Following the Grahams’ announcement, one headline read “Franklin and Billy Graham Sell Their Souls for a Mess of Republican Pottage.”10 It is difficult if not impossible to argue with this assessment. Like the Esau story of old, there is surely a consequence of these concessions.

9 See “Evangelicals and Catholics Together: The Christian Mission in the Third Millennium,” First Things, May 1994.