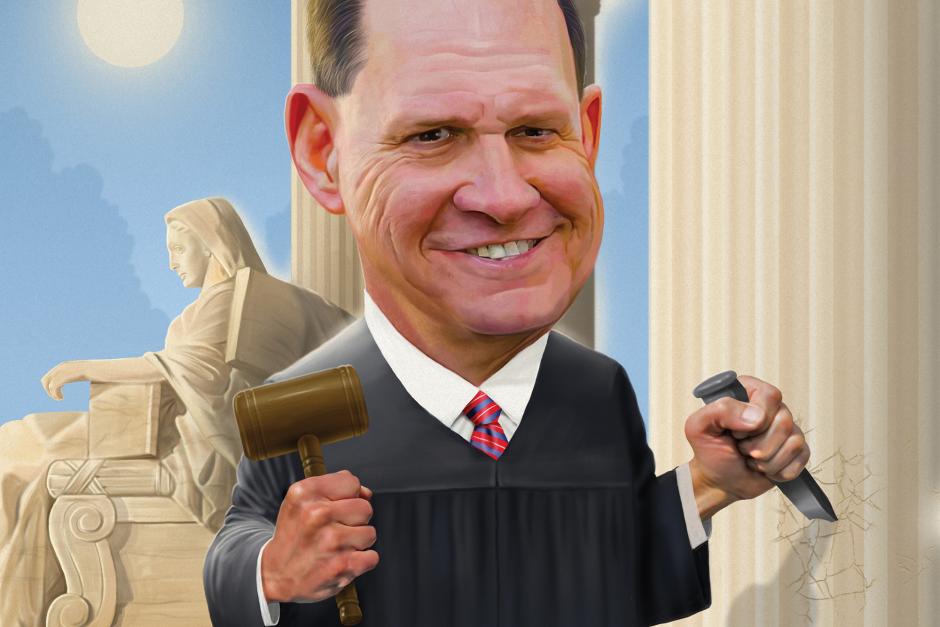 The Judicial Revolt of Roy Moore

Roy Moore, the chief justice of the Alabama Supreme Court, has had run-ins with the federal judiciary before, but never with the Supreme Court of the United States. That changed in February, when the High Court, without explanation, refused to halt the wave of same-sex weddings about to overtake Alabama after a federal judge and an appellate court let stand a ruling striking down the state’s ban on same-sex marriage.

What happened afterward with Moore, his subordinate judges, and gay nuptials across the state can be best described as constitutional chaos, bringing to mind Alabama’s own dark past in fighting back constitutionally decreed desegregation. But to make sense of it—and to understand how it all fits in the future of same-sex marriage in America—some context is necessary.

The original decision invalidating Alabama’s prohibition on same-sex marriage, by U.S. District Judge Callie V. Granade, appears to have sent Moore into crisis mode. In late January, a few days after Granade’s ruling, Moore penned a letter to Governor Robert Bentley raising red flags about “serious, legitimate concerns about the propriety of federal court jurisdiction” over Alabama laws, but he also noted that those laws “have always recognized the biblical admonition stated by our Lord.” Moore quoted Christ’s words in Mark 10:6-9, notable for its famous marriage pronouncement: “What therefore God hath joined together, let not man put asunder.”

Moore didn’t only cite Scripture. His reasoning rested on historic precedents from his own court, including a nineteenth-century decision calling marriage “a divine institution,” one that requires contracting spouses to observe “higher moral and religious obligations than those imposed by mere human institution or government.” He chastised the federal courts for the “destruction” of marriage, and disparaged federal judges’ reliance on equal-protection and due-process principles enshrined in the Constitution as mere “specious pretexts.”

Strong language, no doubt, though unclear if Bentley heeded any of it. The state certainly drew strength of its own to fight Judge Granade’s ruling all the way and to get the Supreme Court involved, if necessary. (This was a purely procedural battle; the aim was to stop the ruling from taking effect while the merits of the appeal ran their course through the judicial chain, a much lengthier process.)

In the days Alabama awaited a response from the justices, Moore—once again on his own—relied on his post as the state’s top elected judicial official and issued a memorandum “to assist weary, beleaguered, and perplexed probate judges to unravel the meaning of the actions of the federal court in Mobile.” He reasoned that Granade’s order had “created a situation adversely affecting the administration of justice within the state,” and that he, as the chief administrator of the Alabama courts, needed to bring order. More substantively, Moore reasoned that Granade’s  decision ran afoul of the state’s sovereignty to set its own priorities with respect to the institution of marriage—an area in which federal law virtually has no say—and that Alabama judges cannot be bound by a lowly federal judge’s views on same-sex marriage.

Moore’s legal standing has been debated by scholars and commentators, with some agreeing that a lone federal court decision is insufficient to trigger a state’s compliance in a dispute where the constitutionality of a statute is a stake. But Moore didn’t limit himself to legal arguments. In a letter accompanying his memorandum to state probate judges—urgently titled “Federal Intrusion Into State Sovereignty”—he again appealed to the greater authority of God in establishing the “sacred relation” of marriage, as divined from stray passages of old judicial precedents, none more recent than 1908. Tellingly, he also quoted key passages from the Alabama constitution that Granade had voided, and again complained that “lower federal courts” lack “legitimate authority to compel state courts to redefine marriage to include persons of the same sex.” He made clear who does: “Only the Supreme Court of the United States can be the final arbiter of constitutional disputes between the states and federal courts.”

And the Supreme Court did have its say, but not on Moore’s terms, as he was never a party to the original lawsuit. With legal confusion looming for same-sex couples across the state—Granade had set a February 9 deadline for her ruling to go into effect—the court instead ruled on a request by Alabama Attorney General Luther Strange, who had slightly more pragmatic reasons to implore a stop to same-sex weddings. Since the Supreme Court had already agreed to rule on the constitutionality of same-sex marriage by June, there was no need to disrupt the status quo in Alabama. In other words, why not wait it out until the Court issues a final ruling that applies to the whole country.2

The Supreme Court didn’t buy it: A majority of justices refused to block Judge Granade’s ruling. Same-sex marriage was coming to Alabama on February 9. The refusal did not come without opposition. In a blistering dissent, Justice Clarence Thomas, one of the Court’s conservative stalwarts and the justice in charge of emergency requests from Alabama, wrote that the rebuff “represents yet another example of this Court’s increasingly cavalier attitude toward the states.” He blasted his colleagues for not being consistent in selecting which same-sex marriage decisions to block, noting two prior occasions during which the Court had done just that, in cases presenting circumstances not unlike Alabama’s. “Those decisions reflected the appropriate respect we owe to states as sovereigns and to the people of those states who approved those laws,” Thomas wrote.

But Thomas didn’t stop there. He agreed with the Alabama attorney general that preserving “the status quo” is an important interest, especially in light of United States v. Windsor—the case that in 2013 ruled unconstitutional the federal Defense of Marriage Act. That decision was only binding on the federal government, but in its wake, dozens of federal judges relied on it to invalidate same-sex marriage bans across the country. Thomas suggested that the Court’s reluctance to intervene in Alabama hinted at the inevitability of same-sex marriage nationwide: “This acquiescence may well be seen as a signal of the Court’s intended resolution of that question.” He closed his rejoinder by stating that he “would have shown the people of Alabama the respect they deserve and preserved the status quo while the Court resolves this important constitutional question.”

It hasn’t been a smooth road since. After some confusion among state probate judges about whether to accept the legality of same-sex marriage in the state, the Alabama Supreme Court stepped in and issued a stunning 134-page opinion in early March, ordering them not to issue marriage licenses to same-sex couples. (Moore’s prior pronouncements had only been advisory.) More stunning still, the court called the Supreme Court’s Windsor decision a “legal proxy for invalidating laws that federal judges do not like”—a direct affront to Judge Granade, but also to the Supreme Court, which is poised to rule definitively on the constitutionality of gay marriage. Moore has gone on to say that a national win for same-sex couples would be one of the Supreme Court’s “greatest mistakes”—right along with decisions affirming slavery, racial segregation, and abortion rights.

For all the big rhetoric, there might be a kernel of truth to what Moore is saying—the bigger picture of an otherwise chaotic controversy. If there’s a lesson Alabama’s defiance has left us, it’s that there is a real possibility that the Supreme Court could make a huge mistake on gay marriage. And the mistake has nothing to do with whether the Court will rule same-sex couples have a constitutional right to marry (that seems inevitable), but what path it will take to reach that result. Scholars have identified at least four routes the Court could take.

The route chosen is important because the Supreme Court, despite its prior edicts on the rights of gays and lesbians, has been extremely cautious in those rulings, almost to a fault. Consider Windsor, the case the Alabama Supreme Court lambasted. In that decision Justice Anthony Kennedy—and the author of all prior gay-rights opinions—had really nice things to say about the dignity of same-sex couples, and chastised the United States government for enforcing a law, the now-void Defense of Marriage Act, whose “principal purpose is to impose inequality.”

All well and good, but there was something else hidden in Windsor that is oddly reminiscent of Alabama and its renegade top judge. While asserting the dignity of same-sex couples, the Supreme Court also threw a major bone to the states—in this case, the state of New York, which had legalized gay marriage and thus stood in conflict with the federal government. In various sections of Windsor the Court reaffirmed time and again that the states retain autonomy to regulate marriage, that “each state as a sovereign has a rightful and legitimate concern in the marital status of persons domiciled within its borders.” That sounds a lot like Moore’s legal reasoning for refusing to comply with federal law.

Contrast that question with Justice Thomas’ stinging words for his colleagues in his February dissent. How do you rule for a national constitutional right to marriage for gays and lesbians, while acknowledging your respect for the states’ democratic choices? What’s more valuable, the rights of the LGBT community, or state sovereignty in the realm of family matters?

This battle between federalism and individual rights is as old as the Constitution itself. And in a tortured effort to preserve that tension, it is not outside the realm of possibility that the Supreme Court, once again, will bend over backwards to issue a decision that is as conclusive as it is polarizing: a ruling that recognizes a right to marriage equality across the country, while leaving the states and people like Roy Moore room for future rebellions.

And what might those rebellions look like? Look no further than the wave of religious-freedom bills making headlines in Indiana and Arkansas. Lawmakers and governors insist that the only purpose animating those legislative efforts is the protection of religious liberty for state citizens. But public outcry from the LGBT community and even corporate giants suggests otherwise: that the freedom these bills promote is also the freedom to discriminate against gays and lesbians, newly emboldened by the sweep of court rulings invalidating same-sex marriage bans. Now that the Supreme Court is gearing up to have the final say, expect legislatures to keep a close eye on what exactly the Court will say. Because those words will determine whether run-ins between states’ rights and gay rights are only limited to Alabama, or they’re simply a feature—not a bug—that America will have to live with for years to come.

Cristian Farias is a journalist and lawyer who writes about civil rights and legal affairs.